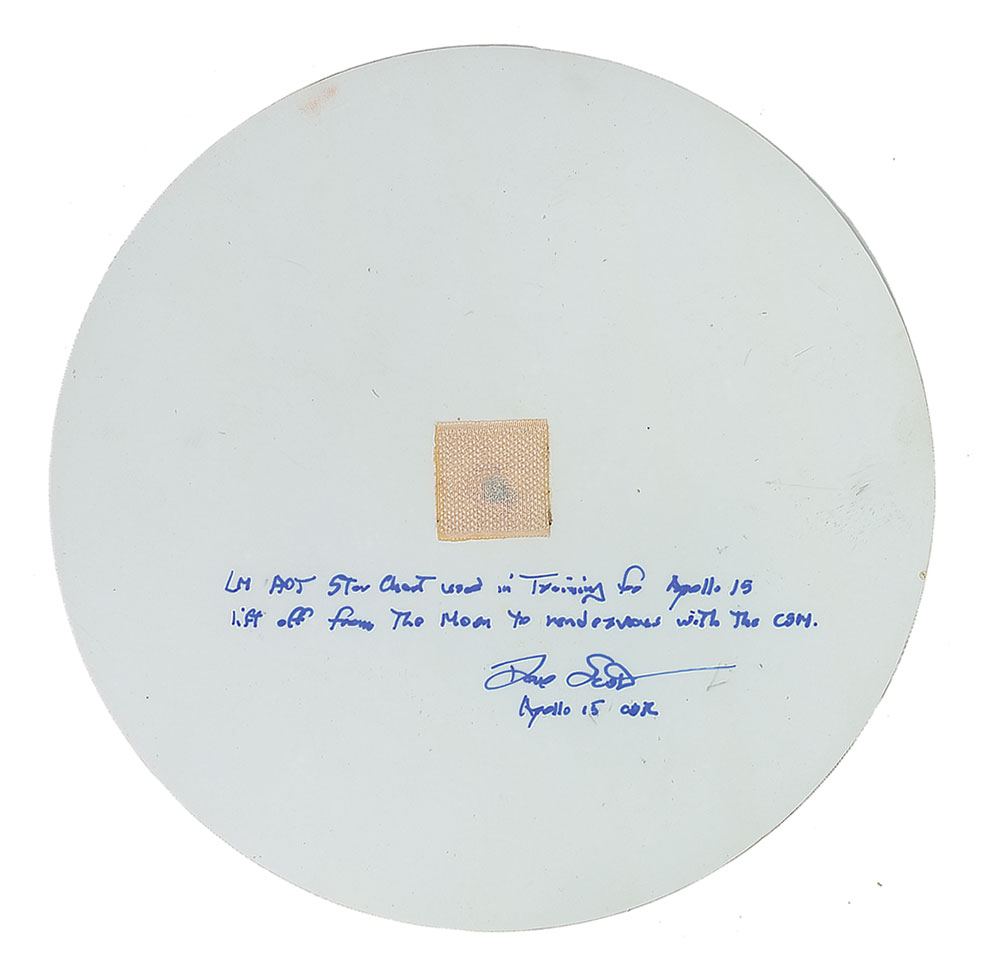 Rotating circular star chart used in training for the Apollo 15 mission, measuring 8.25″ in diameter, signed on the reverse in blue felt tip, “LM AOT Star Chart used in training for Apollo 15, lift off from the moon to rendezvous with the CSM. Dave Scott, Apollo 15 CDR.” In fine condition. Accompanied by a detailed signed letter of provenance from Dave Scott, in part: “I hereby certify that the Lunar Module Star Chart included with this letter was used during our 20 months of training for Apollo 15, the first extended scientific exploration of the Moon, July 26-August 7, 1971…The navigation of Apollo spacecraft was based on using the stars in a form of classical celestial navigation. For most applications the spacecraft would be maneuvered such that an onboard optical device (the ‘Alignment Optical Telescope,’ or AOT) could be used to sight specific stars—the information would then be used to determine the orientation of the spacecraft relative to an onboard ‘inertial platform’ (or ‘stable table’)…

However, when the LM was stationary on the surface of the Moon, to maneuver the spacecraft to point and track a selected star through the AOT was not possible. Therefore, a clever concept of tracking stars as they passed through the AOT field of view was devised (the LM was stationary, hence the stars moved relative to the LM)…The AOT gave the astronauts a choice of six fields-of-view, each 60 degrees wide and with the centers separated by 60 degrees. The AOT could not be moved continuously but only from one fixed position (called a detent) to another. The two piece star chart included with this letter consists of a black base disk with all of the stars visible within the hemisphere above the LM, on top of which is a rotatable semi-transparent disk with six circular ring displays, each of which represents a 60 degree field of view, selected by a detent position on the AOT.

The circular rings on the transparent disk are actually AOT viewfinder areas that show the specific stars that would appear in the AOT field of view at six specific times on the lunar surface during a mission. The white dots on the black base disk are specific stars that are used for navigation (stored in the LGC) and for location and identification, lines are drawn between certain stars to form familiar constellations…The Star Chart included with this letter was used to align the AOT in the LM simulator during our 20 months of training…This Apollo 15 Star Chart (training) has been in my personal collection since returning to Earth.” Highlighted by Scott’s Galilean hammer-feather experiment and the initial employment of the lunar rover vehicle, the Apollo 15 mission, the first of the three ‘J missions,’ proved a marked and record-breaking success, setting a new benchmark for all future Apollo missions. Augmented by the strength of Scott’s fascinating provenance letter, this training star chart exists as an uncommon celestial navigation resource used over the span of several months of rigorous training. Stemming from the personal collection of the Apollo 15 commander, this chart was an integral learning tool and backup plan for one of NASA’s most complex and informative endeavors. Pre-certified Zarelli Space Authentication.