To General Andrew Jackson upon his unauthorized invasion of Spanish Florida 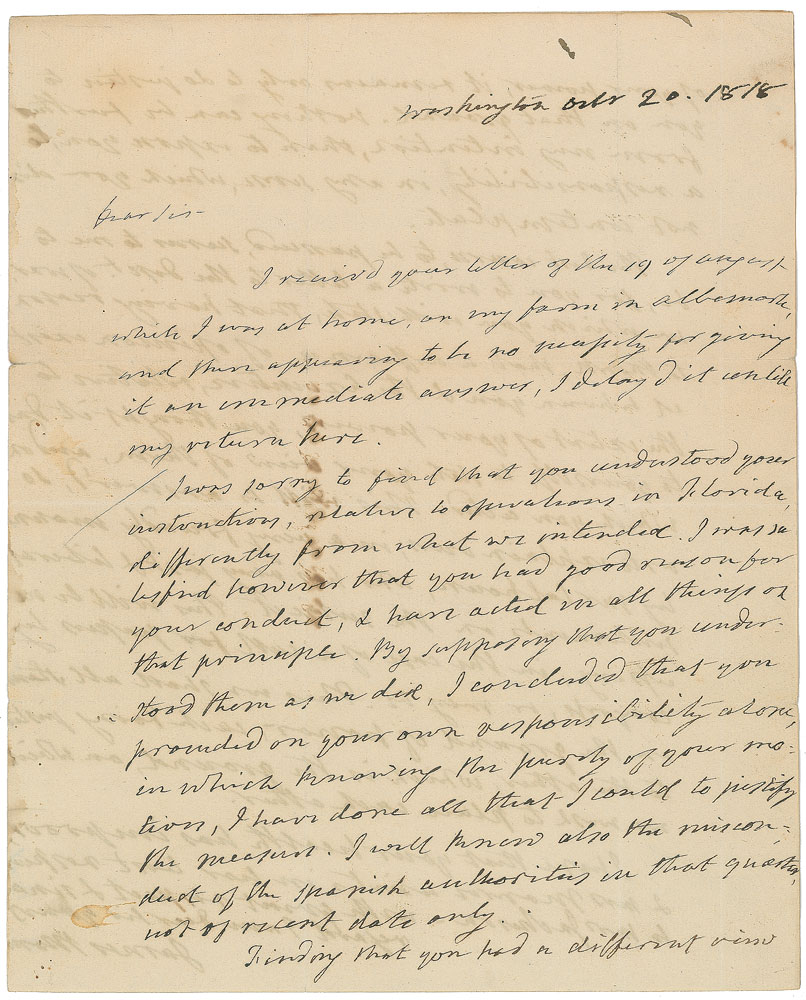 To General Andrew Jackson upon his unauthorized invasion of Spanish Florida

ALS as president, one page both sides, 8 x 9.75, October 20, 1818. Letter to General Andrew Jackson regarding affairs in Florida. In full: “I received your letter of the 19th of August, while I was at home, on my farm at Albermarle, and there appearing to be no necessity for giving it an immediate answer, I delayed until my return here. I was sorry to find that you understood your instructions, relative to operations in Florida, differently from what we intended. I was satisfied, however, that you had good reason for your conduct, and I have acted in all things on that you did proceed on your own responsibility alone, in which knowing the purity of your motion, I have done all that I could to justify the measure. I well knew also the misconduct of the Spanish authorities in that quarter, not of recent date only. Finding that you had a different view of your power, it remains only to do justice to you on that ground. Nothing can be further from my intentions, than to expose you to a responsibility in any sense which you did not contemplate. The best course to be pursued seems to me to be for you to write a letter to the Dept. of War, In which you will state, that having reason to think that a difference of opinion existed between you and the Executive, relative to the extent of your powers you thought it just to yourself to state your views of them, and on which you acted. This will be answered, so as to explain ours, in a very friendly manner by Mr. Calhoun, who has very just and liberal sentiments on the subject. This will be necessary in the case of a call for papers by Congress, or may be. Thus we shall all stand on the ground of honor, each doing justice to the other, which is the ground on which we wish to place each other. I hope that your health is improved, and Mrs. Monroe wishes to send her best respects to Mrs. Jackson.” In very good to fine condition, with slight splitting along bottom hinge affecting the “r” in “Monroe.”

President Monroe had ordered Jackson to the Florida border to fend off incursions into American territory by Seminole and Creek Indians. Liberally interpreting these instructions, Jackson launched an invasion into Florida and captured a Spanish fort at St. Marks, took control of Pensacola, and deposed the Spanish governor. News of Jackson’s exploits caused a stir in Washington and many called for official censure of his actions; a Constitutional controversy also ensued over the question of whether President Monroe had authorized an act of war without the approval of Congress. After much debate the House of Representatives voted down all resolutions condemning Jackson, implicitly endorsing Monroe’s actions and leaving the issue surrounding the role of the executive with respect to war powers unanswered.