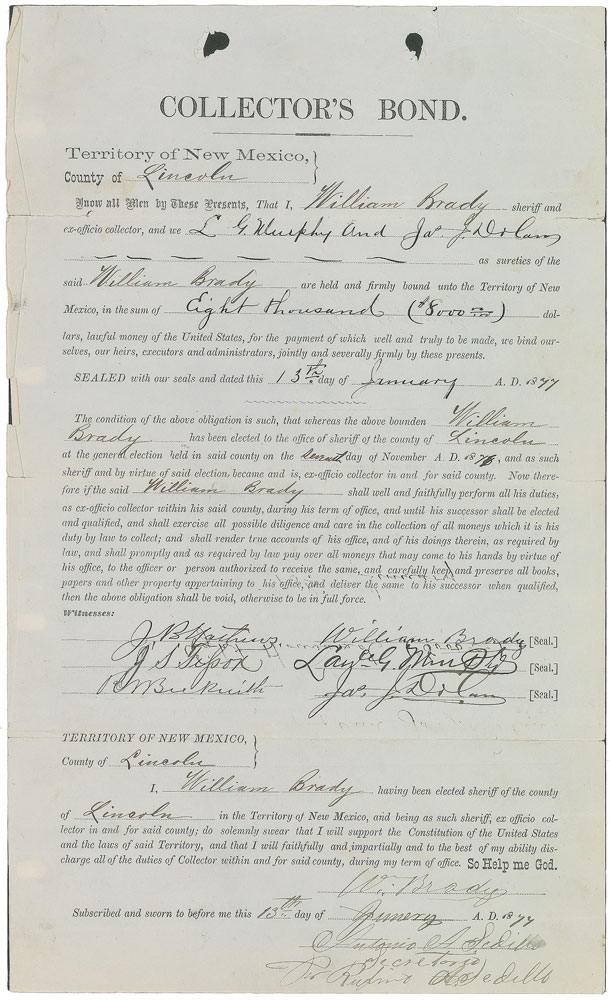 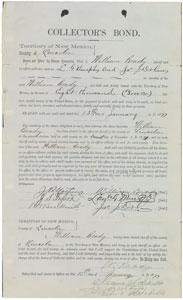 Extremely rare partly-printed DS, signed “William Brady,” one page both sides, 8.5 x 14, January 13, 1877. Collector’s bond issued in the Lincoln County, New Mexico, in part: “Know all Men by These Presents, That I, William Brady sheriff and ex-officio collector, and we L. G. Murphy and Jas. J. Dolan as sureties of the said William Brady are held and firmly bound unto the Territory of New Mexico, in the sum of Eight thousand ($8,000.00) dollars.” Signed at the conclusion by William Brady, Jacob Basil Mathews, Robert W. Beckwith, James J. Dolan, Lawrence G. Murphy, and one other. In fine condition, with a few small tears to edges. Accompanied by a packet of biographical information.

This remarkable Old West document is signed by some of the key players in the Lincoln County War, namely Brady, Murphy, and Dolan. William J. Brady was the sheriff of Lincoln County before being killed in an ambush by Billy the Kid and his gang in 1878. He had sided with the corrupt Murphy-Dolan faction in the conflict, which put him up against rancher John Tunstall’s hired gunmen including Dick Brewer, Doc Scurlock, and Billy the Kid. The Lincoln County War made Billy famous and served as the inspiration for countless movies and western-themed fictional tales. Pre-certified PSA/DNA.