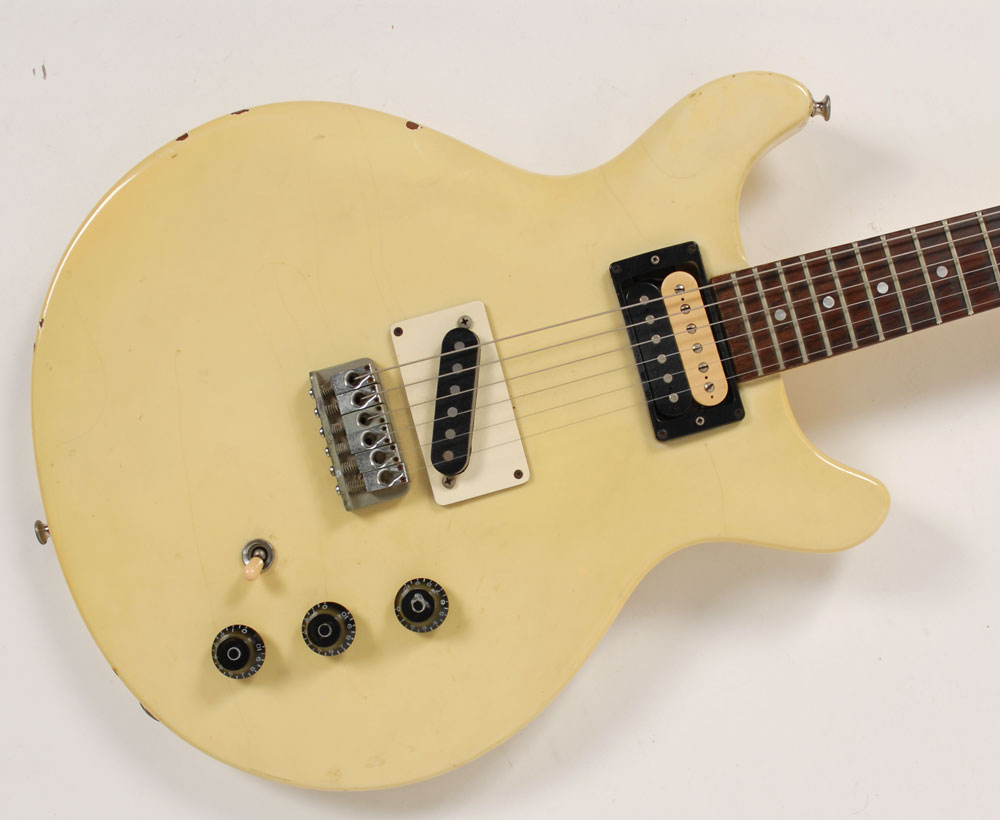 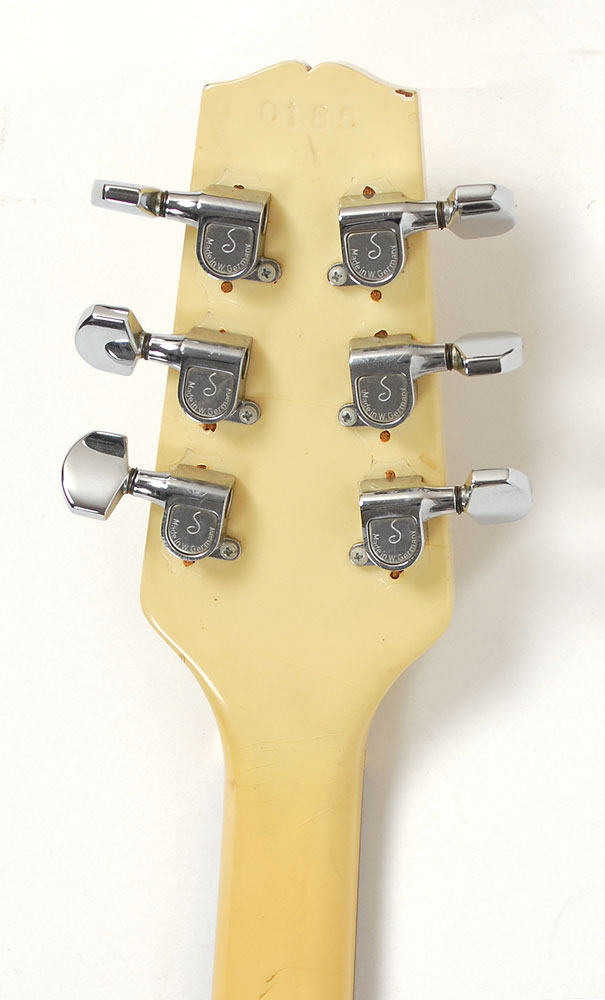 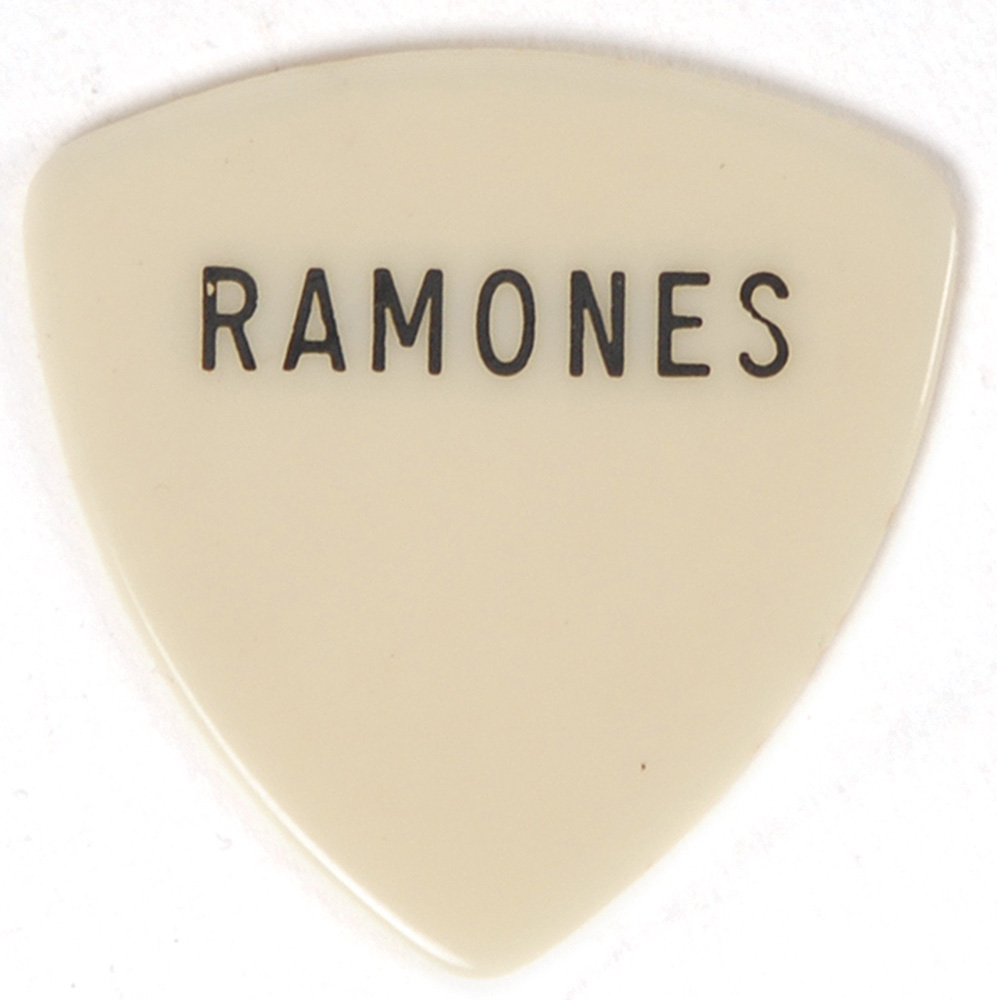 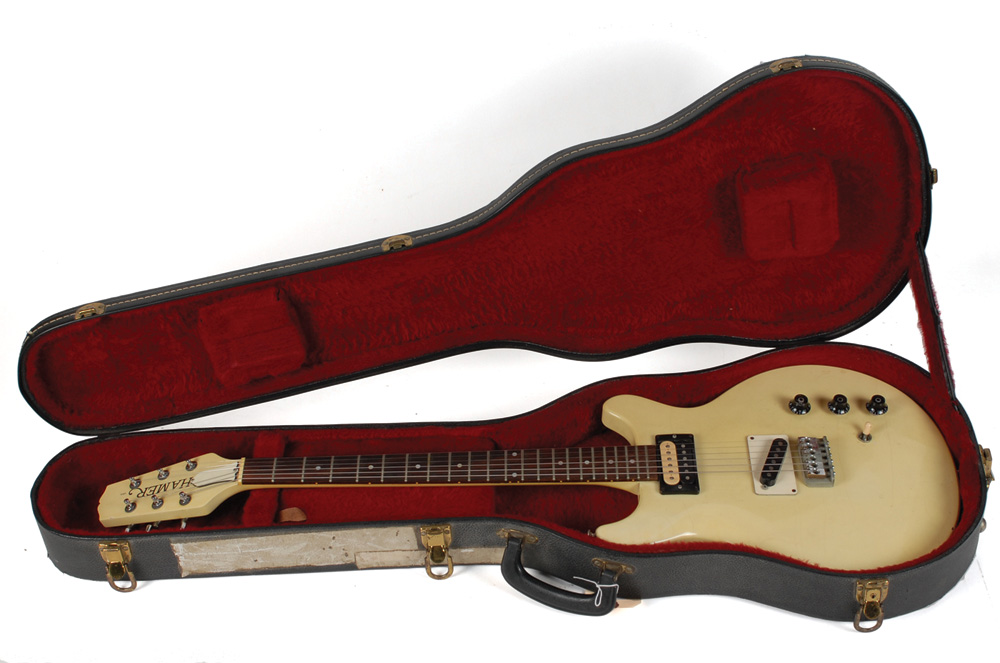 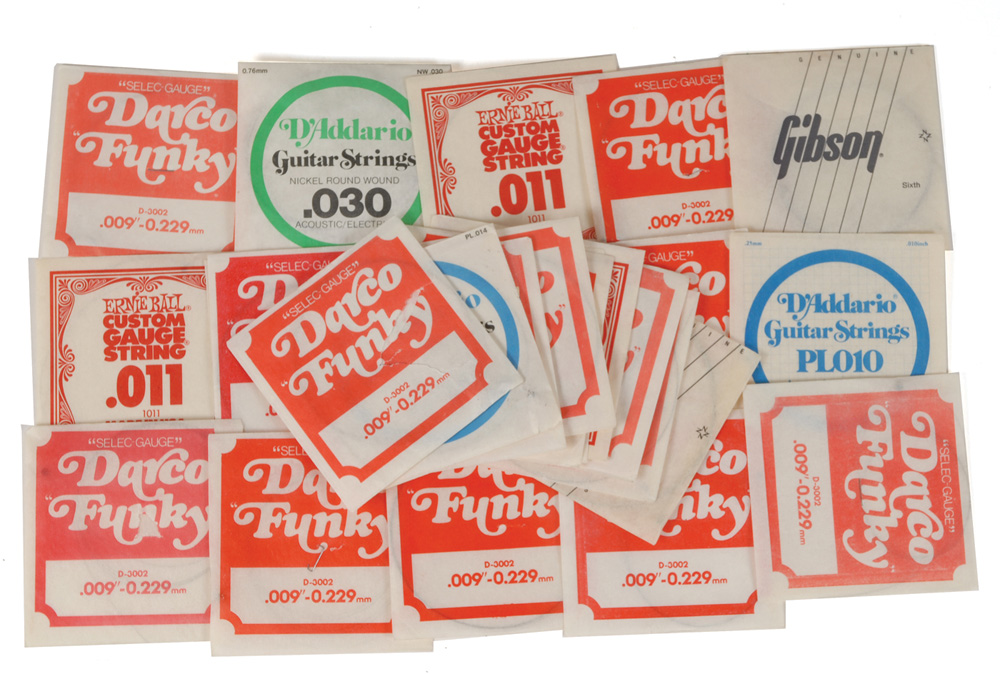 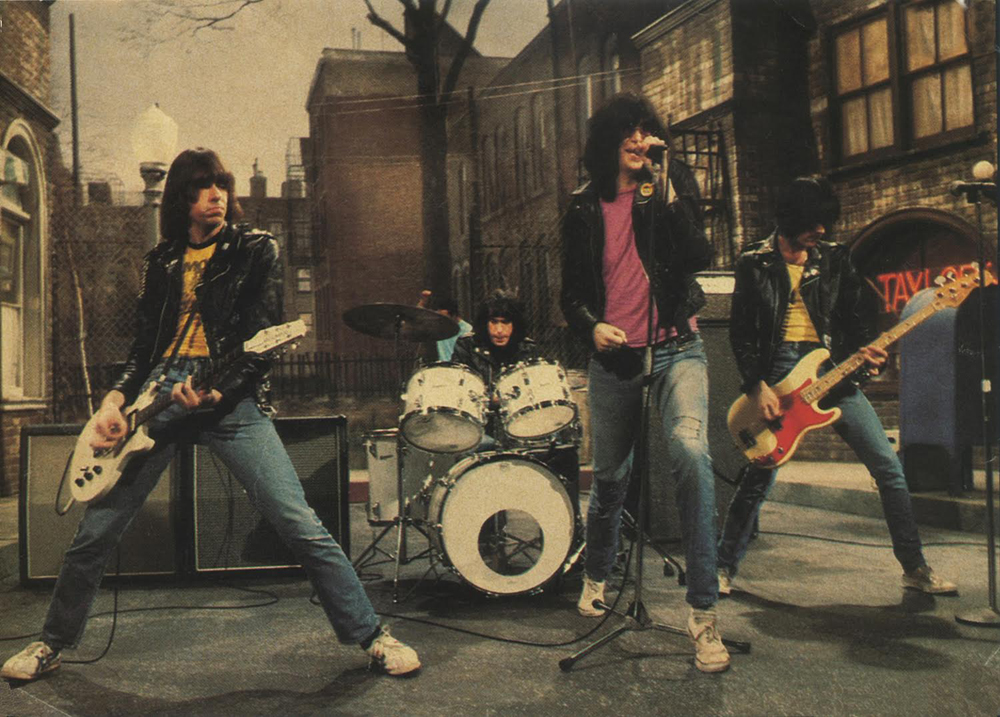 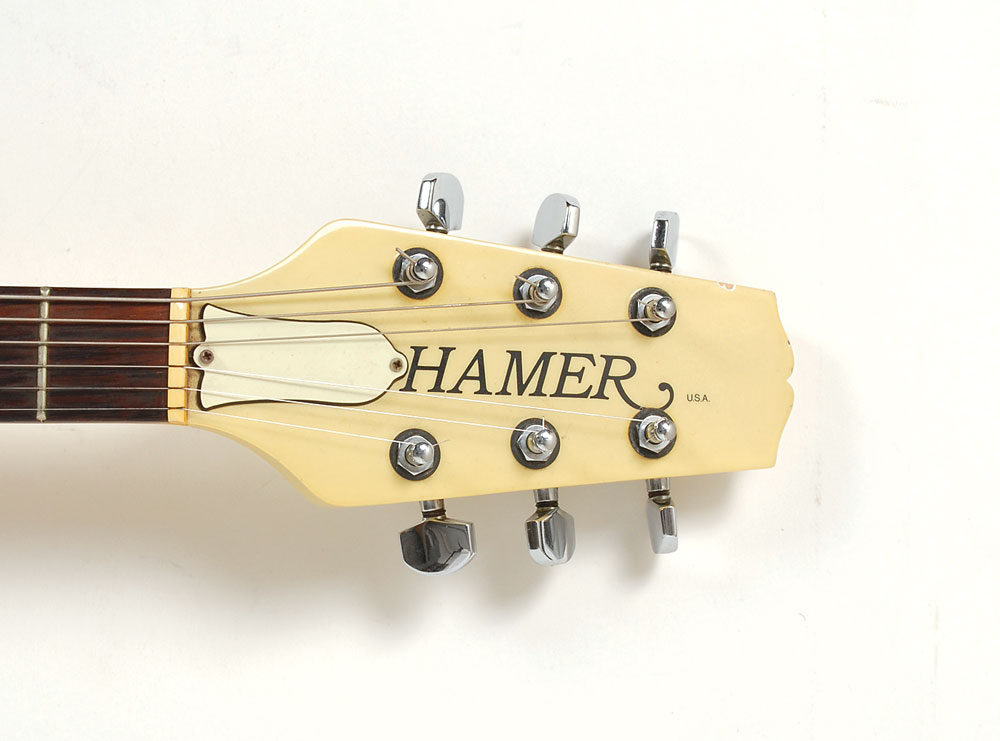 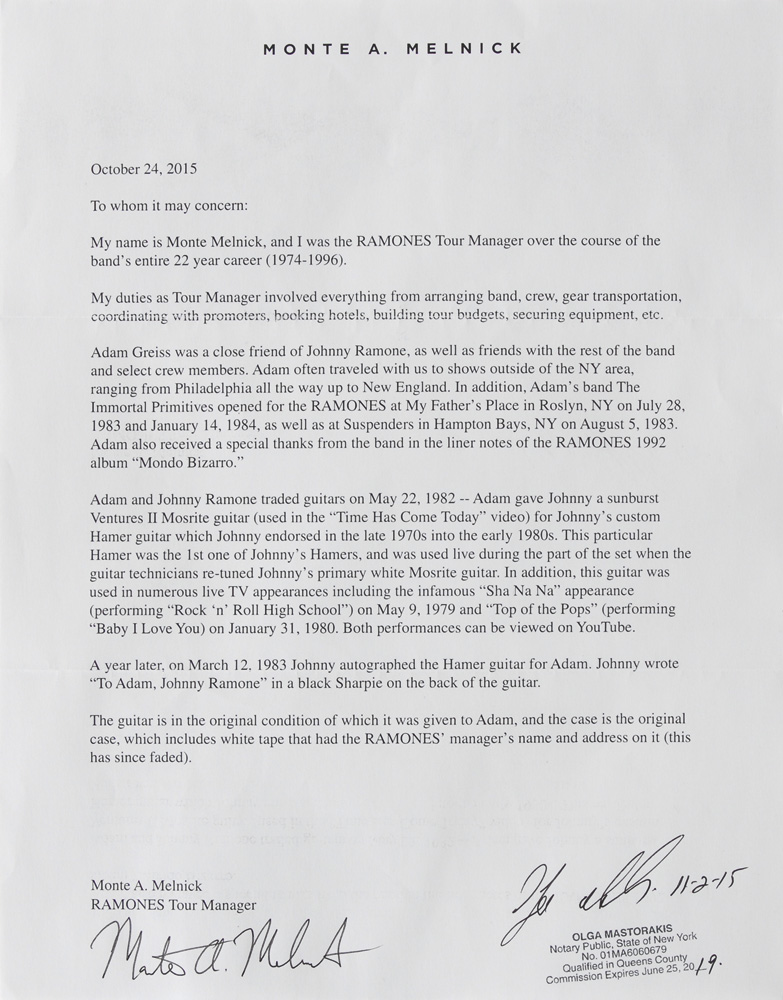 Johnny Ramone’s personally-owned and stage-used vintage white Hamer right-handed custom electric guitar, embossed with its serial number on the reverse of the headstock, “0185,” and signed and inscribed on the back in black felt tip, “To Adam, Johnny Ramone.” Featuring deep body contours and a larger, more flared headstock than found on stock Hamer special models, this ‘special’ lightweight Hamer guitar was designed to fit the specific needs of Ramone. The guitar’s original bridge humbucking pickup was removed and a single coil pickup installed on a cream-colored mounting plate. Additionally, the original Kluson tuning machines were later replaced with Schallers; the old tuner impressions remain visible on reverse of headstock. The presence of the “0185” serial number suggests that this model was subcontracted by an ex-partner of Hamer, as no matching four-digit code exists in the factory logs alongside the other Ramone-specific Hamers. Includes its original modified Hamer hardshell case, with the neck pocket housing an off-white Ramones guitar pick and an assemblage of guitar strings, with several by Darco Funky, Ramone’s string of choice. In fine condition, with expected yellowing to body finish. Oversized. All of the modifications to the Hamer were made by Johnny Ramone’s team per his specific request.

Accompanied by a notarized certificate of authenticity from close friend and Ramones expert Chris Lamy, as well as a notarized letter of provenance from Monte Melnick, the longtime tour manager of the Ramones, the latter, in part: “Adam Greiss was a close friend of Johnny Ramone, as well as friends with the rest of the band and select crew members. Adam often traveled with us to shows outside the NY area, ranging from Philadelphia all the way up to New England…Adam and Johnny Ramone traded guitars on May 22, 1982—Adam gave Johnny a sunburst Ventures II Mosrite guitar (used in the ‘Time Has Come Today’ video) for Johnny’s custom Hamer guitar which Johnny endorsed in the late 1970s into the early 1980s. This particular Hamer was the first one of Johnny’s Hamers, and was used live during the part of the set when the guitar technicians re-tuned Johnny’s primary white Mosrite guitar…A year later, on March 12, 1983 Johnny autographed the Hamer guitar for Adam.” Ramone played and toured with this instrument extensively for three years, performing on-stage and during various live TV appearances such as the band’s infamous Sha Na Na appearance on May 9, 1979, and the Top of the Pops show on January 31, 1980. According to Lamy and Hamer guitars founder Jol Dantzig, this customized guitar represents the first piece of gear endorsed by any of the Ramones, and is enhanced furthermore by its unique and historic distinction as being the very first custom-designed Hamer guitar delivered to the legendary punk rock guitarist. An amazing one-of-a-kind piece. From the Punk Rock Collection of Adam Greiss. Pre-certified REAL.

This item is Pre-Certified by Real
Buy a third-party letter of authenticity for $35.00