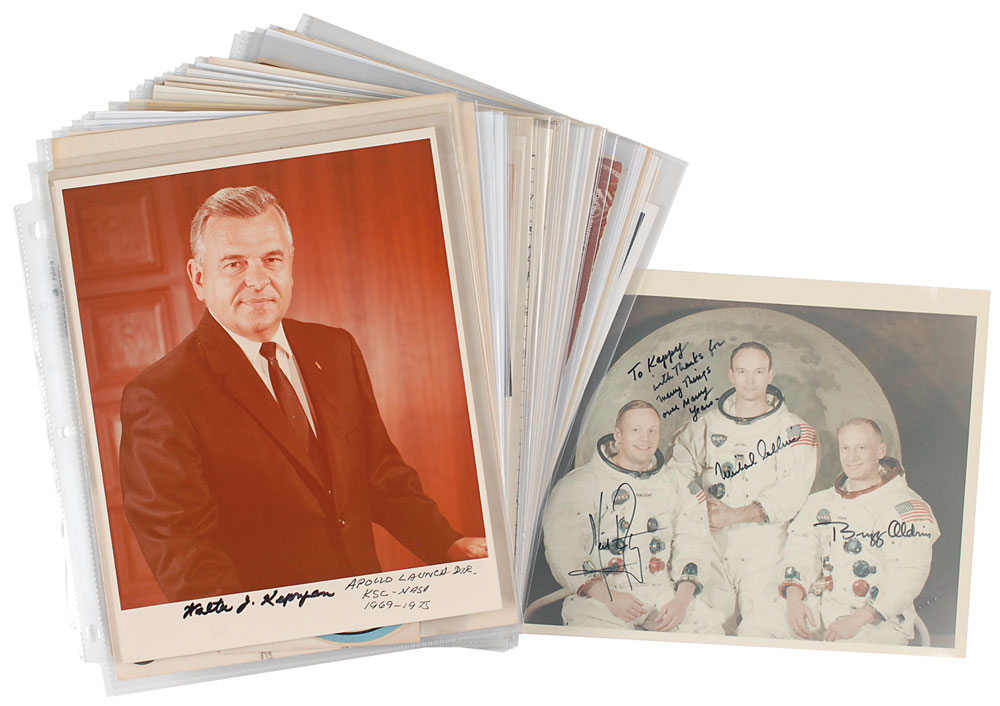 An unmistakably unique archive of material from the personal collection of Space Age pioneer Dr. Walter J. Kapryan, the Apollo Launch Director at Kennedy Space Center from 1969 to 1975. The archive is comprised of well over one hundred items, consisting of signed and unsigned photos, letters, papers, pamphlets, and other ephemera related to his work. Kapryan was the highest ranking authority when it came to all manned spaceflight launch operations from Apollo 12 to ASTP. During the earlier Apollo missions he worked as the deputy director before taking over shortly after Apollo 11. The signed highlights of the collection include:

Exceedingly rare fully signed vintage official color glossy 10 x 8 NASA photos of the prime crews of Apollo 7, 9, 11, 13, 14, and 16, all with “A Kodak Paper” watermarks on the reverse (except the mounted Apollo 16), all fully signed in various inks and thoughtfully inscribed to Kapryan. It is believed that the Kennedy Space Center distributed no more than 25 of these signed color glossy NASA photos prior to launch, given as tokens of appreciation to those who made the missions possible. These include:

Additional signed items include: NASA lithographs of Walt Cunningham and Ron Evans, each signed and inscribed to Kapryan; TLSs from Alan Shepard, Michael Collins, Charles Conrad, and Jim Irwin; an invitation to the Skylab 3 liftoff, signed by Alan Bean, Owen Garriott, and Jack Lousma; and four photos signed by Kapryan himself.

The rest of the archive is comprised of papers from Kapryan’s career, including notes, memos, and letters; certificates honoring his achievements; booklets, decals, and schedules; unsigned photos; NASA access passes; and various other ephemera. Several of these items are signed by Kapryan as being from his collection. Some general expected wear, otherwise overall fine condition.

Kapryan—an integral personage in the history of NASA—recently passed away on August 14, 2015, at the admirable age of 95. Many of the items in this collection are sought-after rarities by themselves, and as a complete group represent the pinnacle of the Apollo program and manned spaceflight. Coming from a NASA official critical to the success of these important missions, this archive not only has rock-solid provenance but offers an association of great historical significance. It is a truly remarkable assemblage worthy of the finest collections. Pre-certified Zarelli Space Authentication.