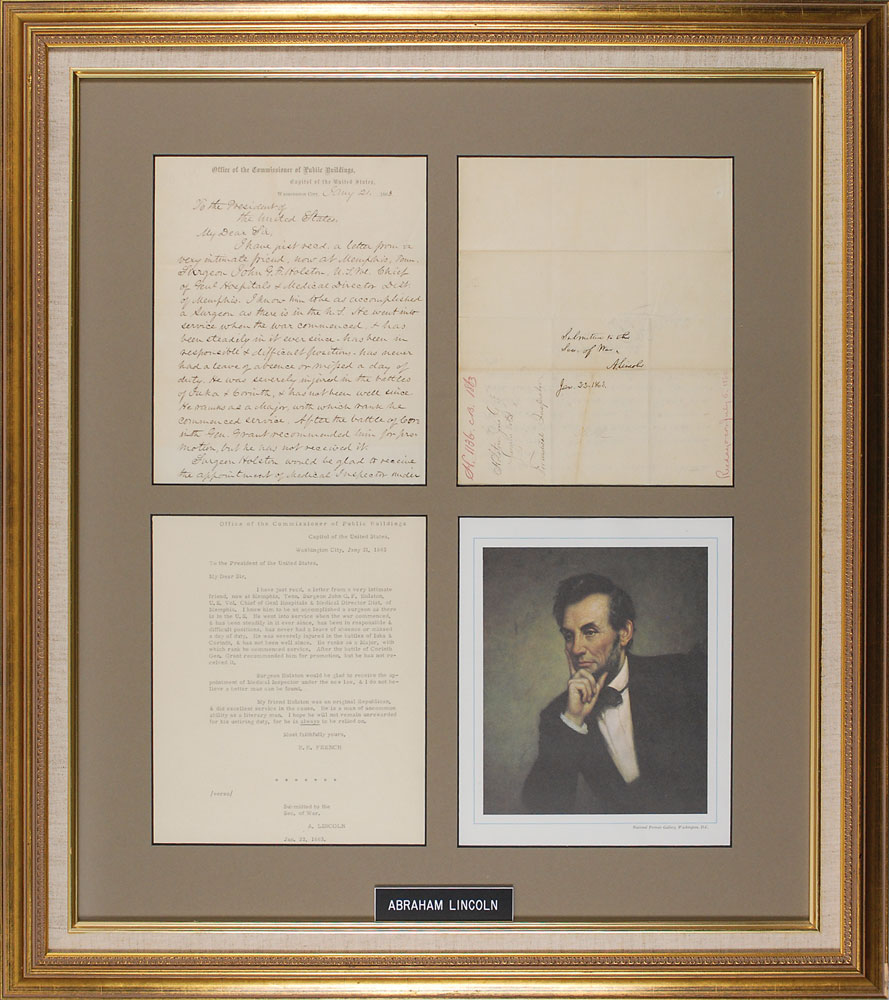 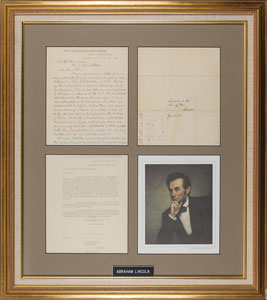 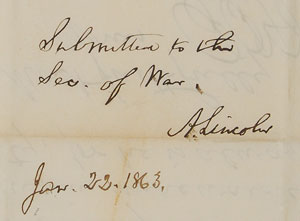 Bold handwritten and signed endorsement as president, "Submitted to the Secretary of War, A. Lincoln, Jan. 23, 1863," penned on the reverse of a letter sent to him by Benjamin Brown French, two pages, 7.75 x 9.5, Office of the Commissioner of Public Buildings letterhead, January 21, 1863. French's letter, in part: "I have just recd. a letter from a very intimate friend, now at Memphis, Tenn. Surgeon John G. F. Holston…I know him to be as accomplished a surgeon as there is in the U. S. He went into service when the war commenced…has been in responsible & difficult positions, has never had a leave of absence or missed a day of duty. He was severely injured in the battles of Iuka & Corinth, & has not been well since…After the battle of Corinth Gen. Grant recommended him for promotion, but he has not received it. Surgeon Holston would be glad to receive the appointment of Medical inspector…I do not believe a better man can be found…My friend Holston was an original Republican, & did excellent service in the cause…I hope he will not remain unrewarded for his untiring duty, for he is always to be relied on." Matted and framed with a color portrait, transcript, and nameplate affixed to the glass to an overall size of 25.75 x 29. In fine condition, with intersecting folds and light toning (a line of toning through the date in Lincoln's endorsement). Oversized.

On October 5, 1862, surgeon John G. F. Holston wired the headquarters of General Grant to relay casualties and losses incurred during the horrific two-day Battle of Corinth—‘am wounded doing well…confed wounded dressed rapidly, their wounded much worse than ours…Men not so good as ours…all operations performed…all sick cared for.’ Impressed by the objectivity and skill with which Holston treated the scores of injured soldiers, Grant issued a recommendation for his promotion, adding that ‘the wounded, both friend and enemy, are much indebted to Surgeon J. G. F. Holston, Medical Director, for his untiring labors in organizing hospitals and providing for their every want.’ The promotion finally crossed the desk of President Lincoln and was swiftly approved at the start of 1863. This would also not be the last time Grant’s high consideration of Holston would come into effect; following his inauguration in the spring of 1869, President Grant appointed the former field surgeon as his own personal doctor, a position he would hold until his own death in 1876. A superlative wartime endorsement issued less than a month after the signing of the Emancipation Proclamation. Pre-certified PSA/DNA.