Historic 1959 Kennedy manuscript revealing his deep-seated presidential intentions: “I am announcing today my candidacy for the Presidency of the United States” 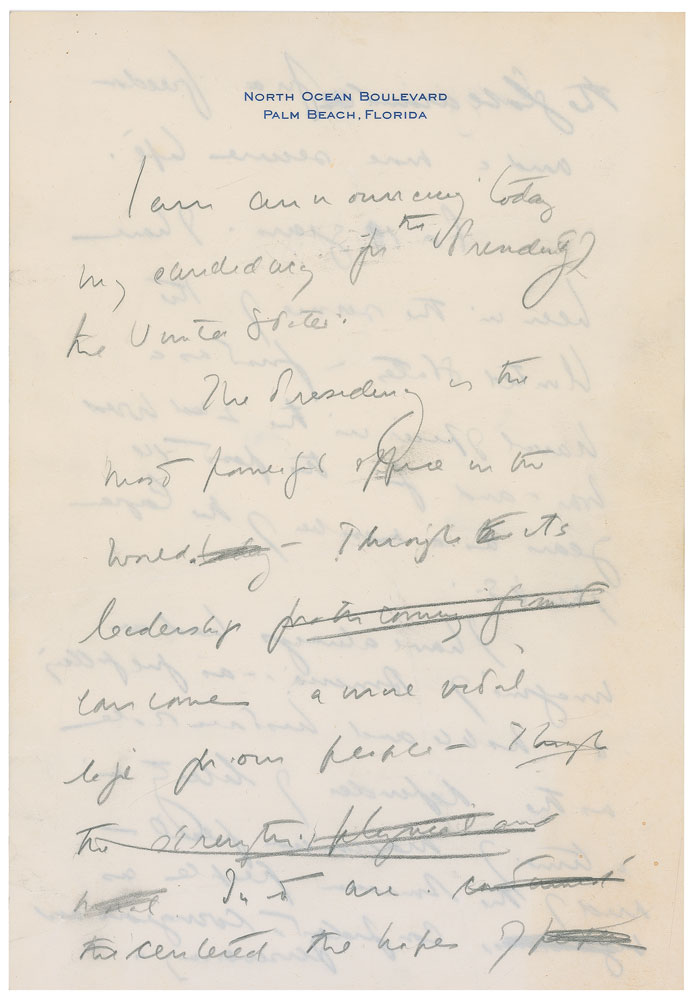 Historic 1959 Kennedy manuscript revealing his deep-seated presidential intentions: “I am announcing today my candidacy for the Presidency of the United States”

Astounding JFK-handwritten manuscript announcing his intention to run for president of the United States. Drafted in pencil, unsigned, three pages on two sheets, 7.25 x 10.5, North Ocean Boulevard, Palm Beach, Florida letterhead, no date but circa late 1959. Kennedy’s early draft of the speech. In full: “I am announcing today my candidacy for the Presidency of the United States. The Presidency is the most powerful office in the World. Through its leadership can come a more vital life for our people. In it are centered the hopes of the globe around us for a freedom and a more secure life. For 18 years I have been in the service of the United States, first as a naval officer in the 2nd World War, and for the past 14 years as a member of the Congress of the US. I have always had an image of America, as fulfilling a noble and historic role as the defender of liberty in a time of maximum peril—and of the American people as confident, courageous and persevering. I seek the Presidency for in that office in the next decade will be determined whether war or peace is to be our fate, and whether the heritage of freedom so forcefully guarded for us from our earliest beginnings can be spread through a war torn world.” Kennedy makes corrections throughout the text, striking through several words.

The handwritten manuscript is bolstered by a significant archive of additional step-by-step drafts of the speech, including two typescripts with further pencil corrections in Kennedy’s own hand, an additional three-page handwritten version on Palm Beach letterhead in an unknown hand, and four non-hand-amended typed drafts, including one titled, “December 8, 1959, Kennedy Announcement—Draft #2.” The final three are on onionskin; all seem to have slight variations to the text.

The first Kennedy-amended version is headed “TCS Draft,” two pages, 8.5 x 11, and differs dramatically from Kennedy’s handwritten draft. This version retains the sentiment of the first but offers greater specificity, as well as a direct mention of the Soviet Union. In part: “For it is in the Executive Branch that the most crucial decisions of this century must be made in the next four years—how to end or alter the burdensome arms race, where Soviet gains already threaten our very existence—how to maintain freedom and order in the newly emerging nations—how to rebuild the stature of American science and education—how to prevent the collapse of our farm economy and the decay of our cities.” Kennedy revises wording in several lines and also eliminates entire passages.

The second Kennedy-amended draft is three typed pages and most closely resembles the final draft of his announcement. Generously annotated by Kennedy throughout, in the closing paragraph, the future president writes in pencil, “In the last 20 years I have travelled to nearly every land…from Leningrad to Saigon, from Bucharest to Lima,” a line which appears almost verbatim in his final speech. Kennedy ends with the handwritten addition of a strong closing statement: “It is with this image that I begin this campaign.” In overall fine condition, with irregular intersecting folds to the Kennedy handwritten draft.

This remarkable step-by-step archive—highlighted by JFK’s initial handwritten draft—offers remarkable insight into the development of his candidacy announcement speech, which he gave in the US Senate Caucus Room on January 2, 1960. Elements of each draft are found in his final speech nearly word-for-word, including the opening lines from his handwritten draft as well as the notation about his international travel. The letterhead on the here-offered fully handwritten three-page draft is notable as it represents the Kennedy family’s Palm Beach estate: the site of JFK’s first formal campaign strategy meeting on April 1, 1959. Kennedy went on to secure the Democratic nomination in July and emerged victorious in the November elections, taking office on January 20, 1961. As Kennedy’s personal drafts for the speech that launched his iconic campaign, these are absolutely unique and of immense historical importance. Pre-certified PSA/DNA.