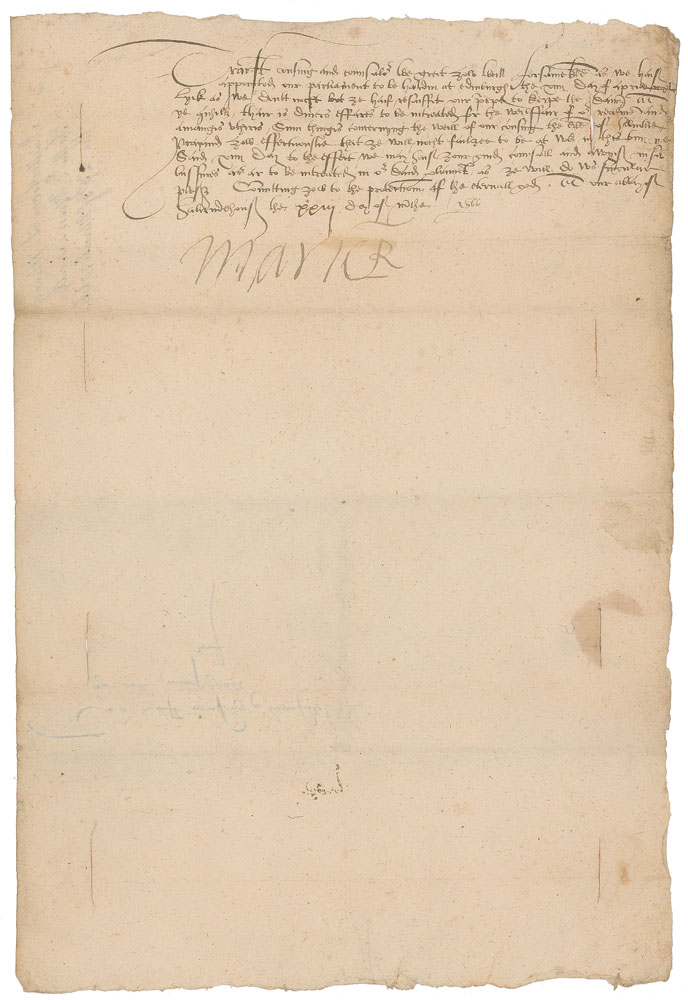 Exemplary LS in Scots, signed “Marie R,” one page, 8.25 x 12, “Holyrood” (“At our abbey of Halirudehous”), March 23, 1566/7, written to William Keith, the 3rd Earl Marischal. Queen Mary summons the Earl Marischal to a significant parliamentary event in Edinburgh on April 14, strongly urging his attendance. In part (translated): “There are various matters to be discussed touching the welfare of our realm and…issues relating to the prosperity of our cousin the Earl of Huntly” [in Scots: “Thair is divers effaces to be intreated for the welffair of or. realme and…thingis concernyng the weill of our cousing the erle of hwntlie”]. The Queen adds that his “good counsel and advice” [in Scots: “guid counsall and adwyis”] would be very beneficial. With address, later docket to reverse, and very slight traces of a red wax seal. Eight neat slits from the original string closure, with only one affecting two words and not the signature, otherwise fine condition. Document is housed in a beautiful hunter green cloth display folder emblazoned with "Mary Stuart, Queen of Scots" on the front in gold.

Third Earl Marischal William Keith, to whom this letter is written, was the Uncle of George Gordon, 5th Earl of Huntly and Lord Chancellor of Scotland. Huntly, a major conspirator of the time, had allied himself with the 4th Earl of Bothwell James Hepburn, Lord High Admiral of Scotland, and third husband-to-be of Mary, Queen of Scots. Huntly accompanied Bothwell and Mary to visit her second husband Lord Darnley, shortly before his February 10, 1567 death; Darnley’s residence was destroyed by an explosion and he was found murdered in the garden.

Bothwell was immediately accused of the crime and stood trial on April 12: having packed Edinburgh with armed supporters, he was soon acquitted. In the meantime, Huntly persuaded his sister, Lady Jean Gordon, to divorce Bothwell, leaving him free to wed Mary. As payment for his assistance, Huntly's family estates were to be restored and—as is foreshadowed in this letter—an Act of Parliament on April 19 delivered on that promise. Mary wed Bothwell on May 15, 1567, and with her reputation destroyed, she abdicated the throne on July 24, 1567. An exceptionally clean and attractive document of great rarity, boasting impressive historical content.