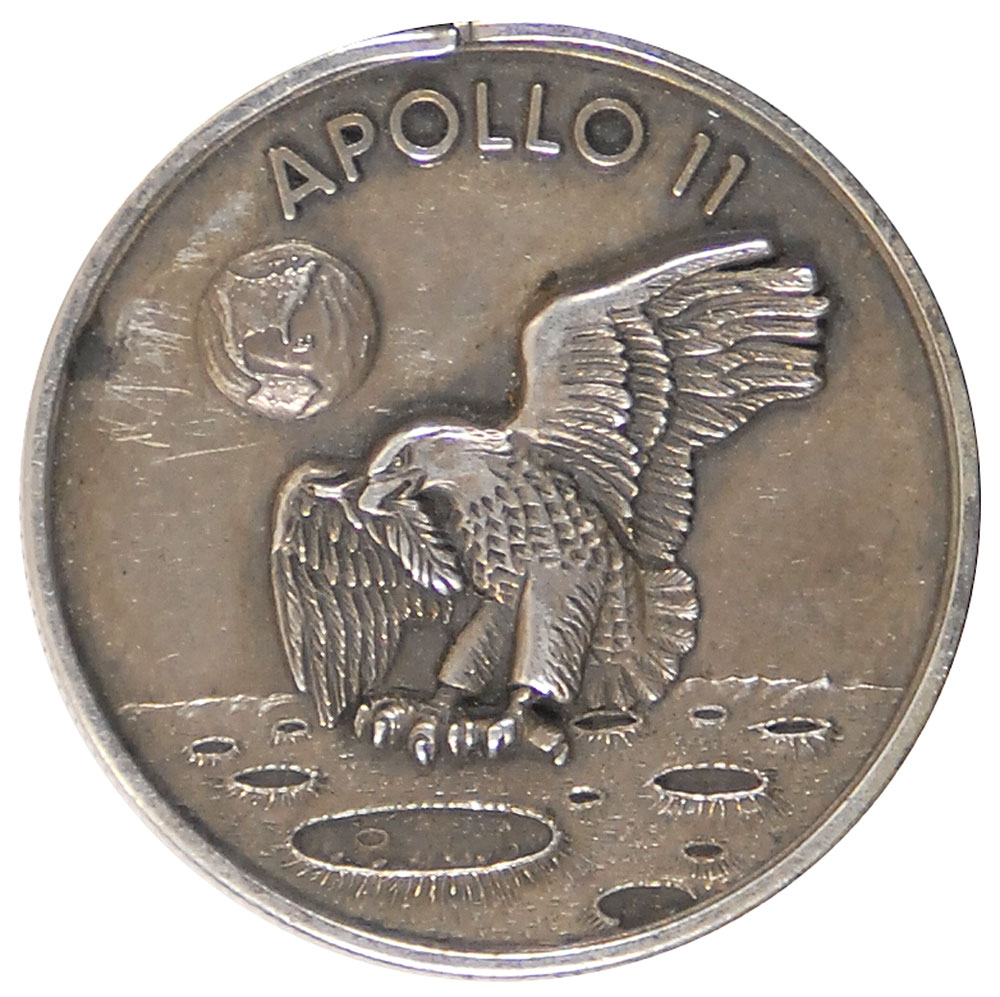 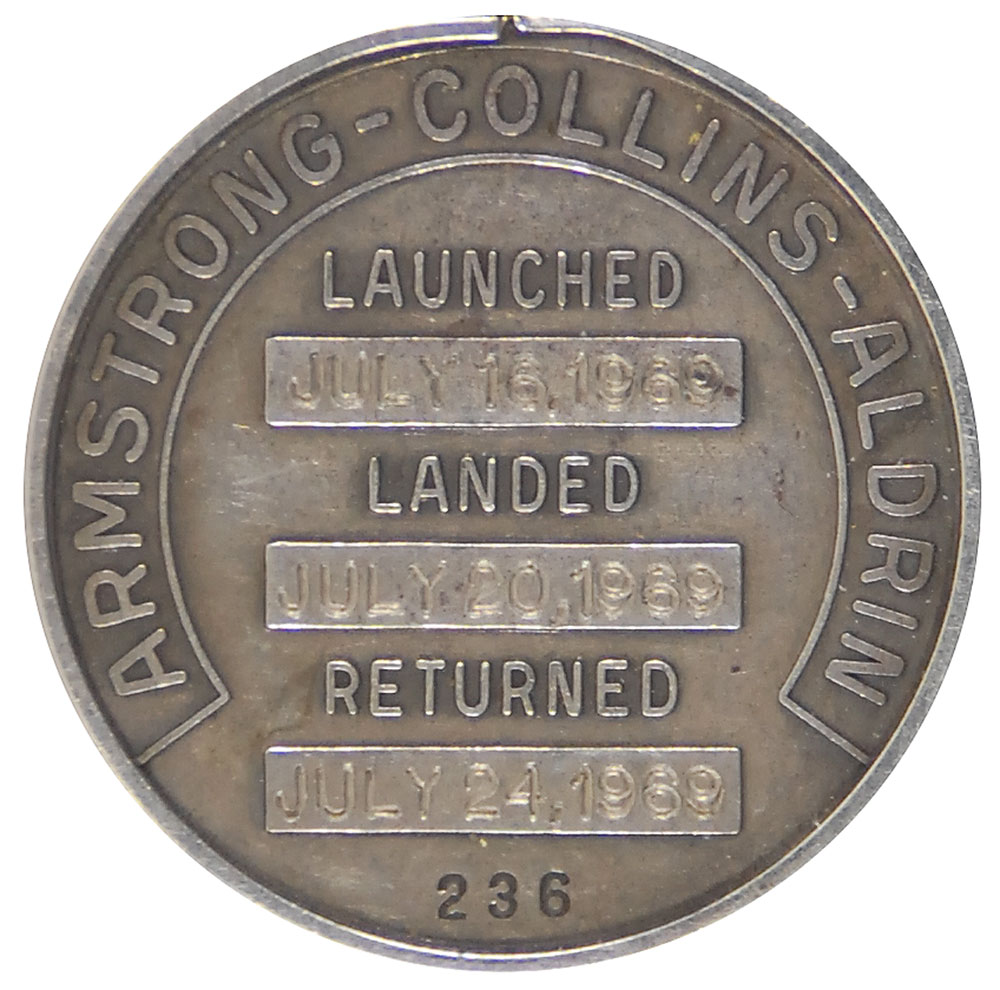 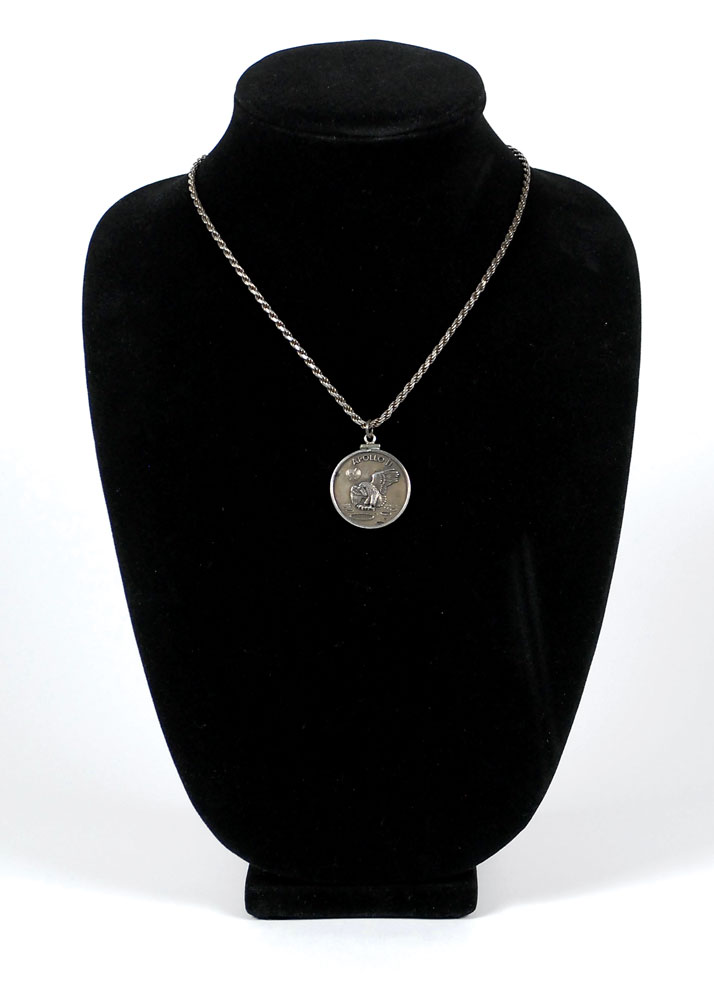 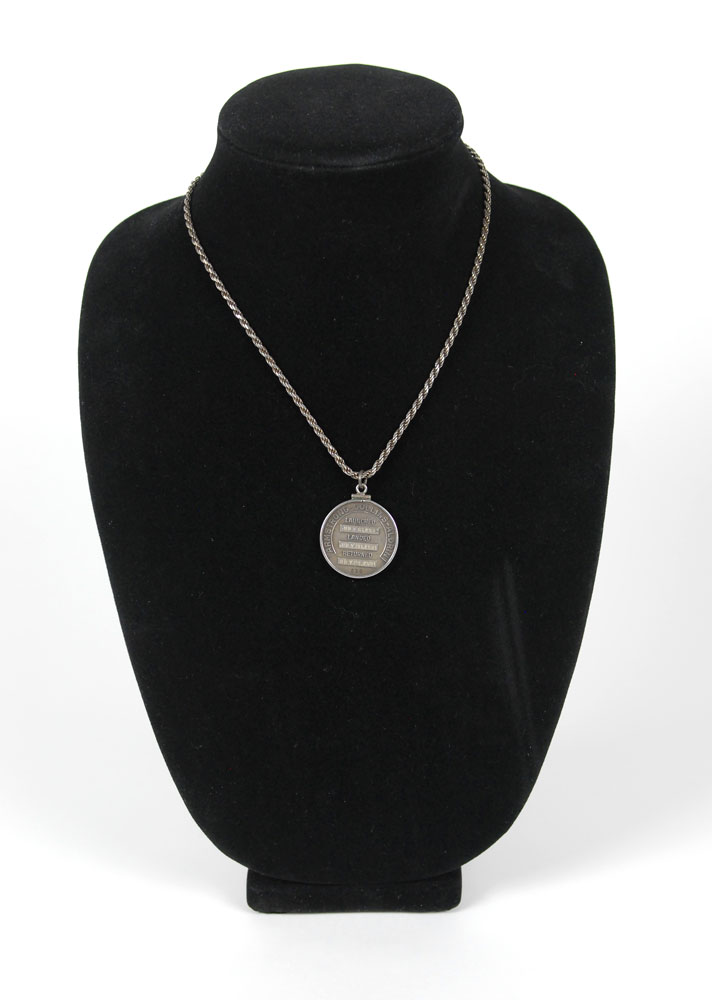 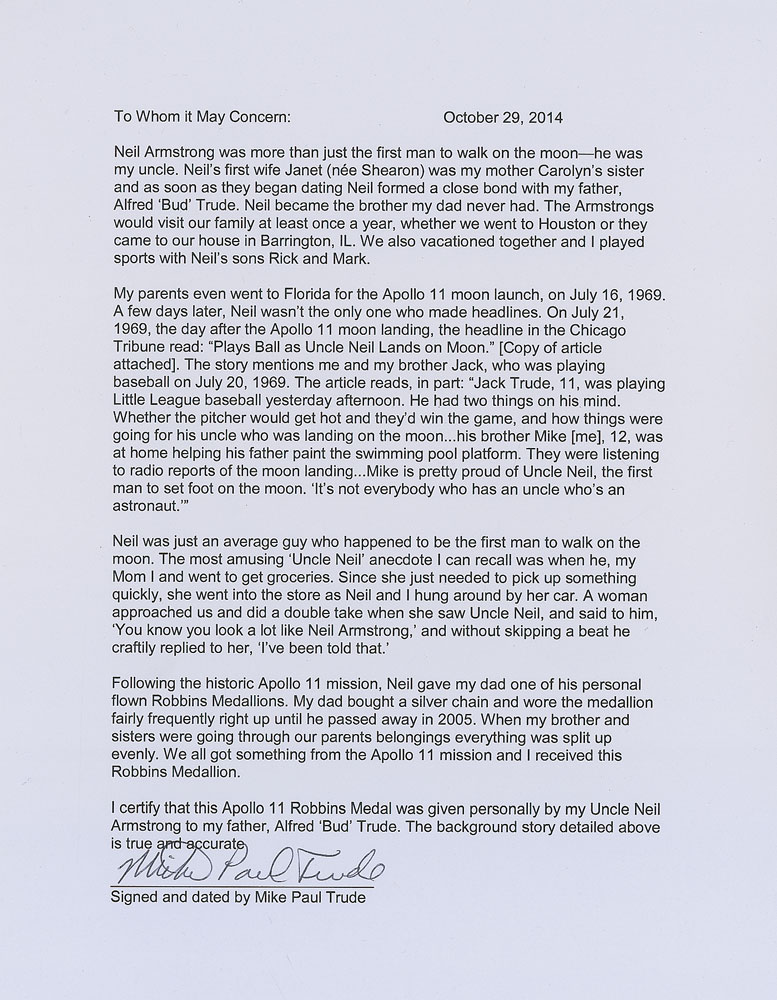 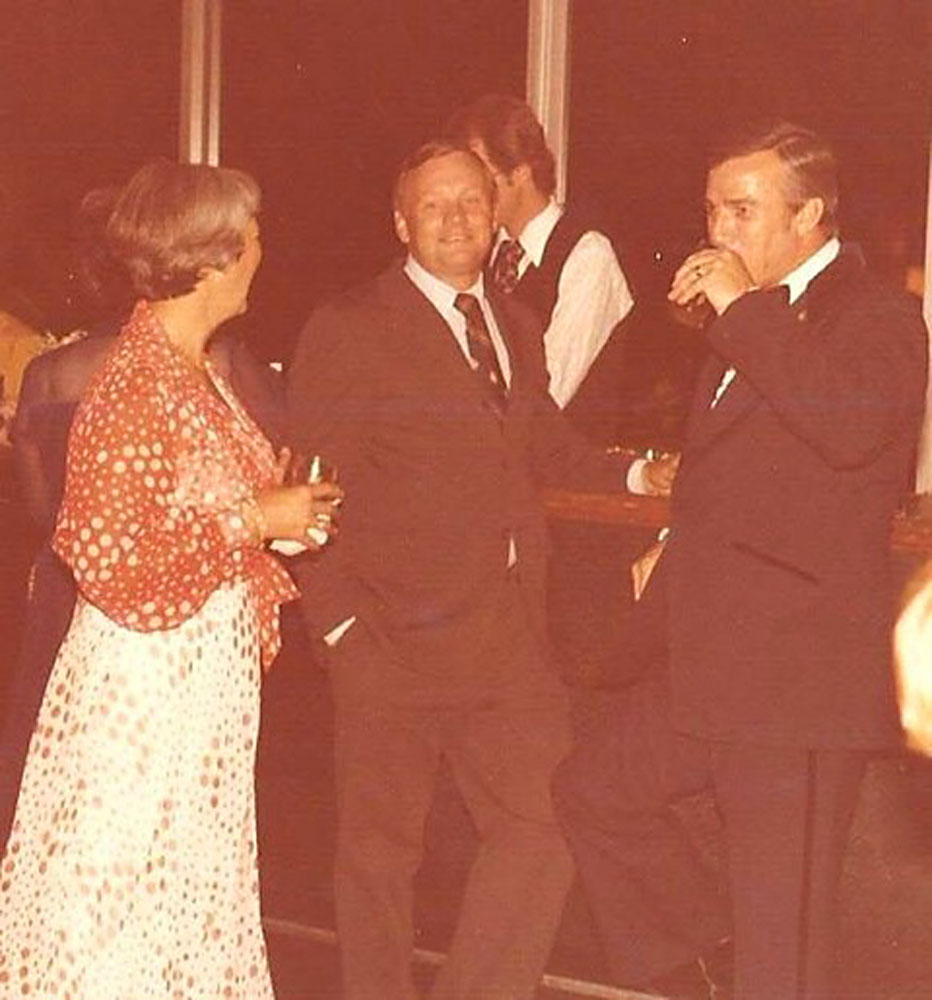 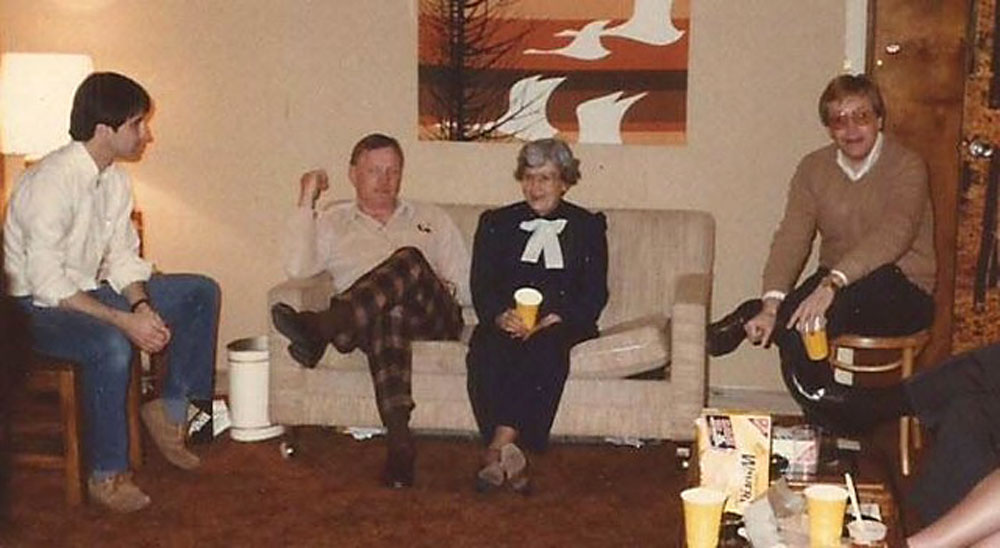 Unique and exceedingly desirable flown sterling silver Apollo 11 Robbins Medal originating directly from the family of Neil Armstrong, approximately 1.25″ diameter, with a raised eagle carrying an olive branch in its beak. The reverse of the medal features the last names of astronauts Neil Armstrong, Buzz Aldrin, and Michael Collins, and is engraved with the launch date of July 16, 1969, moon landing date of July 20, 1969, and return date of July 24, 1969. The medal is serial numbered “236.” Condition is mint state, with expected age wear. Presented on a ring suspended from a silver chain to be worn as a necklace. This is the only Robbins medallion personally owned by Armstrong to ever come to market; after returning from the moon Armstrong gave this as a gift to his brother-in-law, Alfred ‘Bud’ Trude, and it was subsequently left to his son and Armstrong’s nephew, Mike Paul Trude.

Accompanied by a letter of provenance from Mike Paul Trude, in part: “Neil Armstrong was more than just the first man to walk on the moon—he was my uncle. Neil’s first wife Janet (née Shearon) was my mother Carolyn’s sister and as soon as they began dating Neil formed a close bond with my father, Alfred ‘Bud’ Trude. Neil became the brother my dad never had. The Armstrongs would visit our family at least once a year, whether we went to Houston or they came to our house in Barrington, IL. We also vacationed together and I played sports with Neil’s sons Rick and Mark.

My parents even went to Florida for the Apollo 11 moon launch, on July 16, 1969. A few days later, Neil wasn’t the only one who made headlines. On July 21, 1969, the day after the Apollo 11 moon landing, the headline in the Chicago Tribune read: ‘Plays Ball as Uncle Neil Lands on Moon.’ The story mentions me and my brother Jack, who was playing baseball on July 20, 1969. The article reads, in part: ‘Jack Trude, 11, was playing Little League baseball yesterday afternoon…his brother Mike, 12, was at home helping his father paint the swimming pool platform. They were listening to radio reports of the moon landing…Mike is pretty proud of Uncle Neil, the first man to set foot on the moon. ‘It’s not everybody who has an uncle who’s an astronaut.’’

Neil was just an average guy who happened to be the first man to walk on the moon. The most amusing ‘Uncle Neil’ anecdote I can recall was when he, my Mom and I went to get groceries. Since she just needed to pick up something quickly, she went into the store as Neil and I hung around by her car. A woman approached us and did a double take when she saw Uncle Neil, and said to him, ‘You know you look a lot like Neil Armstrong,’ and without skipping a beat he craftily replied to her, ‘I’ve been told that.’

Following the historic Apollo 11 mission, Neil gave my dad one of his personal flown Robbins Medallions. My dad bought a silver chain and wore the medallion fairly frequently right up until he passed away in 2005. When my brother and sisters were going through our parent’s belongings everything was split up evenly. We all got something from the Apollo 11 mission and I received this Robbins Medallion.

I certify that this Apollo 11 Robbins Medal was given personally by my Uncle Neil Armstrong to my father, Alfred ‘Bud’ Trude. The background story detailed above is true and accurate.” Also accompanied by a copy of the newspaper article mentioned and copies of two family photos and another newspaper clipping. A scarce and immensely desirable Apollo 11 flown medallion in its own right, this is an absolutely astonishing artifact directly related to the first man on the moon and confirmed by industry experts as the first and only originating from Neil’s family to be made available for sale.