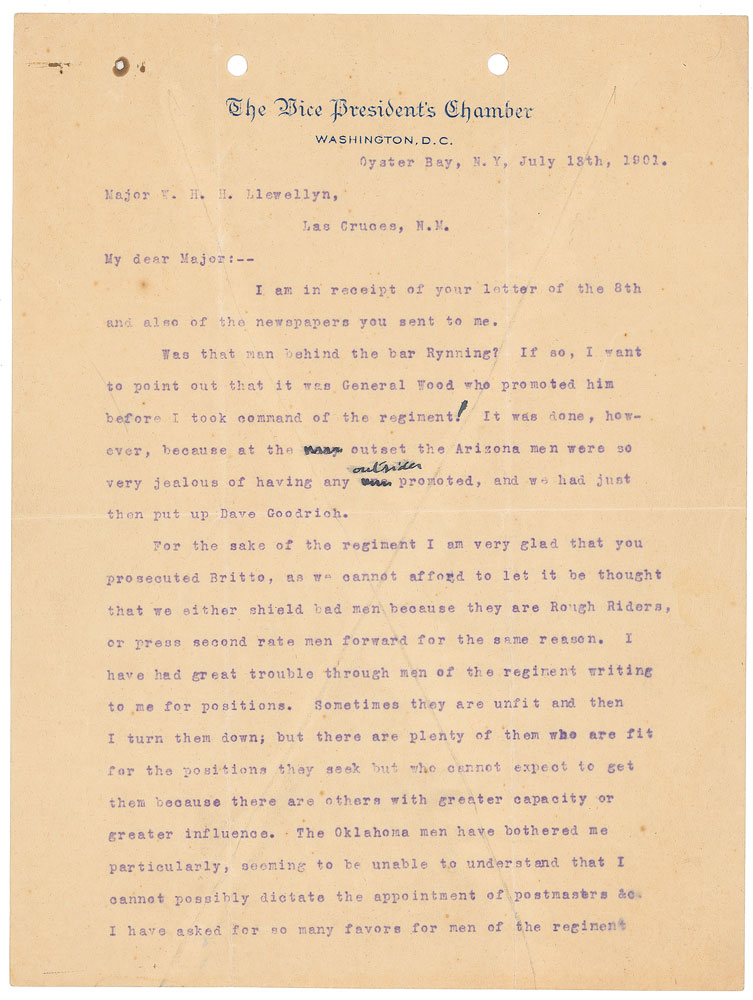 TLS as vice president, three pages, 8 x 10.5, The Vice President’s chamber letterhead, July 13, 1901. Letter to Major William H. H. Llewellyn, who served under Roosevelt in the Rough Riders during the Spanish-American War. In part: “For the sake of the regiment I am very glad that you prosecuted Britto [sic], as we cannot afford to let it be thought that we either shield bad men because they are Rough Riders or press second rate men forward for the same reason. I have had great trouble through men of the regiment writing to me for positions. Sometimes they are unfit and then I turn them down; but there are plenty of them who are fit for the positions they seek but who cannot expect to get them because there are others with greater capacity or greater influence. The Oklahoma men have bothered me particularly, seeming to be unable to understand that I cannot possibly dictate the appointment of postmasters &c. I have asked for so many favors for men of the regiment that I am positively ashamed to go to a single department in Washington, and above all, to the War Department. Yet each trooper not unnaturally when he writes me thinks his own is the only case, and that if I chose to, I can surely do anything he wants.

I am much put out at the reunion being put off until August 2nd, the date when I go to Colorado Springs to speak at the quarter centennial celebration of statehood. This was done against my earnest protest. The impression cannot help being created that the reunion was deferred purely to suit my convenience. I earnestly desire you to come to the reunion, for I want you to help me to see to it that these annual reunions are stopped, and that we do not have another reunion until say 1905. The regiment has such a splendid record that it will be criminal to hurt it, and yet this is exactly what will be done if we permit it to be used as an advertising scheme…Moreover, when we have a big reunion extensively advertised in some State which had regiments of its own in the war, we inevitably provoke sullen discontent among the members of these regiments, and give the impression that we meet in a spirit of boastfulness and with an improper desire to exploit our own deeds…

When we have a reunion it would be much better to have it always in one of the four territories in which the regiment was enlisted (or else in San Antonio) and to have it simply and solely a quiet meeting of the regiment without any outside show of a spectacular type. Moreover, this type of reunion should never be held more than say once in four years, as it is out of the question to expect the best and most hardworking members of the regiment—the ones of whom we are the proudest—to come even every two years.” Intersecting folds and scattered creases (some passing through signature, light overall toning, and rusty staple holes to the top, otherwise fine condition.

Rife with excellent content, this letter demonstrates Roosevelt's close affinity for his legendary force of 'Rough Riders'—even later, after two terms as President, he still preferred to be called ‘Colonel Roosevelt,’ and considered the charge on San Juan Hill as ‘the great day of my life.’ As requested, the 1905 reunion was indeed held in San Antonio and Roosevelt—now president—attended. Despite his pride in the group, he was keenly aware of public perception and feared sullying its legacy—and his own—by showing any blatant favoritism toward his men. Roosevelt relied on Llewellyn, who had been rewarded for his valor with a post as US attorney in New Mexico, to keep him up to date on veterans of the Rough Riders. Here, Roosevelt references Frank Brito, a former Rough Rider who had been convicted of murder in the third degree for killing his sister-in-law—although, in fact, he intended to shoot his wife. In addition to office-seekers, Roosevelt was plagued by those who were in precarious positions; in his autobiography, he described the minority of the Rough Riders ‘who in certain ways were unsuited for a life of peaceful regularity…It was from these men that letters came with a stereotyped opening which always caused my heart to sink—‘Dear Colonel: I write you because I am in trouble.’’ All together, this is a fabulous letter that offers an insider's perspective of Roosevelt's postwar experiences with the Rough Riders, extolling both the flaws and virtues of leading such a storied group of soldiers. Pre-certified John Reznikoff/PSA/DNA and RR Auction COA.