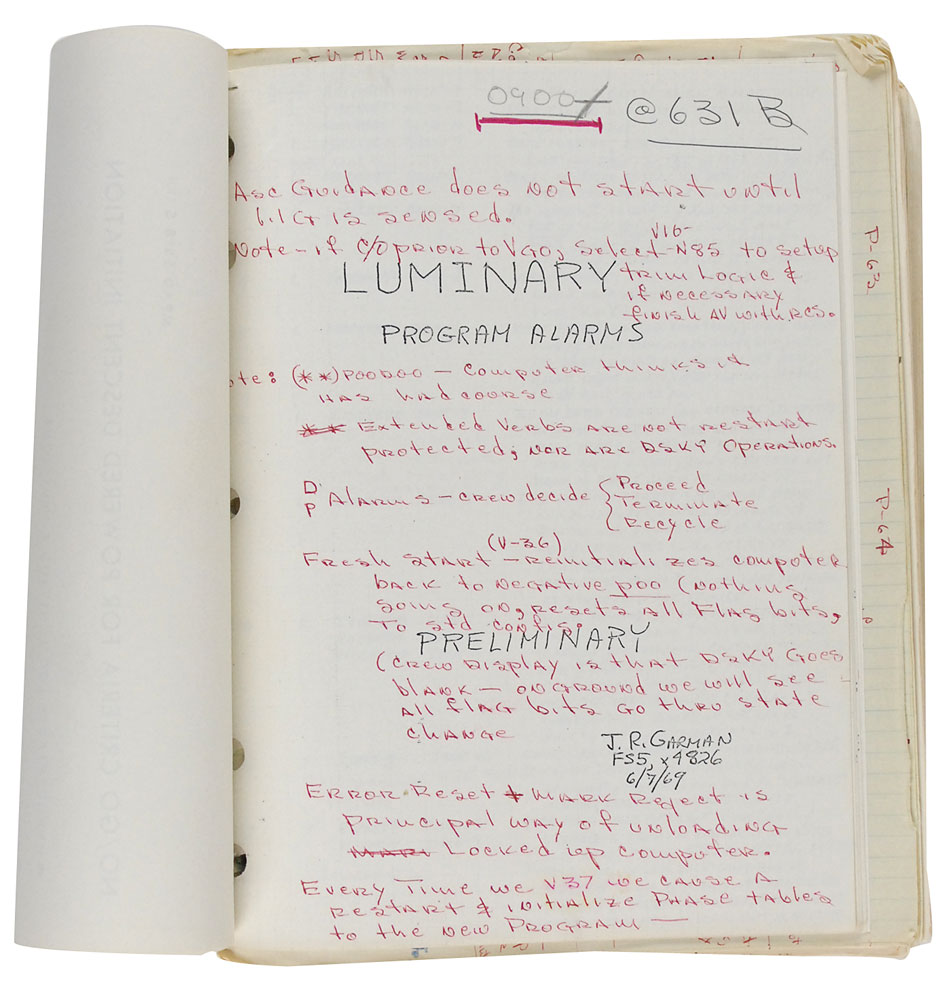 Extremely important Apollo 11 console-used manuals, graphs, and procedures utilized by Flight Director Gene Kranz while at his console in Mission Control throughout the landmark mission, as (according to Kranz), “a primary resource for coordinating that mission and associated activities both during the flight or while Armstrong and Aldrin were on the lunar surface.” First is a 3.25″ thick three-ring binder with an LM-5 decal affixed to the front cover and a label along the binding which reads, “Flight Book, Apollo 11. G. F. Kranz.” Manual is separated by 16 labeled tabs for various portions of the mission or spacecraft. Included in the manual are copies of various memos, charts, graphs, and other related material, many notated by Kranz. Included in the binder are: complete Apollo Mission Techniques Mission G Lunar Descent techniques description manual; LM Undocking Procedures; a copy of a memo sent on June 6, 1969, by Kranz to 11 recipients, including Neil Armstrong and Charlie Duke, notated by Kranz; a copy of the revised Apollo 11 mission control shift schedule; charts of Go-No Go criteria for the Command and Lunar Modules; and various charts and graphs relating to abort data. Of particular interest is a handwritten “Abort Checklist,” listing six steps, which include: “4. CSM Rescue Status & Advisory 5. Abort Problem—Further effect.” Lower portion is headed, “Cutoff,” listing six steps which include: “1. Safe Orbit…3. Rdz Duration—3 1/2 / 5 1/2 / other 4. Status check-all 5. Consummables vs Rdz Duration.” Also included in the binder is an incredibly detailed flow chart titled, “Abort Sequence Logic,” hand-drawn in pencil by Kranz.

Second binder is a brad-bound collection of various NASA memos and manuals including: Ground Monitoring of Guidance Velocity Residuals During Powered Descent, Manual Ascent Techniques Description, Lunar Orbit Activities Techniques Description, LM Descent/Ascent Summary Document, and Operational LM Abort and CSM Rescue Plan for Apollo 11. Integrated into the manuals are other memos and reports, including a heavily notated report on Luminary Program Alarms. Also contained in the second volume are several handwritten pages by Kranz, one dealing with abort contingency plans and options, including “DSKY lockup,” and three pages of notes headed at the top, “Comments on Descent 7/1/69,” with some of Kranz’s notes reading: “What are crew onboard rules for aborting—i.e.we say we handle slowdrift cases & infer both we & crew handle it,” “Should we dry run the sun check prior to DOI activation,” “Crew will sense—attitude changes—visual descent rate.” In overall fine condition, with expected handling wear.

Accompanied by a letter of provenance from Kranz, which reads, in part: “The Apollo 11 Flight Book with mission materials…come from my personal space archives. Contained within is a compilation of information for my personal use as Flight Director. The material included reflected what I determined most useful to have at my fingertips in order to efficiently and successfully manage those aspects of Apollo 11 that I was responsible for. Each Flight Director’s Flight Book included material mirroring individual needs, as we each had our own diverse backgrounds and knowledge base….For my ease of use, this binder has been organized and tabbed, was carried everywhere and kept on top of my console during the actual mission.” Entrusted with the responsibility of Flight Director of the first manned lunar landing, these manuals are were crucial to the success of the mission, as Kranz prepared for any scenario possible through every stage of the voyage. An offering of historic proportion, these papers were kept close to Kranz throughout the entire mission. Pre-certified Steve Zarelli and RR Auction COA.