Von Braun’s calculations for an ambitious mission to Mars 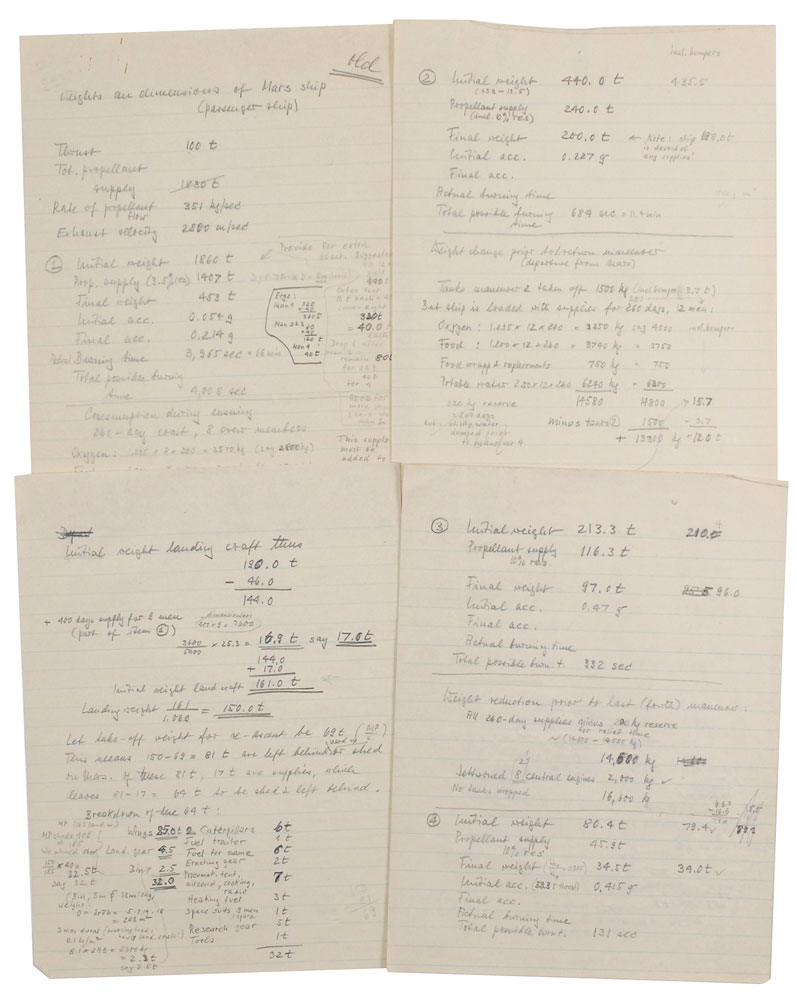 Von Braun’s calculations for an ambitious mission to Mars

Von Braun’s handwritten notes in pencil on the requirements for a spacecraft destined for Mars, unsigned, seven lined pages (all but one single-sided), each 8 x 10.5, no date. von Braun titles the first page “Weights an[d] dimensions of Mars ship (passenger ship),” then lists the specifications of provisions crucial to such a mission, beginning with fuel requirements: “Tot. propellant supply 1830t; Rate of propellant flow 351 kg/sec; Exhaust velocity 2800 m/sec…Initial weight 1860t…Actual Burning Time 3,965 sec=66 min; Total possible burning time 4,008 sec.” He goes on to list necessary supplies under the heading “Consumption during ensuing 260-day coast, 8 crew members,” including: “Oxygen=1.235 x 8 x 260 = 2570 kg…Food: 1.200 x 8 x 260 = 2500 kg…Potable water = 2.00 x 8 x 260 = 4160 kg.” Similar notes on supplies follow this section and estimate the weight of supplies as they become depleted, with sections entitled “Weight changes prior to 1. return maneuver (departure from Mars),” “Weight reduction prior to last (fourth) maneuver,” and “Bill of weights after maneuver 4,” which estimates the combined total of all portions of the spacecraft, including: “Crew nacelle,” “Ship structure,” “Navig. equipment, astrodome etc.,” “Instrumentation,” “4 hinged engines,” “12 crew members,” and “Loot from Mars.” The last list is headed “Weight breakdown of cargo ship,” which estimates the “Weight of landing craft incl. all ‘interplanetary cargo’” at 190 tons. The final page calculates the total weight of the craft when departing from Mars: “Let take-off weight for re-ascent be 69t…This means 150 - 69 = 81t are left behind used up or shed on Mars. Of these 81t, 17t are supplies, which leaves 81 - 17 = 64t to be shed & left behind.” In fine condition, with scattered creases and paperclip marks to the upper left.

Von Braun was fascinated by the idea of a manned mission to Mars and made the first engineering analysis of a such an excursion in 1948, first publishing his findings in 1952. The calculations offered here generally correspond with what became his extremely ambitious proposal, inspired by the the Antarctic expeditions of the early 20th century. He envisioned a 70-member crew aboard a fleet of ten spacecraft, comprised of seven ‘passenger’ ships and three ‘cargo’ ships. The cargo ships would orbit the planet and dispatch groups of explorers to the Martian surface on the smaller passenger vessels. As described in these notes, in the launch toward Mars the ships would fire their engines for 66 minutes, using more than three-quarters of the propellant on board, and enter a coast for 260 days until arriving at their destination. They would then spend 443 days exploring Mars before returning to Earth, another 260-day voyage. An extreme rarity, these calculations provide tremendous insight into von Braun’s planning stages for a mission to the ‘red planet,’ and are of great historical significance. Pre-certified Steve Zarelli and RR Auction COA.