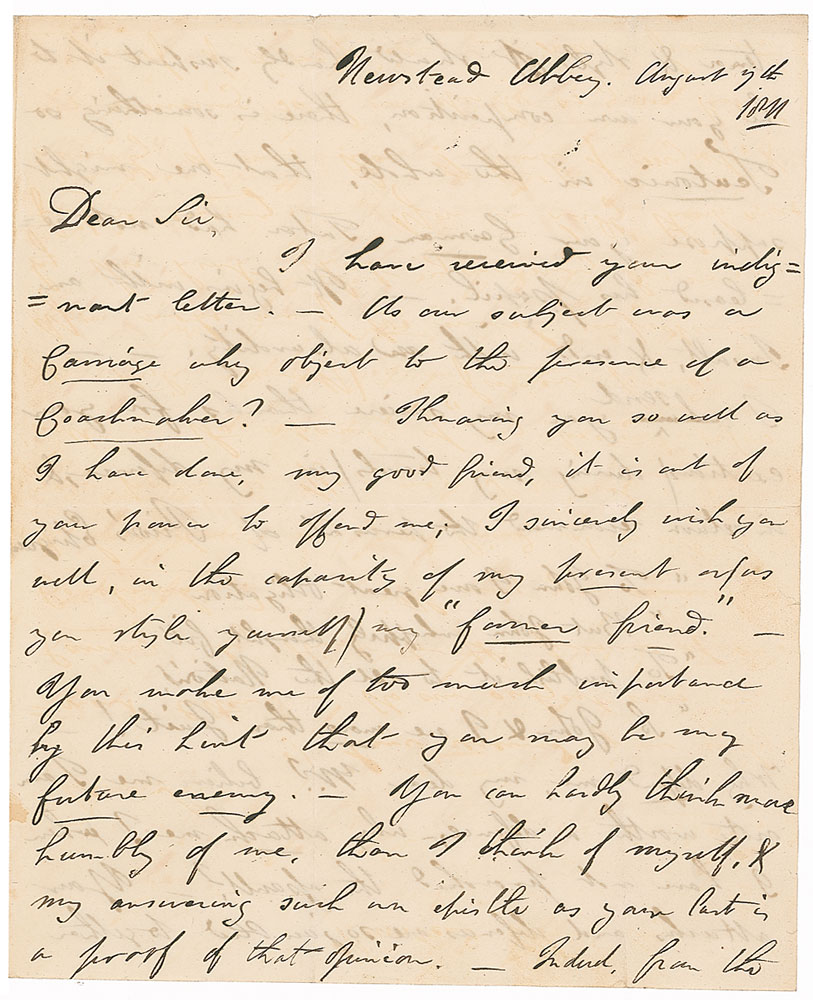 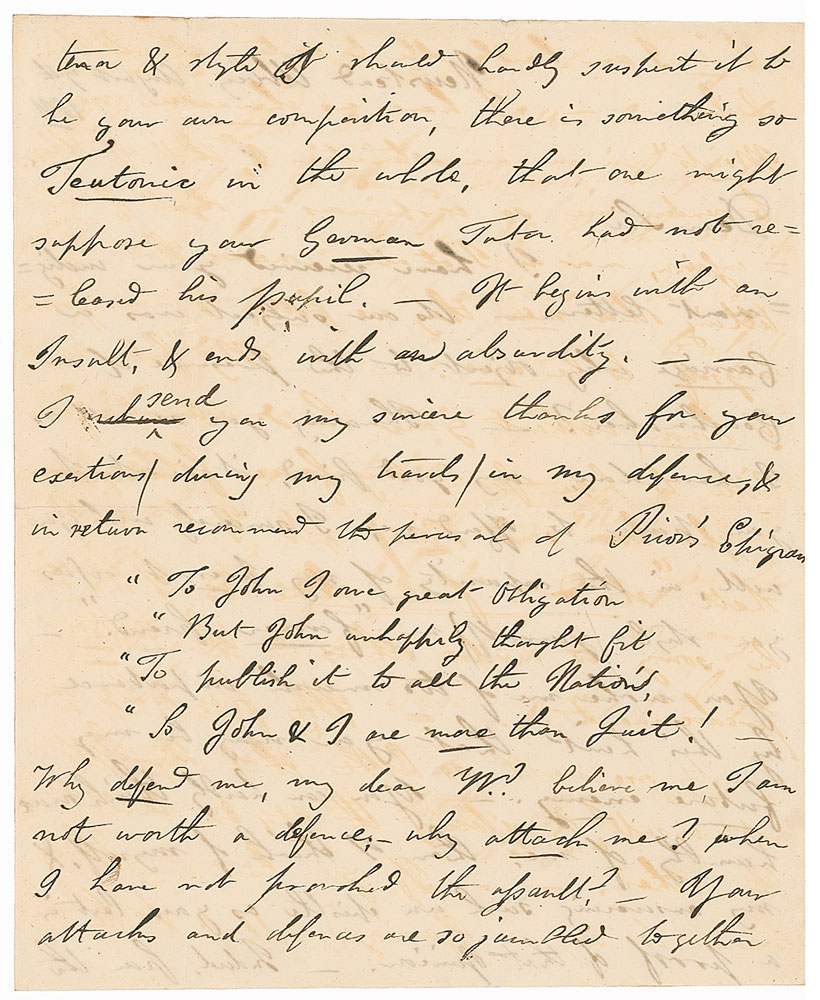 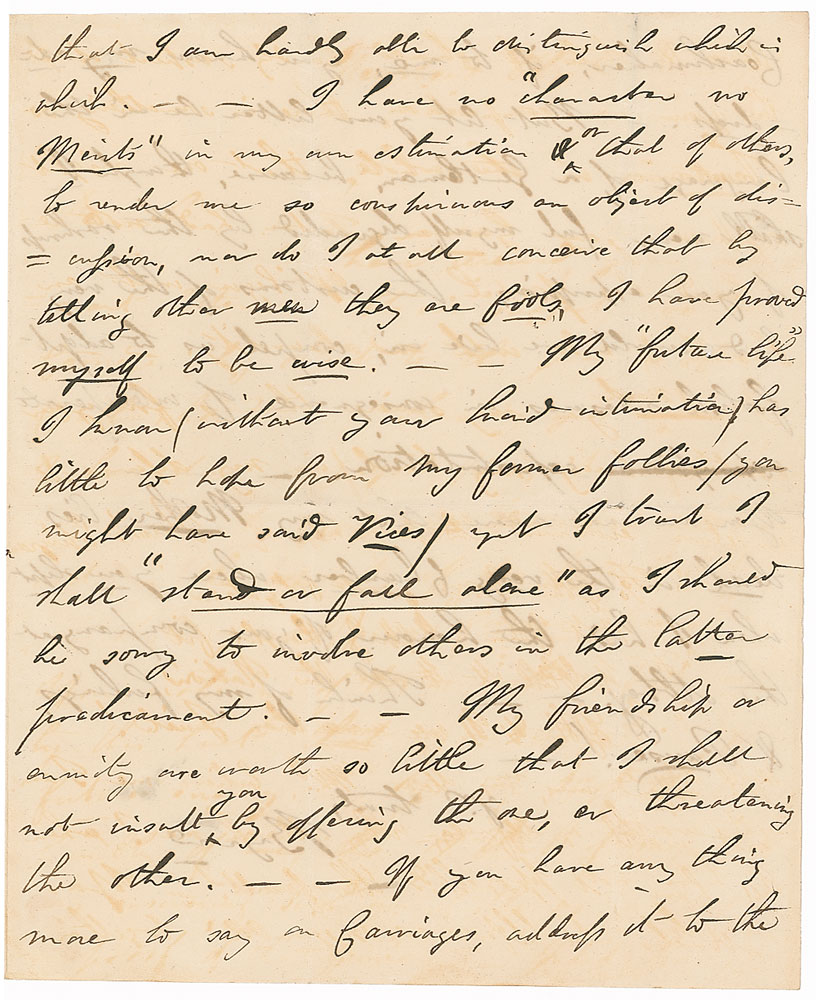 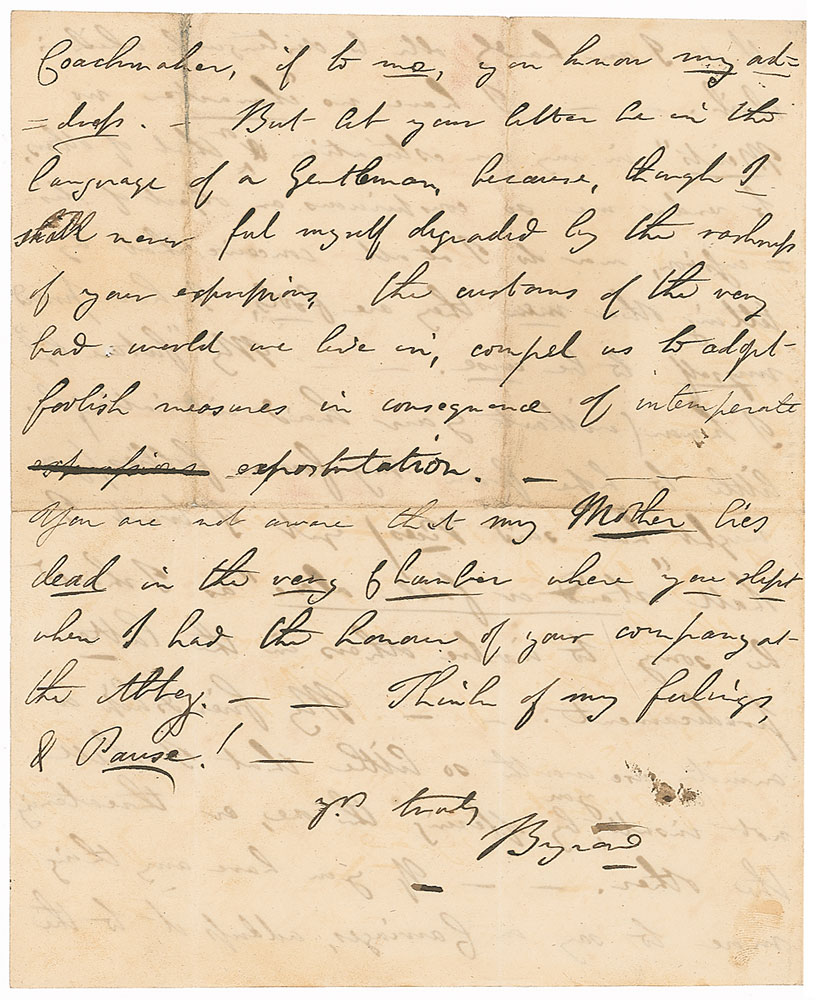 ALS signed “Byron,” four pages on two adjoining sheets, 7.25 x 9, August 7, 1811. Extensive, unpublished letter to his friend James Wedderburn Webster. In part: “I have received your indignant letter. As our subject was a Carriage why object to the presence of a Coachmaker? Knowing you so well as I have done, my good friend, it is out of your power to offend me; I sincerely wish you well, in the capacity of my present or (as you style yourself) my 'former friend.’ You make me of too much importance by this hint that you may be my future enemy…Why defend me, my dear W.? Believe me, I am not worth a defence;—why attack me? when I have not provoked the assault? Your attacks and defenses are so jumbled together that I am hardly able to distinguish which is which…If you have any thing more to say on Carriages, address it to the Coachmaker, if to me, you know my address. But let your letter be in the language of a Gentleman, because, though I shall never feel myself degraded by the rashness of your expressions, the customs of the very bad world we live in, compel us to adopt foolish measures in consequence of intemperate expostulation.—You are not aware that my Mother lies dead in the very Chamber where you slept when I had the honour of your company at the Abbey. Think of my feelings, & Pause!” In fine condition, with unobtrusive intersecting folds and show-through from writing to opposing sides.

Upon his return to London from his Grand Tour of the Mediterranean in mid-July of 1811, 23-year-old Byron had ordered a vis-à-vis carriage to be built by the coachmaker Goodall, which he then exchanged for a carriage belonging to James Webster, a longtime friend from his days at Cambridge. Strongly dissatisfied with the tattered lining of the vis-à-vis, Webster resold it to Byron and unleashed a series of angry and insulting remarks. Written just six days after his mother’s death, Byron sent this passionate reply, rife with the dramatic language for which he is remembered, calling into question the state of their friendship and attempting to reconcile. Unpublished in any collection of Byron’s correspondence, this is a highly desirable and emotional letter from the master Romantic. Pre-certified John Reznikoff/PSA/DNA and RR Auction COA.