Writing to Elijah Muhammad: “I think the only way we can really make any progress out here is to work TOGETHER, and for each other” 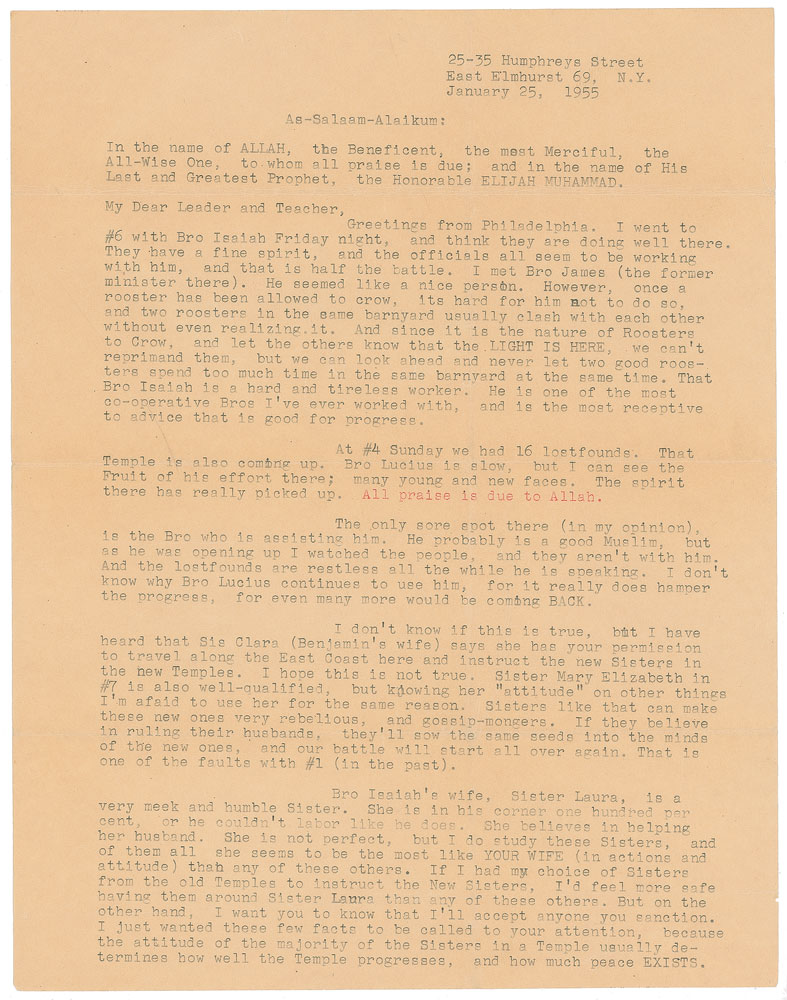 Writing to Elijah Muhammad: “I think the only way we can really make any progress out here is to work TOGETHER, and for each other”

TLS, two pages, 8.5 x 11, January 25, 1955. Fascinating letter to his famous teacher, Elijah Muhammad, discussing the progress of spreading their beliefs. In part: “As—Salaam—Alaikum: In the name of ALLAH, the Beneficent, the most Merciful, the All-Wise One, to whom all praise is due: and in the name of His Last and Greatest Prophet, the Honorable ELIJAH MUHAMMAD…I went to #6 with Bro Isaiah Friday night, and think they are doing well there. They have a fine spirit, and the officials all seem to be working with him, and that is half the battle. I met Bro James (the former minister there). He seemed like a nice person. However, once a rooster has been allowed to crow, its hard for him not to do so, and two roosters in the same barnyard usually clash with each other without even realizing it. And since it is the nature of Roosters to Crow, and let the others know that the LIGHT IS HERE, we can’t reprimand them, but we can look ahead and never let two good roosters spend too much time in the same barnyard at the same time. That Bro Isaiah is a hard and tireless worker. He is one of the most co-operative Bros I’ve ever worked with, and is the most receptive to advice that is good for progress.

At #4 Sunday we had 16 lostfounds. That Temple is also coming up. Bro Lucius is slow, but I can see the Fruit of his effort there; many young and new faces. The spirit there has really picked up. All praise is due to Allah…

I don’t know if this is true, but I have heard that Sis Clara (Benjamin’s wife) says she has your permission to travel along the East Coast here and instruct the new Sisters in the Temples. I hope this is not true. Sister Mary Elizabeth in #7 is also well-qualified, but knowing her ‘attitude’ on other things I’m afraid to use her for the same reason. Sisters like that can make these new ones very rebellious, and gossip-mongers. If they believe in ruling their husbands, they’ll sow the same seeds into the minds of the new ones, and our battle will start all over again. That is one of the faults with #1 (in the past).

Bro Isaiah’s wife, Sister Laura, is a very meek and humble Sister…If I had my choice of Sisters from the old Temples to instruct the New Sisters, I’d feel more safe having them around Sister Laura than any of these others. But on the other hand, I want you to know that I’ll accept anyone you sanction. I just wanted these few facts to be called to your attention, because the attitude of the majority of the Sisters in a Temple usually determines how well the Temple progresses, and how much peace EXISTS.

Everything at #12 seems to be going fairly well…Bro Lucius had 29 lostfounds at #7 Sunday, and I think he continued on up to #13 and #11. I advertised his coming for two weeks so he should have good attendance in both places. Nothing beats correct ADVERTISEMENT. No one at #4 knew I was coming until I got there.

Then I had to start cracking my own whip to make sure I’d have some lostfounds, and thanks to ALLAH, there were some. But I do believe Bro Lucius could have been more cooperative. I had to talk two hours with him to get him to go to Newark, Springfield and Boston, after having the things all set up for him, and that is not good. I’m going to write him a letter and tell him about this, because I think the only way we can really make any progress out here is to work TOGETHER, and for each other. Also, if I thought a person wasn’t working with me to the best of his ability, and I didn’t mention it, he’d never have a chance to justify himself. So I believe in putting things like this on the table, then If I’m wrong, the person can rectify the thing.

The second Sunday (or the first Sunday, rather) in February I’m going to trade with Isaiah at #6. I want to see if I can get his flock to make it possible for him to stop working for the devil, for if that Bro can accomplish as much as he does for the nation while slaving for the devil, think what he could do were he free to devote all his time to the nation.” Intersecting folds passing through the signature, otherwise fine condition. Accompanied by the original mailing envelope.

This letter comes just three years after Malcolm X became a devout follower of Elijah Muhammad. During this time, Malcolm X was able to spread the word and more than quadrupled the amount of followers. Here, he is informing his leader of the progress of all the temples he began or oversaw, which were numbered rather than named. Malcolm X’s demise would be a falling out with Muhammad when the former questioned his integrity and devotion after rumors swirled to Muhammad’s infidelity, a direct conflict with the teachings. Letters by Malcolm X are extremely rare, with this example being especially long and rife with excellent content—not to mention its important recipient, Elijah Muhammad, the figurehead of the Nation of Islam movement. Pre-certified John Reznikoff/PSA/DNA and RR Auction COA.