John tells Crawdaddy editor, “I've been busy with the baby, try me later in the year” 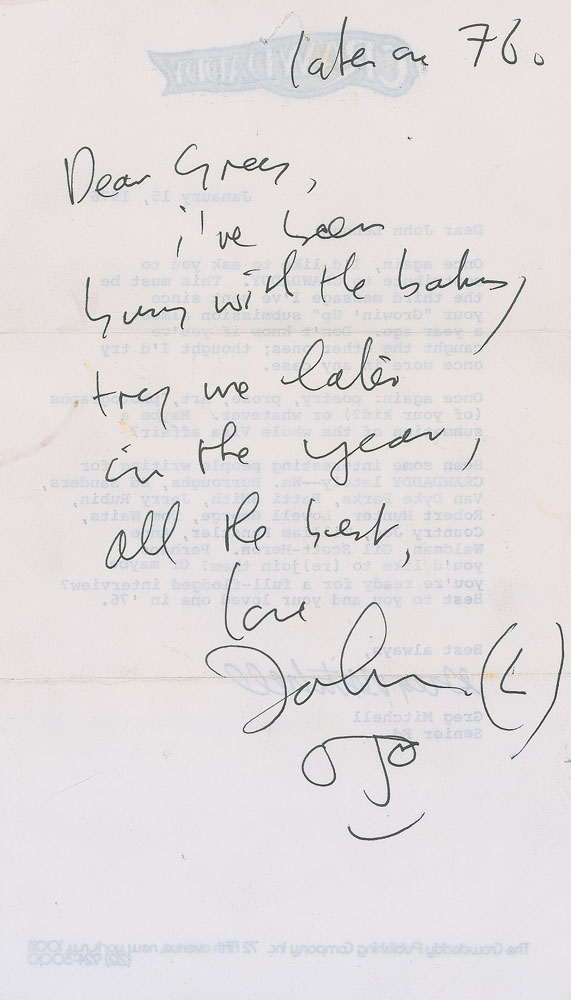 John tells Crawdaddy editor, “I've been busy with the baby, try me later in the year”

ALS signed “John (L),” one page, 5.75 x 10, 1976. Letter to the editor of Crawdaddy magazine, quickly written on the reverse of a January 15, 1976, letter to Lennon from senior editor Greg Mitchell, asking Lennon to contribute, “poetry, prose, art, photographs (of your kid?) or whatever. Maybe a summation of the whole Visa affair?” On the reverse Lennon writes, “I've been busy with the baby, try me later in the year, all the best.” Underneath his signature, Lennon adds his instantly-recognizable self-portrait caricature. In fine condition, with a horizontal fold passing through signature, and a small staple hole to top edge. Accompanied by the original mailing envelope, with the Apple return addressed crossed out, and bearing a stamped Lennon Music address underneath. Also accompanied by a June 1975 issue of Crawdaddy, featuring an earlier Lennon photo contribution from Lennon and a certificate of authenticity from Beatles expert Frank Caiazzo.

Lennon had been fighting deportation for several years at the time of Mitchell’s request, in part due to his strong anti-Vietnam songs and views. Spearheaded by Richard Nixon and Strom Thurmond, deportation hearings began in 1972 and lasted until October of 1975, when a court of appeals blocked the attempt, with the order eventually overturned for good in 1975, after Gerald Ford took office, with Lennon receiving his ‘green card’ the following year. At the time of this letter, Lennon was deeply involved in his role as house husband, following the birth of his son Sean, which would put his musical career on hold for the next five years. Pre-certified Roger Epperson/REAL and RR Auction COA.