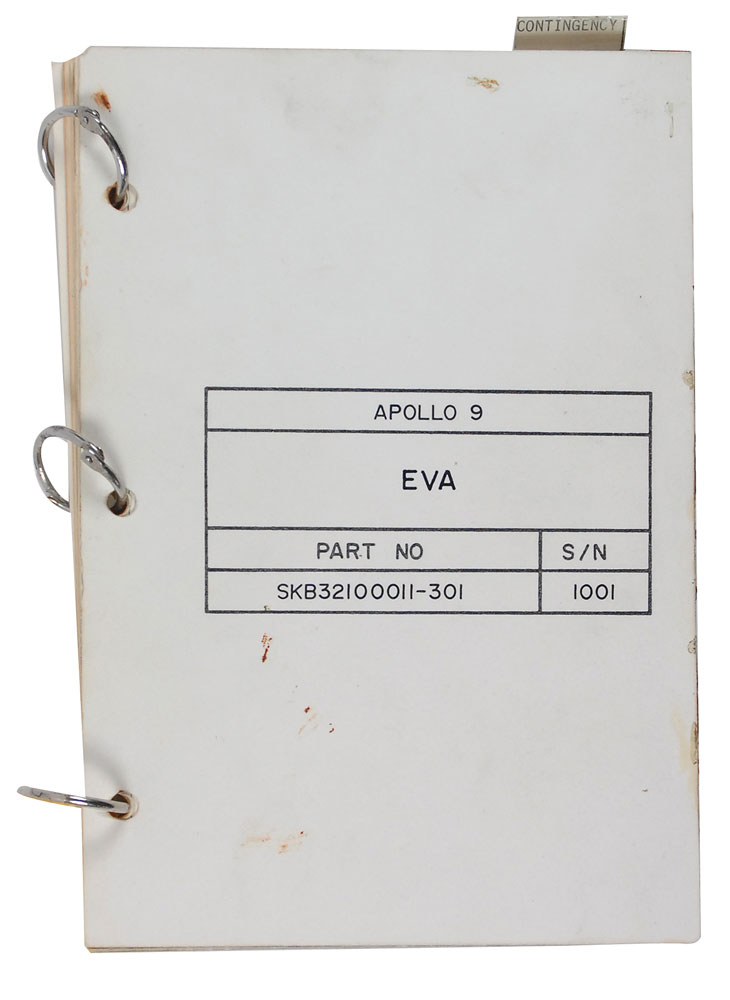 Extremely rare Apollo 9 EVA checklist, flown on board the Lunar Module ‘Spider,’ measuring 6 x 8 and consisting of 24 (12 double-sided) heavy, cardboard stock pages and bound by its original three rings in the left edge. Printed on the front cover is “APOLLO 9 EVA PART NO SKB32l000l l-301 S/N 1001.” A unique extra 4″ diameter ring is on the bottom of the back cover, to hook it onto the main control panel. Also, unlike the other checklists on this flight, each page has a Velcro tab and the cover has a Velcro strip to prevent them from floating away during the EVA.

This rare complete checklist, heavily notated by Dave Scott, covers the preparation for the stand up EVA performed by CMP Dave Scott, as well as LMP Rusty Schweickart’s preparation of the Portable Life Support System (PLSS); the steps scheduled for his space walk, and the depressurization and pressurization of the Command Module Gumdrop. There are dozens of checkmarks thoughout the checklist which includes the procedures for the unstowing of EVA utility and camera equipment; crew transfer from CM to LM; Command Module Preparation; Crew Status; PLSS Comm Check (EVA COMM CONFIG); System Prep for Depress; ECS Redundant Component Check; Final Prep for Depress; Suit Test; Hatch Opening; Hatch Closing; Cabin Repress; Post EVA Systems Configuration; Post EVA Cabin Configuration; and the actual original procedures the EVAs of both the CMP and LMP. Schweickart was originally scheduled to make an EVA transfer on the outside of the Lunar Module over to the Command Module and transfer back to the Lunar Module (in the event of a future emergency rescue). However, due to his bout of space sickness the day before—the procedures outlined were scrubbed and Rusty stepped outside of the Lunar Module Spider and stood on the LM porch inserting his feet into the ‘Golden Slippers’ which are indicated in this checklist. Dave Scott would do a stand up EVA in the CM hatch and grab the experiments Rusty would otherwise have retrieved. The procedures herein reflect the original 2 hours and 25 minutes of activity originally planned for two sunrises and two sunsets. The checklist also has a tabbed Contingency section, in the event of other critical needs, to closing the hatch and cabin depress and repress.

The checklist itself is signed and flight certified in green felt tip on the back cover by Mission Commander Jim McDivitt, “Flown on Apollo 9 Jim McDivitt A-9 CDR—Notes and checkmarks made by Dave Scott aboard Apollo 9,” and signed on the inside back cover in black felt tip, “Dave Scott Apollo 9 CMP.” The checklist itself is notationally dense, filled with checkmarks, and in-flight commentary. On page 15, under the heading, “EVA Debriefing,” the instruction reads “Log or voice record comments on hardsuit operation.” Under the instruction Scott writes, “Warm after about 5 min, never hot. Out ˜ 35 min of 50 min pass. Left hand only slightly warmer than right. Hatch open ˜ 30# close ˜ 40#. Held with about 40# for dogs to engage—not hot to left hand.” Attached to the bottom ring is original Temporary Parts Removal Tag (Form 961-D) from North American Aviation, which is rarely seen on complete checklists and an important part of this rare artifact’s chain of custody. In fine condition. Accompanied by a signed certificate of authenticity from McDivitt which reads, “I certify that this EVA checklist was flown onboard Apollo 9 and her LM Spider on Apollo 9’s flight from March 3–13, 1969. It is from my personal collection.” Also accompanied by two signed color satin-finish photos of the two astronauts who participated in the space walk: an 8 x 10 of Rusty Schweickart, signed and inscribed in silver ink, “To Art—Shakedown cruise of the first Apollo EVA & PLSS. Rusty Schweickart, Apollo 9 LMP”; and a 10 x 8 of Scott standing in the hatch of the command module, signed in black felt tip, “Apollo 9 stand up EVA, Dave Scott, Apollo 9 CMP.” The final accompaniments are two color photos of Scott and McDivitt holding the checklist after signing.

Apollo 9 was a very critical engineering and testing mission of all key aspects of making a lunar flight and landing, but done in Earth orbit. It was the first Apollo Mission to include the flight of the Lunar Module, docking and undocking of the two crafts. Further goals included: internal crew transfer from the docked CSM to the LM; special tests of the LM’s support systems; crew procedures; and tests of flight equipment and the extravehicular activity, or EVA mobility unit—the PLSS —which was the only planned EVA from the LM before an actual lunar landing; first solo flight of the CM by the CMP; and the only simultaneous EVA by the CMP & LMP while the commander was in the Lunar Module. The successful completion of this mission made possible the full dress-rehearsal flight of Apollo l0 in lunar orbit, and set the stage for the first landing of Apollo 11. Deke Slayton believed Apollo 9 to be the boldest move in Project Apollo. Pre-certified Steve Zarelli and RR Auction COA.