“I shall be at George Town on my way to Philadelphia on Monday next,” writes President Washington to fellow patriot and business partner Daniel Carroll 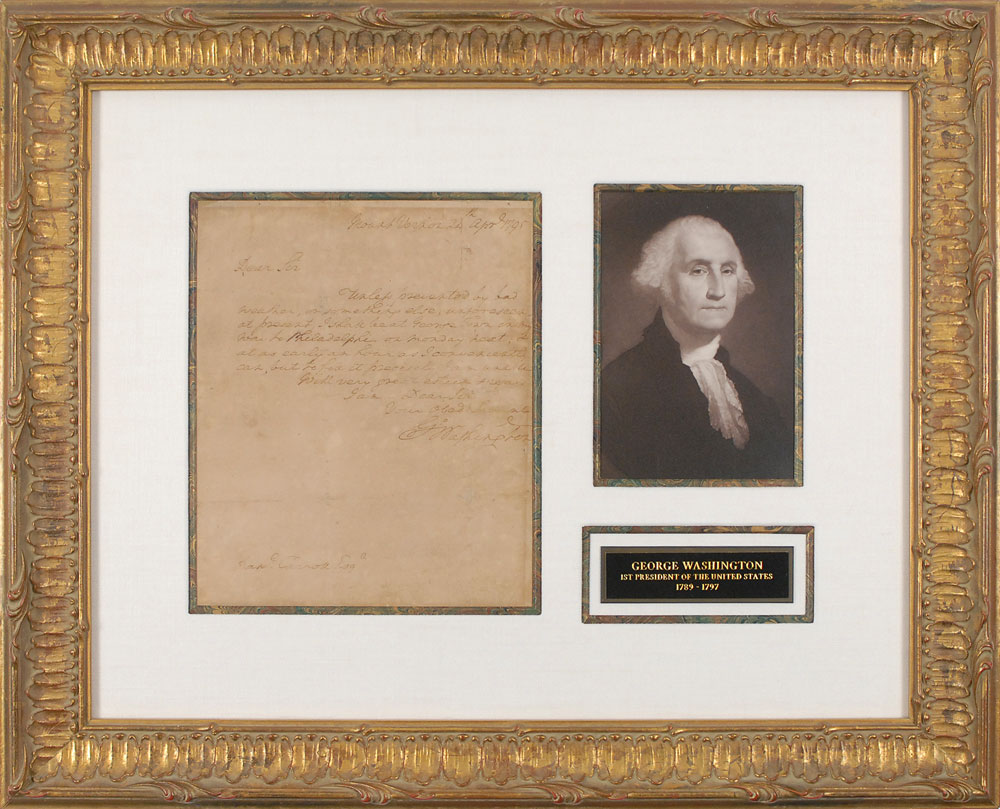 Next Lot
This lot has closed
Estimate: $0+

“I shall be at George Town on my way to Philadelphia on Monday next,” writes President Washington to fellow patriot and business partner Daniel Carroll

ALS as president signed “Go: Washington,” one page, 7.25 x 9, April 24, 1795. Letter to Daniel Carroll. In full: “Unless prevented by bad weather, or something else, unforeseen at present, I shall be at George Town on my way to Philadelphia on Monday next, & at as early an hour as I conveniently can, but to fix it precisely I am unable. With very great esteem & repose, I am, Dear Sir, Your Obedt Servant.” Nicely double-cloth-matted and framed with a portrait of Washington and a small plaque to an overall size of 22 x 18. In very good to fine condition, with intersecting folds, one through a single letter of signature, some small professional repairs to fold separations, mottled areas of light discoloration, and a uniform shade of toning from previous display.

In the first years of America’s independence, one of Washington’s most ambitious ventures was to make the Potomac River navigable as far as the Ohio River Valley, opening trade and transportation and drawing lands west of the Allegheny Mountains into the US. Requiring the cooperation of Virginia and Maryland, both of which bordered the river, Washington spearheaded the creation of the Patowmack Company, organized in May of 1785 with delegates from both states, including longtime acquaintance Daniel Carroll, a member of the Maryland Senate and the Continental Congress. All thirteen states were soon invited to send delegates to a convention in Annapolis ‘to consider how far a uniform system in their commercial regulations may be necessary to their common interest,’ leading to a general meeting in Philadelphia the following May. His leadership skills in lobbying for interstate cooperation on the Potomac set the tone for his future role as the nation’s chief executive. A beautifully penned letter to a well-known fellow patriot—one of only five men to sign both the Articles of Confederation and the Constitution, and cousin of Declaration signer Charles Carroll of Carrollton—who remained a friend of Washington’s through the Revolution, his presidency, and his final years. Pre-certified John Reznikoff/PSA/DNA and RR Auction COA.