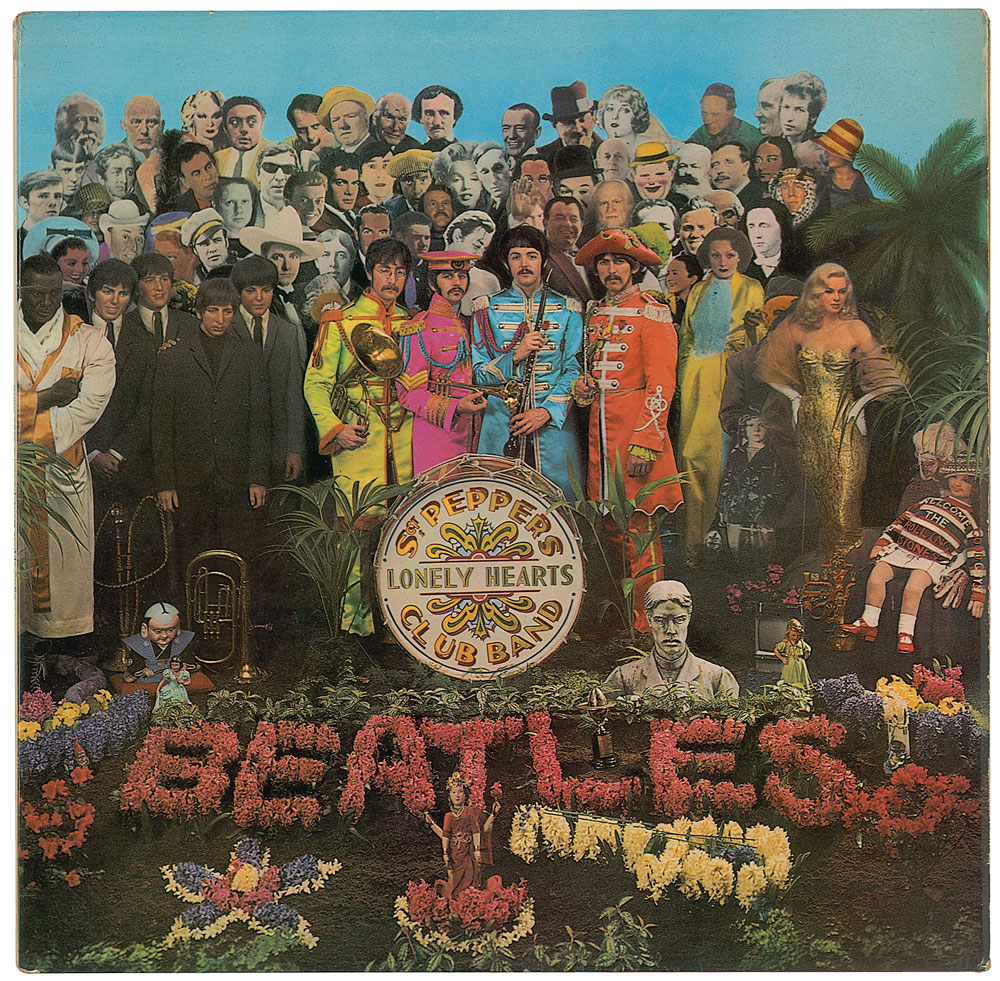 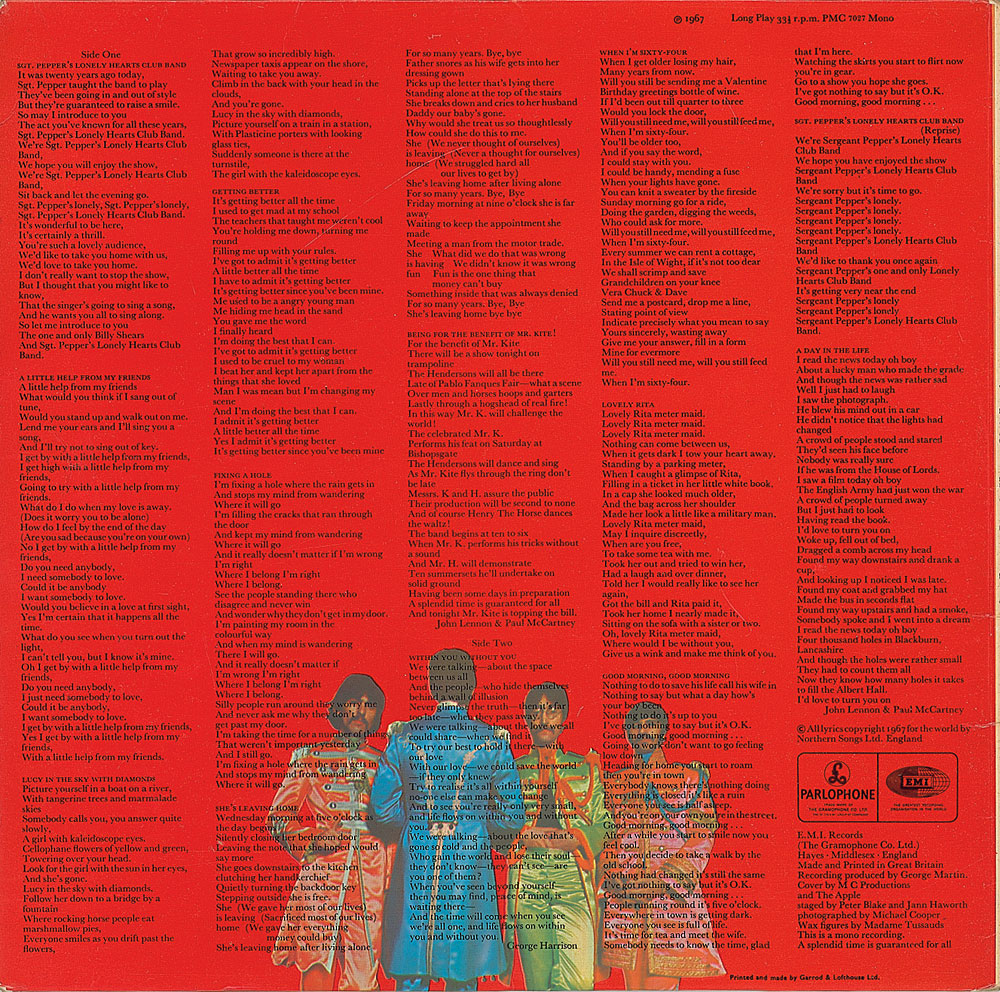 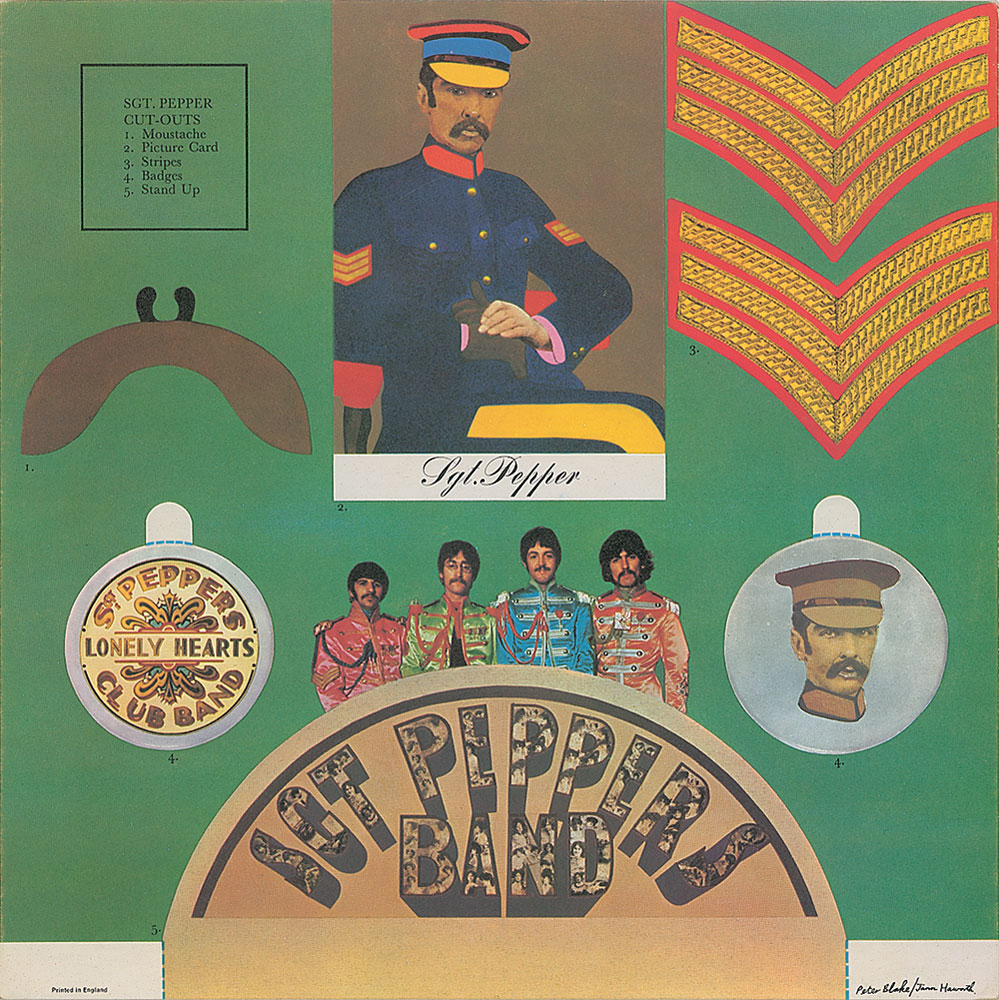 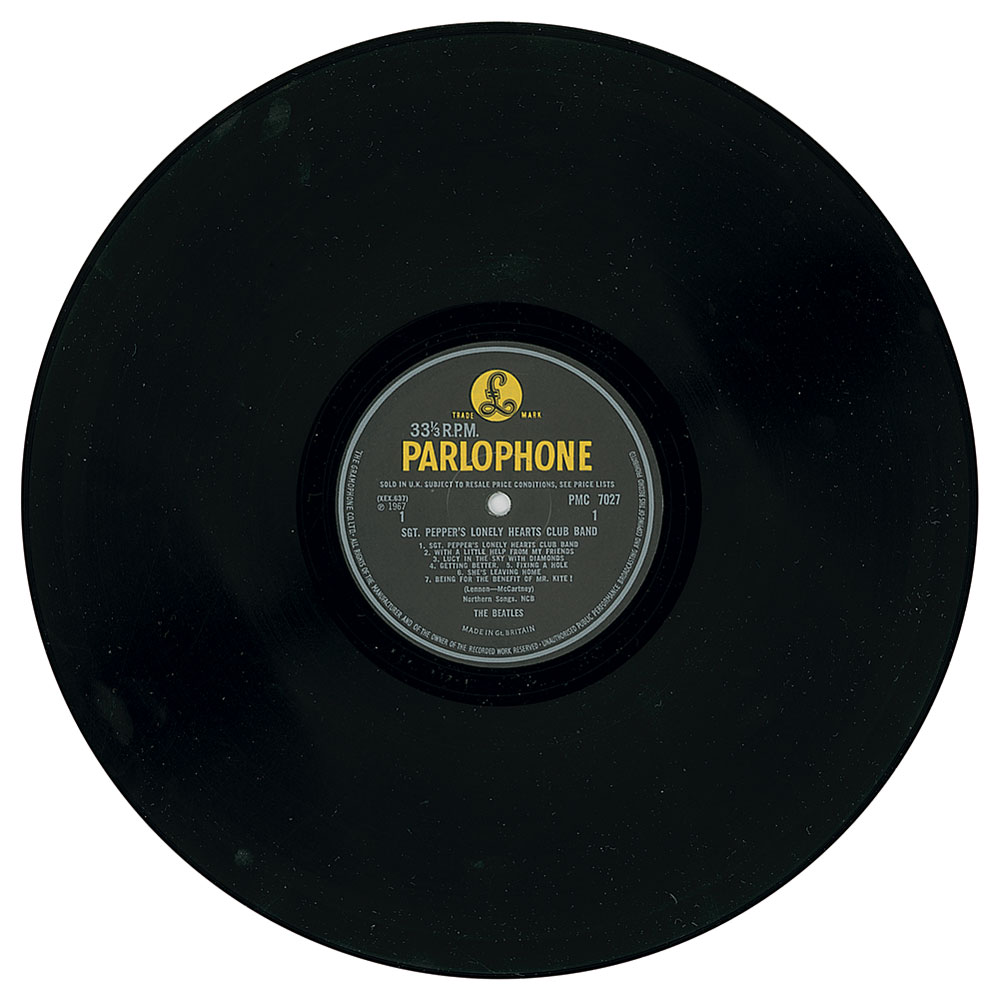 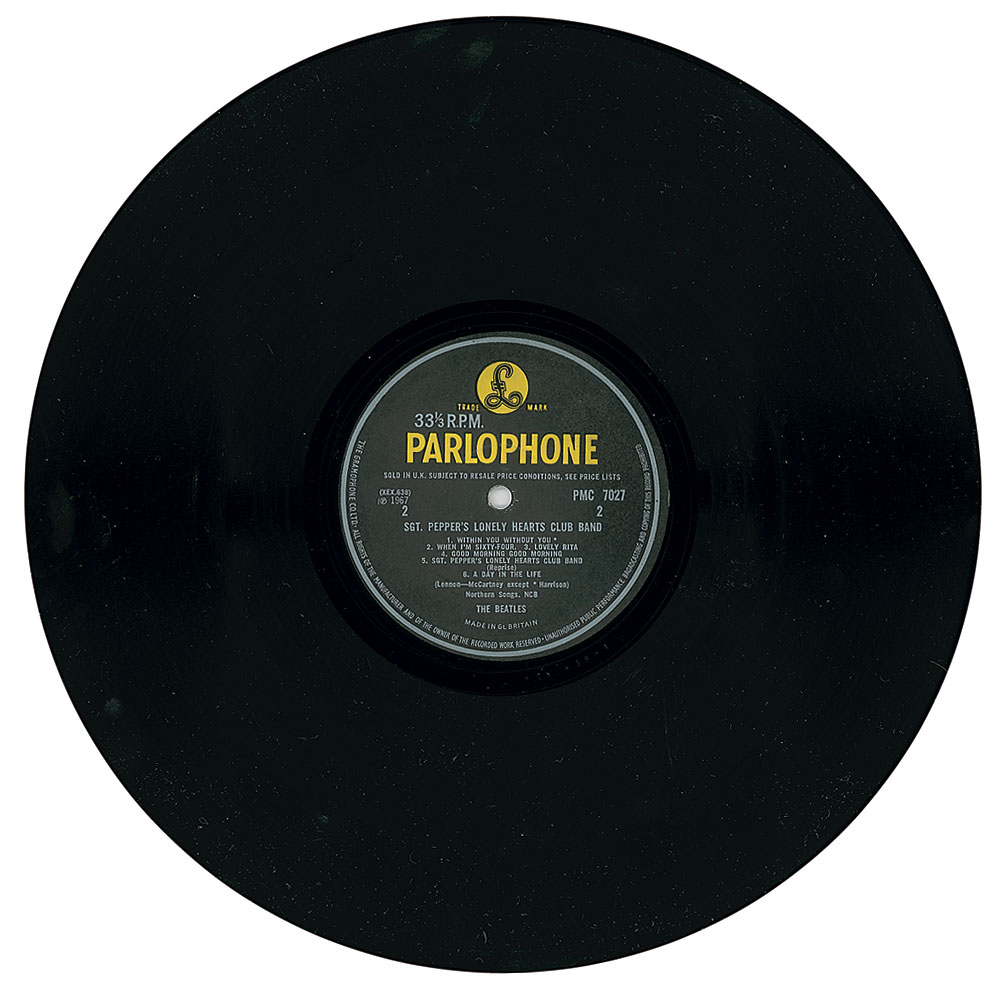 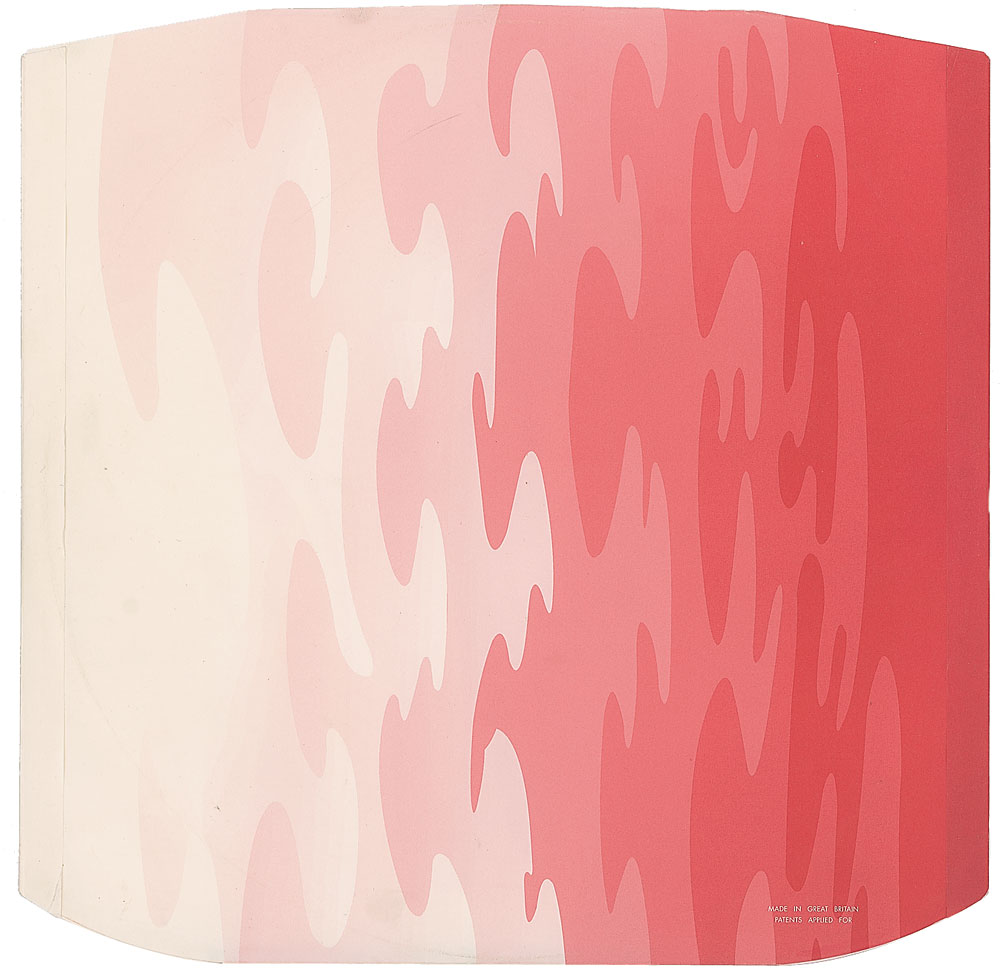 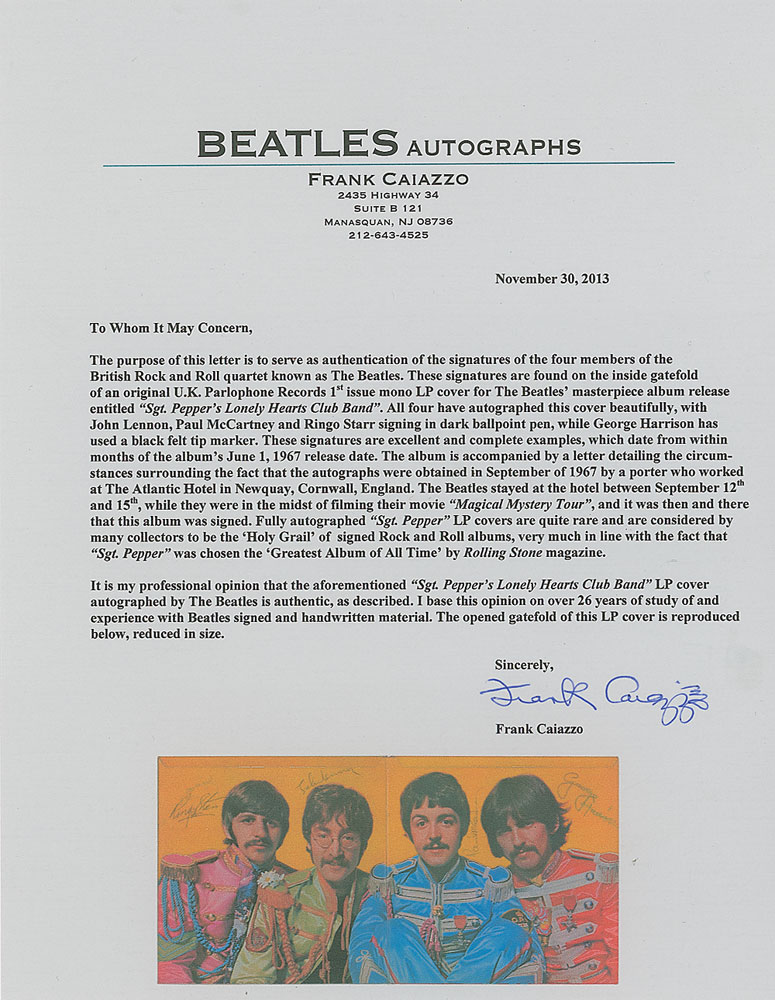 Incredibly rare U.K. Parlophone Records first issue mono Sgt. Pepper’s Lonely Hearts Club Band album, beautifully signed on the full-color gatefold in dark ballpoint by Paul McCartney, John Lennon, and Ringo Starr, and in black felt tip by George Harrison. In fine condition, with some mirroring of Harrison’s signature to opposite side of gatefold (touching the top of a couple letters of Starr’s signature), and some scattered light edge creases, not detracting from the overall impressive appearance of the album. The record is included in its red and white psychedelic inner sleeve on the right side of the double-sided sleeve, and the original full sheet of card cut-outs remains in the left.

Accompanied by a handwritten letter of provenance, dated 1985, from the original recipient of the signatures, an employee at the Atlantic Hotel, where the band stayed from September 12-15. His letter, written to a member of Sotheby’s auction house, reads, in part: “I got the LP signed when I met them in my home town nearly 20 years ago. I’d just left school and my friend’s mum got me a steady summer job as a porter at the Atlantic Hotel in Newquay. To my and everybody’s amazement, the Beatles stayed at the Atlantic for a few days while they were filming…The Sgt. Peppers L.P. had only just been released a few months prior. The manager told all the staff who worked at the hotel not to bother or ask them for their autographs…I thought it was a good idea to take something back and have it signed. I sneaked the album back into work up my top as I didn’t want the manager to see. The Beatles didn’t seem to mind anyway as they signed a few items for staff and guests. I remember having to get George’s at a later day, as he wasn’t present when Paul, Ringo, and John signed.” Also accompanied by a letter of authenticity from noted Beatles expert Frank Caiazzo, who states, “These signatures are excellent and complete examples, which date from within months of the album’s June 1, 1967, release date…Fully autographed ‘Sgt. Pepper’ LP covers are quite rare and considered by many collector’s to be the ‘Holy Grail’ of signed Rock and Roll albums.” At the time of signing, the band had become a bit more accessible to their fans—particularly during the filming of Magical Mystery Tour, during which they would occasionally stop and interact with fans, signing whatever was available on the spot, which was usually menus, autograph albums, or postcards. Fortunately, this clever young man had the luck and opportunity to have his album signed. Upon its release on June 1, 1967, Sgt. Pepper skyrocketed to the top of the charts, dominating the number one slots of both the UK Album Chart (for the next 23 weeks) and of the US Billboard 200 (for the next fifteen); to this day, it routinely tops industry and fan polls, and has earned the distinction of ‘The Greatest Album of All Time’ by Rolling Stone. Only a handful of authentic complete band-signed Sgt. Pepper albums are known to exist, and are very seldom offered for sale at public auction. This album—crisply signed by each member around his image on the vibrant gatefold—is arguably one of the most desirable pieces in the world of rock ’n’ roll collecting. Pre-certified Roger Epperson/REAL and RR Auction COA.