"I'm so [expletive] insecure that I can't help you like I should—I've got to constantly fret & bother, good heavens, what a situation!" 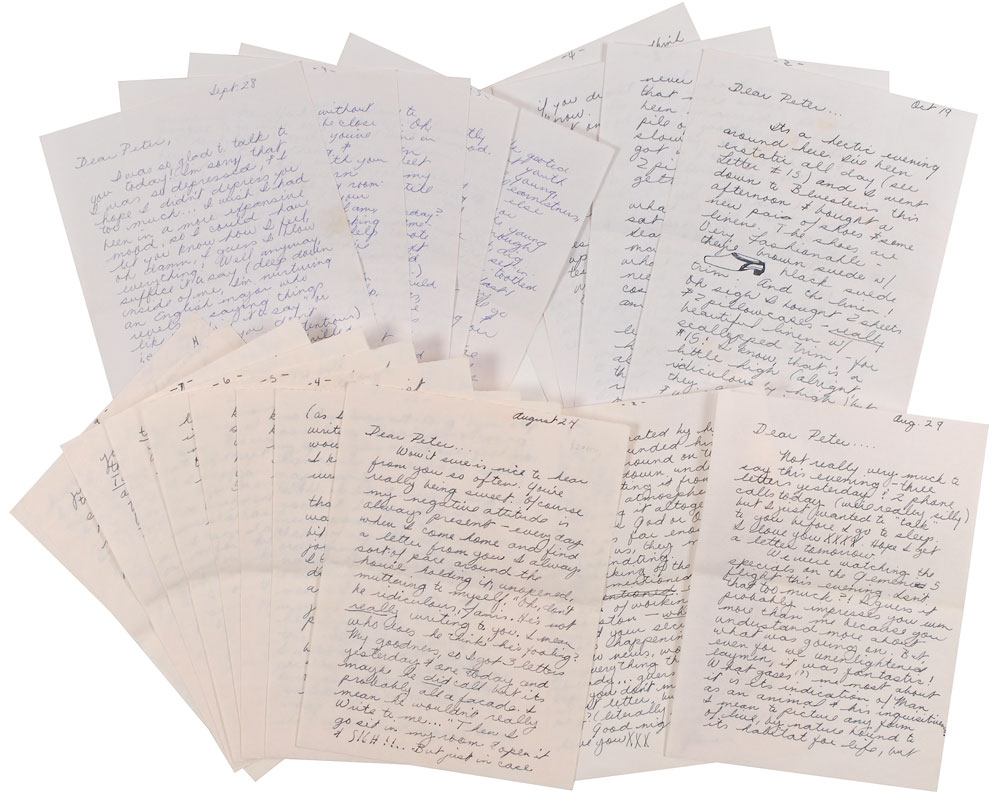 "I'm so [expletive] insecure that I can't help you like I should—I've got to constantly fret & bother, good heavens, what a situation!"

August 24: “Wow it sure is nice to hear from you so often. You're really being sweet. Talking to you about money this evening sort of sobered me up. After we hung up, I was kind-of giddy—panicky—you know walking around on my tip-toes, wringing my hands and shredding napkins, whining Oh MOAN, money! What'm I gonna do! Whimper. I never even knew anybody that wasn't plain ole ordinary! Moan, it isn't natural! We're too young! I wanted to be able to make meatloaves & stews & save money cleverly on my household budget! Oh why did this have to happen to me? I made such a good poor person. I didn't know! How was I to know? He didn't look rich! Jeez, he was as funky as anyone else—how could I have known? My family just sat back and snickered incredulously. I don't want to just live a useless bored life of ignoble ease. I do hope you don't have that much money. I'd kill you.—In fact your telling me that upset me so much that I had to go out into the backyard and play two swift games of badminton to calm down (I beat Mike, Laura beat me). So, I didn't get very much homework done. The family has been practising on the recorder as I told you. The fingering is almost like the saxophone, so Laura is already playing things w/ millions of notes. However, this afternoon, I did make it through Lesson III. I'm sort of shying away from IV—2 new notes, you know. And I‘m so terribly afraid of failure.”

August 29: “We were watching the specials on the Gemeni [sic] 5 flight this evening. Isn't that too much?! I guess it probably impresses you even more than me because you understand more about what was going on. But even for we unenlightened laymen, it was fantastic! What gases me most about it is its indication of Man as an animal & his inquisitiveness. I mean to picture any form of life, by nature bound to its habitat for life, but just so fascinated by himself & what surrounded him to be driving around on top of it, drilling down under it, & now orbiting it from without its atmosphere & soon to be leaving it altogether. If Zeus or God or Odin or someone is far enough away to watch us, they must think we're fascinating.”

September 28: “I wish I had been in a more expansive mood, so I could have let you know how I feel, oh damn, I guess I blow everything! Well anyway, suffice it to say (deep down inside of me, I'm nurturing an English major who revels in saying things like 'suffice it to say' or i.c. I hope you don't mind or think it pretentious) that I was really thrilled to talk to you—it had been a week. Damn, Peter, I have the distinct feeling that I'm just compounding & multiplying all of the troubles that you have without me. Wow, there you are in New York without anyone to be with or be close to (don‘t look…!) and you've been sick and everything. I'm so fucking insecure that I can't help you like I should—I've got to constantly fret & bother, good heavens, what a situation!”

October 19: “You wouldn't believe what I did last night—sat around reading the Sears & Roebuck catalogue, making out lists of what I want & what I need & how much they cost, etc. Sigh, I sure am happy. I have my first test in English coming up this Friday—& another test in French. I really Want to do well on my English test. We had a pop quiz a couple of weeks ago & I made a 'C' & it embarassed me. So I‘m determined to make an 'A' on this one. Do you know that I've made 'A's' on every major test that I've had so far? Isn't that good?”

With two years of hard living in San Francisco taking its toll, 22-year-old Janis Joplin returned to her hometown of Port Arthur, Texas, to turn her life around. Leaving behind her relationship with New York-native Peter de Blanc (who returned to the east coast when she left), she still held their romance at the top of her priorities, talking to him constantly and writing gushing letters daily, four of which are offered here. With her new clean and sober life, she enrolled as an anthropology major at Lamar University in nearby Beaumont and played occasional solo shows at clubs throughout Texas. Torn between her desires for a peaceful family life—joking about her evenings spent browsing Sears & Roebuck catalogs—and her love of the rock and roll lifestyle, this was a crucial period in Joplin’s life. Around the time that de Blanc broke off their engagement in 1966, Joplin gave in to her musical drive, returning to San Francisco and joining Big Brother in June. An incredibly rare glimpse into a very different side of the legendary rocker, a far cry from the whiskey-soaked, bluesy rebel that captivated audiences of the 1960s and beyond. Pre-certified Roger Epperson/REAL and RR Auction COA.