Support for the soldier who saved her from ‘Bloody Mary’ 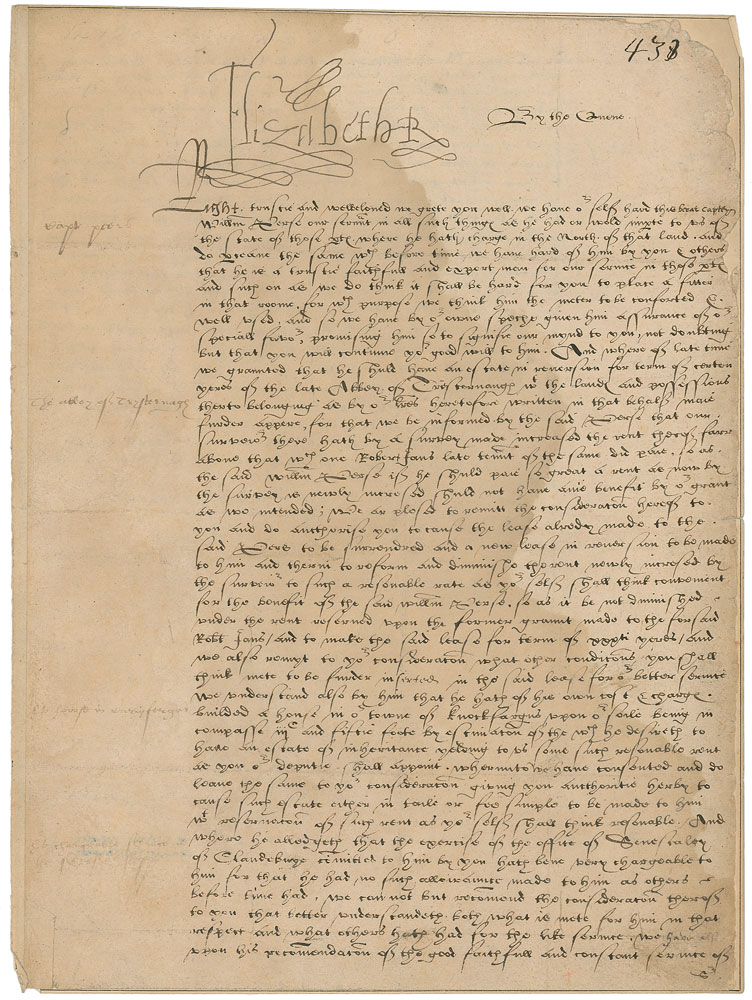 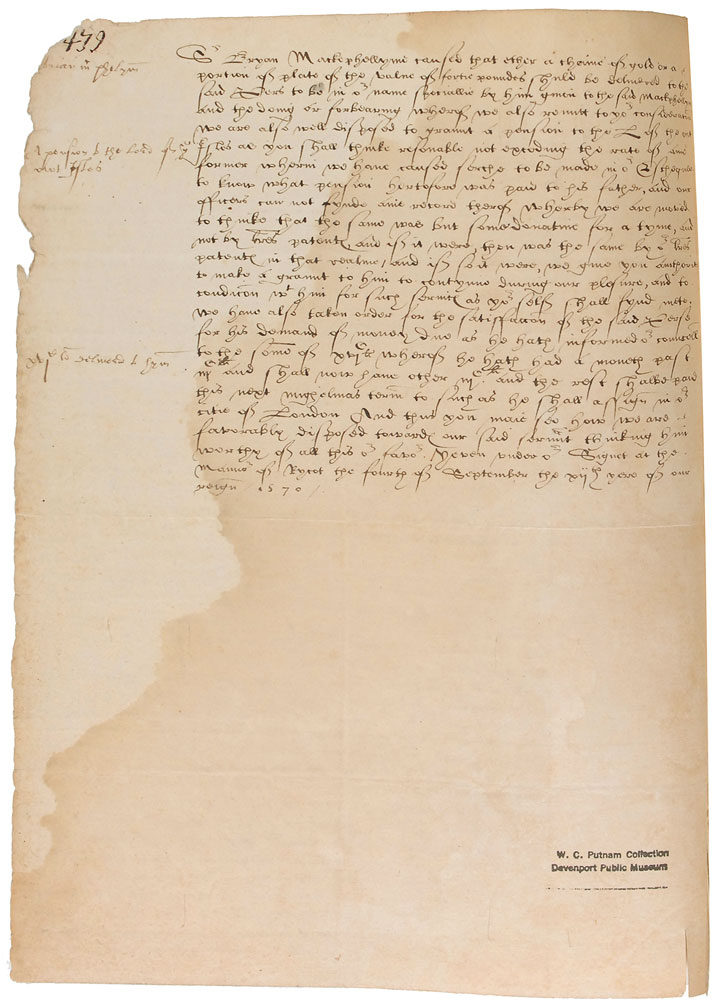 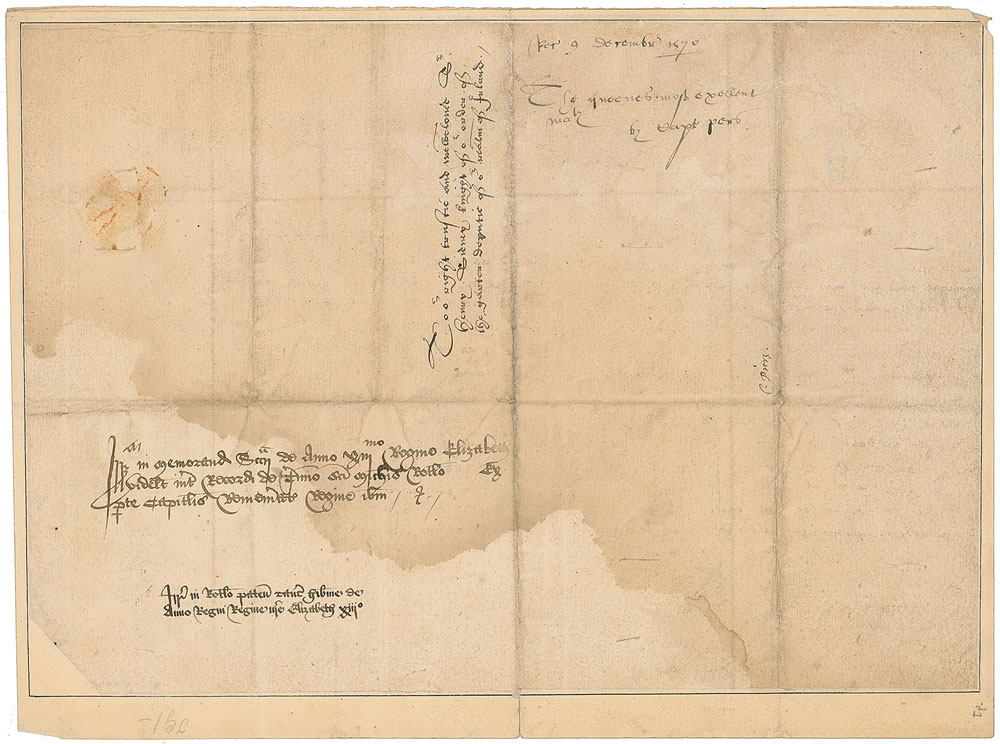 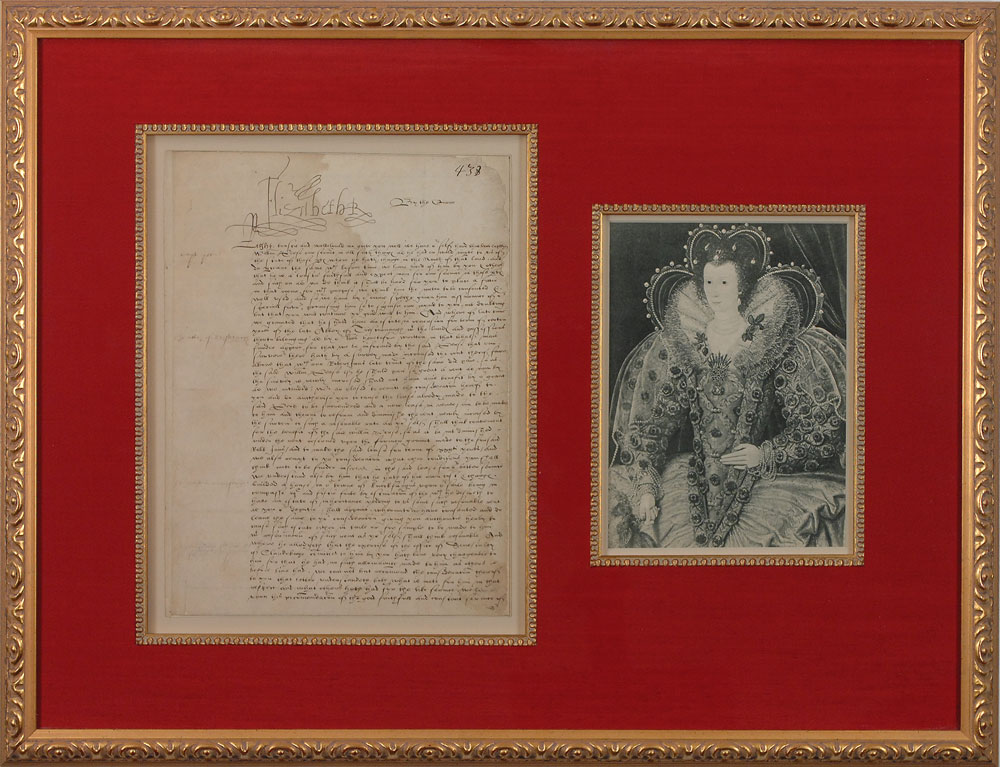 Support for the soldier who saved her from ‘Bloody Mary’

Queen regnant of England and Ireland (1533–1603), daughter of Henry VIII, who reigned from November 17, 1558, until her death. Extremely rare manuscript DS, in Early Modern English, boldly signed at the top, “Elizabeth R,” one page both sides, 9 x 12, September 4, 1570. Elizabeth orders Sir Henry Sidney, Lord Deputy of Ireland, to help rectify financial issues being had by William Piers. Lengthy document states, in part (spelling and grammar retained): "Right trustie and welbeloved we grete you well, we have our self hard this bearer capteyn William Perse…where of late time we graunted that he shuld have an estate in reversion for term of certen yeres of the late Abbey of Tresternaugh with the land and possessions thereto belonging…we be informed by the said Perse that our surveior there hath by a survey made increased the rent therof farr above that which one Robert Jans late tenant of the same did paie, so as the said William Perse if he shuld paie so great a rent as now by the survey is newly incresed shuld not have anie benefit by our grant as we intended; we ar plesed to remitt the consideration hereof to you…to reform and diminishe the rent newly incresed by the surveior to such a resonable rate as your self shall think convenient for the benefit of the said William Perse…we understand also by him that he hath of his own cost & charge builded a house in our towne of Knockfargus upon our soile…and do leave the same to your consideration giving you authoritie herby to cause such estate either in taile or fee simple to be made to him with reservation of such rent as your self shall think resonable…we have also upon his recommendation of the good faithfull and constant service of Sir Bryan Mackphellyme caused that ether a cheine of gold or a portion of plate of the value of fortie poundes shuld be delivered to the said Pers to be in our name speciallie by him given to the said Mackphellym…we have also taken order for the satisfaction of the said Perse for his demand of money due as he hath informed our councell…thus you maie see how we are favorably disposed toward our said servant thinking him worthy of all this our favor." Reverse of second integral page is docketed in several different hands. Beautifully archivally cloth-matted and framed with a portrait of the Queen to an overall size of 25.75 x 20. In very good condition, with mild dampstaining to both pages (some over the signature, but not affecting the boldness or legibility of the signature or document whatsoever), small separation and reinforcement along hinge, slight paper loss to right edge of first page, second integral page professionally inlaid to a slightly larger sheet, and two W. C. Putnam Collection stamps to reverse of first page and front of second integral page.

The man featured in this letter, William Piers (c. 1510–1603), was an English constable sent to Ireland by Queen Elizabeth in 1566. Especially noted for his attempts to drive the Scots from Ulster, he was appointed governor of Carrickfergus [Knockfargus] in 1568. The reasons for the requests of special treatment in this document can be ascertained from Burke's Peerages and Baronetcies, which describes Piers as 'a distinguished soldier and a great favorite of Queen Elizabeth' who 'on more than one occasion saved her from the vengeance of her step-sister, Queen Mary.' Captain Piers clearly ingratiated himself with Elizabeth by at times protecting her from the wrath of 'Bloody Mary,' thus earning her favor and a lifetime of substantial support. Recognizing Piers for his outstanding service, the Queen rewarded him with a large land grant which included the grounds of Tristernagh Abbey—a generous endowment apparently undermined by the recent appraisal of the property. In order to correct this, she not only orders Sidney to cut the recently increased rent, but asks that he offer Piers a low rate for his second property and provide him with additional renumeration due in the form of gold. An extraordinarily rare and truly remarkable document with incredible content and intimate associations. Oversized. Pre-certified John Reznikoff/PSA/DNA and RR Auction COA.