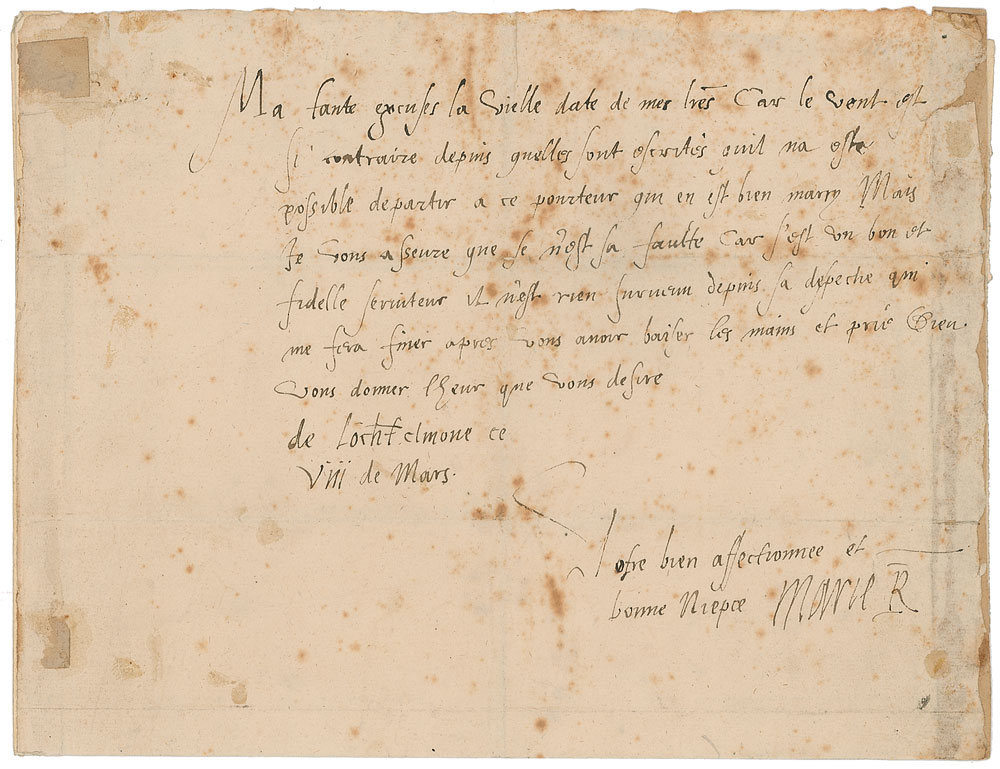 Very early and incredibly rare LS in French, signed “Your very affectionate and good-hearted Niece, Marie R,” one page, 8 x 12.25, March 8, 1564. Letter to Antoinette de Bourgogne apologizing for the lateness of several letters. In full (translated): “My aunt, excuse the old date of my letters [letters abbreviated in the text] since they have been written because of such rear/head wind that it was not possible for the porter who is in fact a good seaman to take them. But I assure you that it is not his fault for I have a good and faithful servant. Nothing has occurred since his last dispatch that he will have finished for me after having kissed your hands and pray to God to grant you what you desire.” In very good condition, with intersecting folds, mounting remnants and repairs to right edge, and scattered foxing, none affecting the legibility of the letter. Published in A. Labanoff’s Lettres, Instructions et Memoires de Marie Stuart, Reine d'Ecosse (London 1844), volume I.

Queen of Scotland at only six days old, Mary’s hand became a crucial element in 16th century European politics. When the Scottish parliament annulled her betrothal to Prince Edward of England, war ensued, resulting in the Scottish defeat at Pinkie in 1547. The five-year-old queen was sent to the French court, where she would spend the remainder of her childhood. There she married Francis, Dauphin of France, who was crowned Francis II in 1559, making her queen consort at age 17. Her reign in France was short-lived, however, when she became a widow the following year and returned to her native land of Scotland. Torn between Catholic and Protestant factions, Scotland provided a dangerous and complex political scene with which Mary was entirely unfamiliar; though a devout Catholic, she accepted the newly established Protestant ascendancy, causing both factions to regard her with suspicion. Anxious to gain control and ambitious for the English throne, she married her first cousin, Lord Darnley, in 1565. Auction records since 1950 do not list a single letter from Mary pre-dating this marriage, making this piece of the utmost scarcity and desirability. Pre-certified John Reznikoff/PSA/DNA and RR Auction COA.