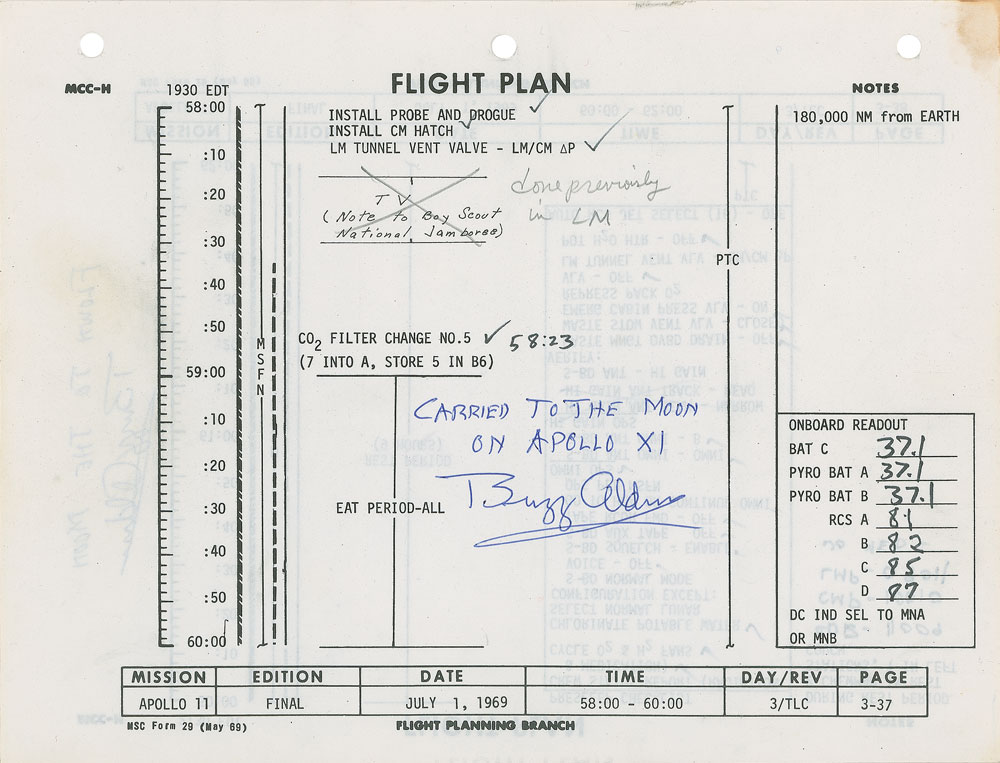 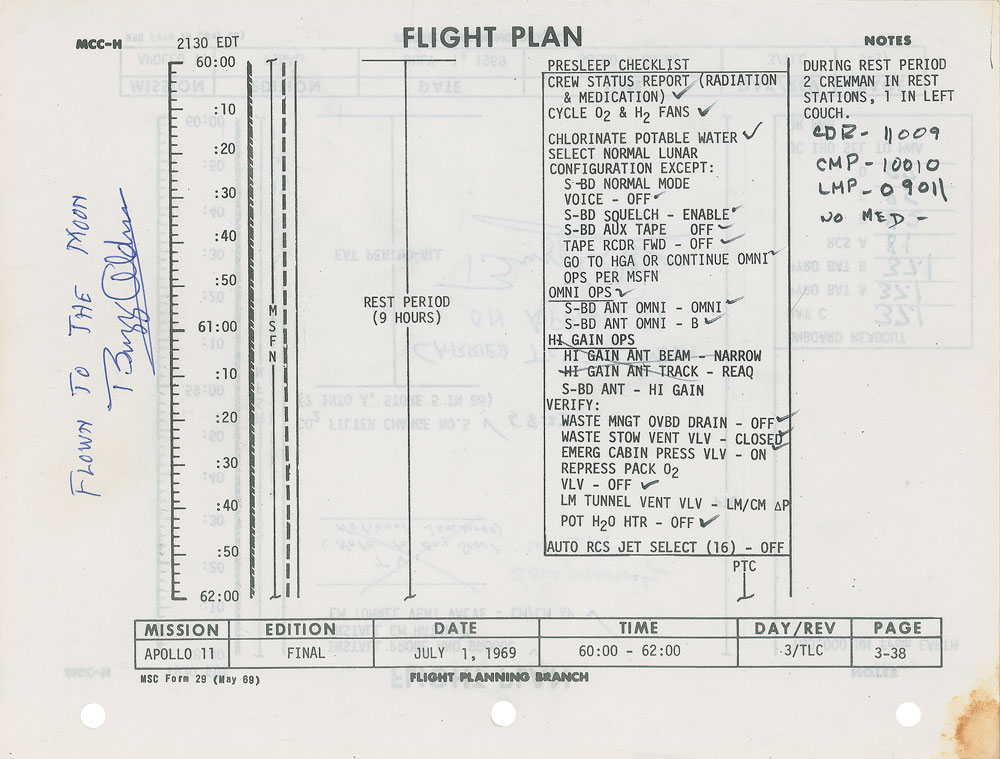 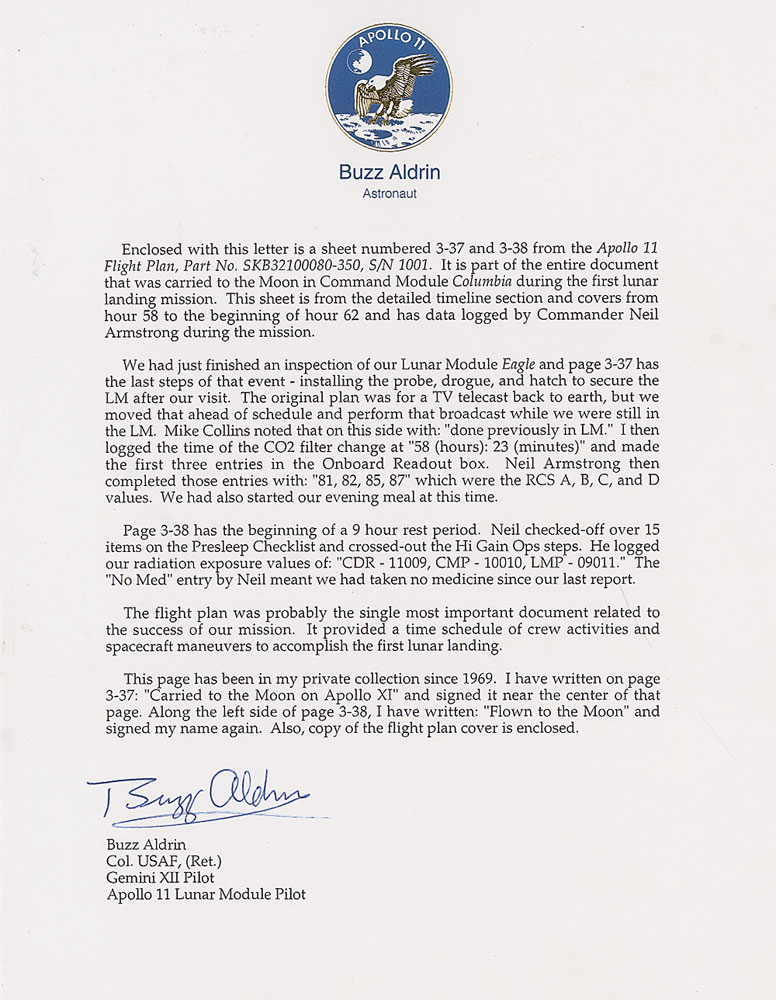 Original flown printed page from the flight plan used and carried to the moon on the Apollo 11 mission, covering the hours 58 to 62 after liftoff, hand-notated by Neil Armstrong, Buzz Aldrin, and Michael Collins, one page both sides, 10.5 x 8, pages 3-37 and 3-38, signed in ballpoint on page 3-37, “Carried to the moon on Apollo XI, Buzz Aldrin,” and on page 3-38, “Flown to the moon, Buzz Aldrin.” Page 3-37 shows the last steps of the Lunar Module inspection—installing the probe, drogue, and hatch to secure the LM after the inspection. A planned TV message to a Boy Scout Jamboree was crossed out in pencil by Collins who also added “Done Previously in LM.” Aldrin then added the time of the CO2 Filter change at “58.23,” and also the first three entries on the right hand side “Onboard Readout,” box, with Neil Armstrong completing the readout with entries for the RCS (Reaction Control System) A, B, C and D with values of 81, 82, 85 and 87. Page 3-38 covers the Mission Elapsed time of 60 to 62 hours and pertains to the pre-sleep checklist. This page is heavily annotated by Armstrong, who has checked off 16 steps in the checklist, also crossing out the Hi-Gain ops section. Armstrong also made the notes in the top right corner which are the crew’s individual levels of exposure to radiation, listing the crew by their mission titles, “CDR—11009,” “CMP—10010,” and “LMP—09011,” adding “No Med,” meaning that the crew had taken no medicines at that time. In fine condition, with a small spot to one corner tip.

This page is accompanied by a letter of provenance and explanation signed by Aldrin, which reads, in part: “Enclosed with this letter is a sheet numbered 3-37 and 3-38 from the Apollo 11 Flight Plan…. It is part of the entire document that was carried to the moon in Command Module Columbia during the first lunar landing mission. This sheet is from the detailed time line section and covers hour 58 to the beginning of hour 62 and has data logged by Commander Neil Armstrong.…We had just finished an inspection of our Lunar Module Eagle and page 3-37 has the last steps of that event…I then logged the time of the CO2 filter change…and made the first three entries in the Onboard readout box… Neil Armstrong then completed those entries with ‘81, 82, 85, 87’…Neil checked-off over 15 items on the Presleep Checklist…he logged our radiation exposure values…The flight plan was probably the single most important document related to the success of our mission. It provided a time schedule of crew activities and spacecraft maneuvers to accomplish the first lunar landing…. This page has been in my private collection since 1969.” An incredible opportunity to acquire a piece of Apollo 11 flown material, notated by all three crew members of the historic mission, with direct astronaut provenance, as any item flown on the first moon mission is highly coveted by space collectors. Pre-certified Steve Zarelli and RR Auction COA.