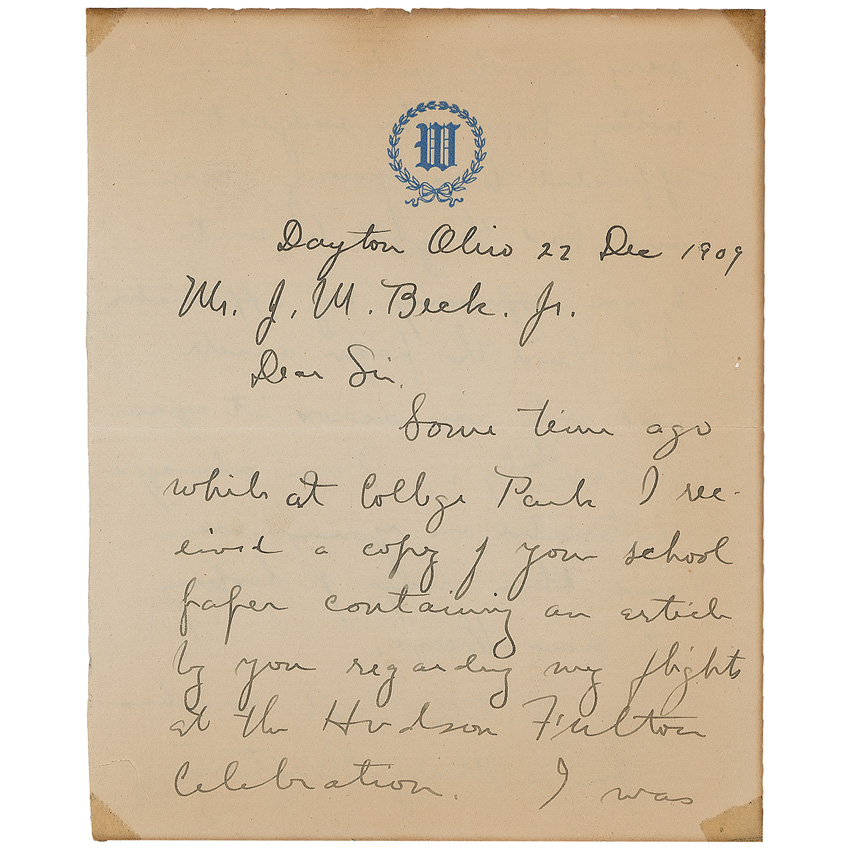 ALS, three pages on two separate sheets, first sheet measuring 5 x 6.25, with second page trimmed to a size of 5 x 2.5, very rare personal letterhead, December 22, 1909. Letter, written from Dayton, Ohio, to J. M. Beck, Jr. In full: “Some time ago while at College Park I received a copy of your school paper containing an article by you regarding my flight at the Hudson-Fulton Celebration. I was very much interested in noting how the subject appealed to a young man and had thought to write to you expressing my appreciation but laid the paper aside and only ran across it again recently. I am always interested in young men and their ways of looking at new things. With best wishes for a Merry Christmas and Happy New Year.” Toning and tape remnants to corners of first page, a small edge tear to first page, a partial separation along central horizontal fold to first page, and moderate toning and soiling to second page, as well as some brushes to last sentence and mounting remnants to reverse, otherwise very good condition. Accompanied by the original Wright Brothers mailing envelope addressed in Wright’s hand. Also accompanied by a reproduction photo of a young man, possibly Beck, standing in front of what appears to be a Wright flier with a canoe attached to the bottom, possibly taken at the Hudson-Fulton Celebration mentioned in the letter.

Held in the fall of 1909, the Hudson-Fulton Celebration commemorated two major events in New York and New Jersey history: the 300th anniversary of Henry Hudson’s discover of the Hudson River, and the 100th anniversary of Robert Fulton’s first successful application of the steamboat. New York City organizers, including J. P. Morgan and Andrew Carnegie, turned the two-week event into a full display of modern achievement. Having recently demonstrated flights in Europe with great success, Wilbur Wright was invited to fly for the crowds; on September 29th he set to the air, circling the Statue of Liberty. Six days later he returned, making a 33-minute flight over the Hudson River to Grant’s Tomb and back, enabling a million New Yorkers to see their first airplane flight. Honored to give this demonstration and show the world what was possible, Wright hoped to inspire younger generations to continue innovating and exploring new technologies. He achieved his goal with a young man named James M. Beck, impressed and enthused by the miraculous display. This incredibly rare letter, on Wright letterhead that we have never before seen, captures the excitement of early flight, instilling the spirit of innovation in the next generation. Pre-certified John Reznikoff/PSA/DNA and RR Auction COA.