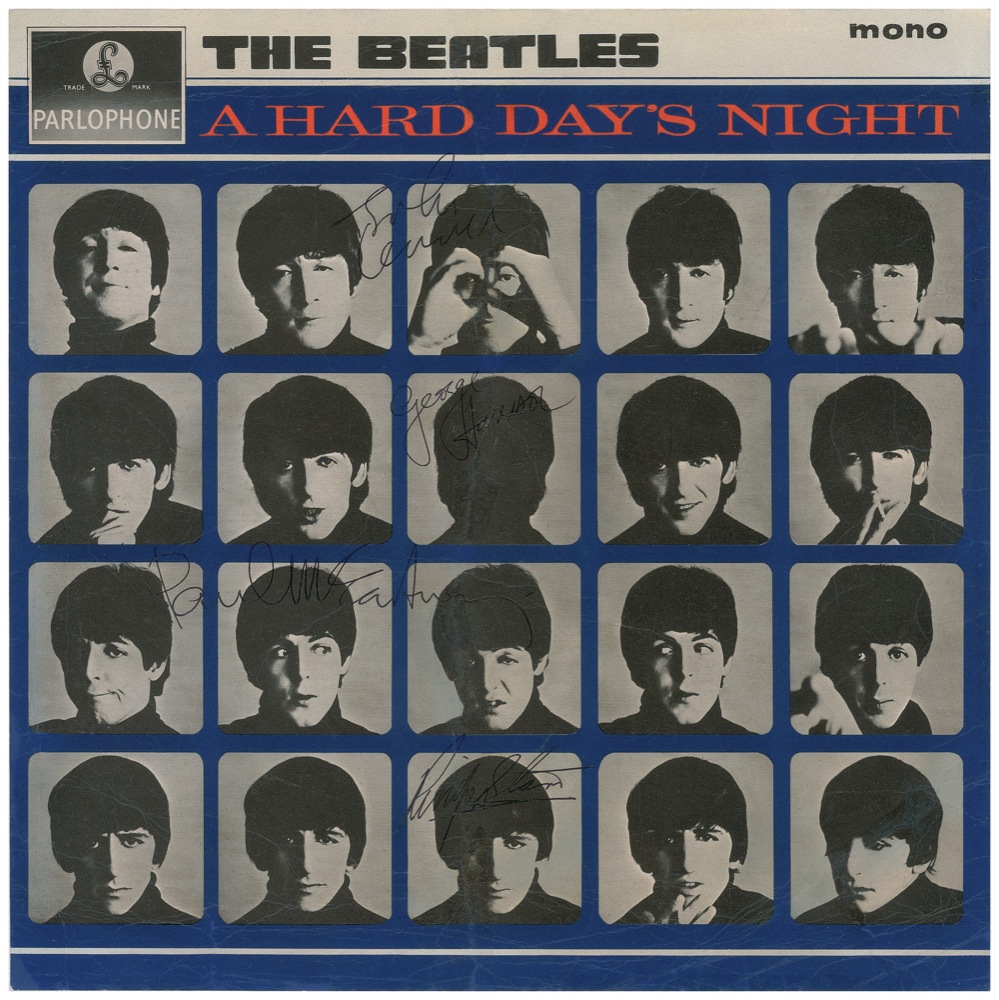 Original vintage promotional cover slick for the British album release of A Hard Day's Night, presented to a stewardess on The Beatles’ flight from London to Liverpool on July 10, 1964, signed in black ballpoint, “John Lennon,” “George Harrison,” “Paul McCartney,” and “Ringo Starr,” with each band member signing on the line of his respective images. In fine condition, with light central vertical crease passing through a small part of each of the four signatures, scattered creasing, heavier to bottom portion, and moderate contrast to portions of each signature passing through the darker images. The record is included.

Accompanied by a letter of authenticity from Vivian Nevin stating, in part: “This is to certify that the Promo Cover for the album 'A Hard Day's Night' was signed & obtained during the flight from London to Liverpool as The Beatles flew back to their home city on a British Eagle Airlines aircraft, 10th July 1964. The band was 'coming home'…to celebrate the grand success they had achieved…including conquering America & a successful world tour. On that day they also attended a civic reception in their honour during the afternoon at the city's Town Hall with the Lord/Lady Mayor & to make a personal appearance for the Northern premiere of their first full-length feature film, 'A Hard Day's Night,' at the Odeon Cinema that same evening. It was also the date of the album's release; this was to make the cover unique from that date fully signed. From Speke airport some 200,000 people packed every inch of the route to the City…Since that momentous occasion it has been said that the group valued this reception more than any other in their career! A total of 4 stewardesses on the flight were each given a signed copy as a personal 'Thank You' from the group on this historic day for The Beatles & indeed Liverpool. I was employed as an Air Stewardess from the beginning of 1964 for 1 year on British Eagle Airlines working throughout my career on the Britannia Aircrafts.”

Also included is a short handwritten statement of provenance and an original color glossy portrait of Nevin on the stairway to one of the planes, as well as a photo of the other stewardesses, holding matching signed slicks, greeting the Beatles at the bottom of the stairs to their plane. A letter of authenticity from noted Beatles expert Frank Caiazzo, is also included, which reads, in part: “This album flat…was the final version of the front cover of the LP which would have been used in the assembly of the album jacket-but it was 'taken off the line' before being laminated and had it not, there is no doubt that it would have been incorporated as a component of a fully constructed Parlophone Records LP jacket. This item was gifted to a British Eagle Airlines stewardess who was working on the Beatles' flight from London to their hometown…After it was signed by The Beatles, the album cover flat was presented by the band as a thank you for good service provided by the stewardesses on that day. There were four such, and this one is autographed as nicely as it could have been by all on that day, which coincidentally was also the day the 'A Hard Day's Night' album was released.” Pre-certified Roger Epperson/REAL and RR Auction COA.