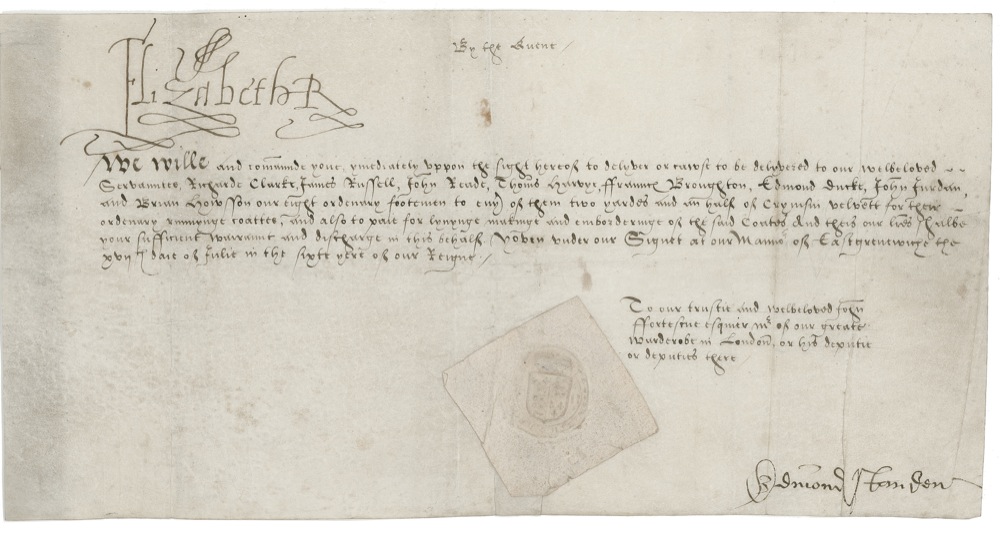 Queen regnant of England and Ireland (1533–1603), daughter of Henry VIII, who reigned from November 17, 1558 until her death. Extremely rare manuscript vellum DS, in Old English, boldly and exquisitely signed “Elizabeth R,” one page, 11.5 x 6, dated July 17, 1564. A warrant directed to John Fortesque, Keeper of the Great Wardrobe, ordering to be delivered to each “of our eight ordinary footmen” two and one-half yards “of Crymson Velvett for there ordenary runnying coattes, and also to paie for lynynge makinge and emborderinge of the said Coates.” The eight footmen named are Richard Clarke, James Russell, John Reade, Thomas Harvye, Francis Broughton, Edmond Ducke, John Jordan, and Brian Morrison. Nicely signed along the top by Elizabeth, and countersigned by Edmond Standen. In very good condition, with several vertical folds and creases, a few through several letters of signature, scattered creasing, and some scattered mild light toning and soiling. The embossed paper seal remains crisp and intact.

An exceptionally well-preserved document bearing the Queen’s famed and flourished signature, the warrant represents what would have been a typical fulfillment from Elizabeth’s life-long Keeper of the Great Wardrobe. Having served the Queen during her time as princess, Fortesque would remain in her service and by her side until she passed away in 1603. The order itself describes the components of the footmen’s royal uniforms, and more pointedly, their trademark crimson velvet running coats. In Roy Strong’s study on The Good Queen Bess, The Cult of Elizabeth, he recollects the attire of the Queen’s bold procession as “men in black skullcaps and crimson tunics embroidered with gold...jerkins with sleeves of crimson velvet with ‘our letters before and behind having the crown embroidered over the said letters’ and velvet nightcaps,” these eight footmen - “four grooms for coaches and four for litters” - would accompany Elizabeth in her canopied “triumphal car.” Remarkably crisp and bold, this is a highly-coveted piece of royal history from one of Britain’s most legendary rulers. Pre-certified John Reznikoff/PSA/DNA and RR Auction COA.