Lee’s historic 1865 Farewell Address and surrender—General Order No. 9—from the grounds of Appomattox Courthouse 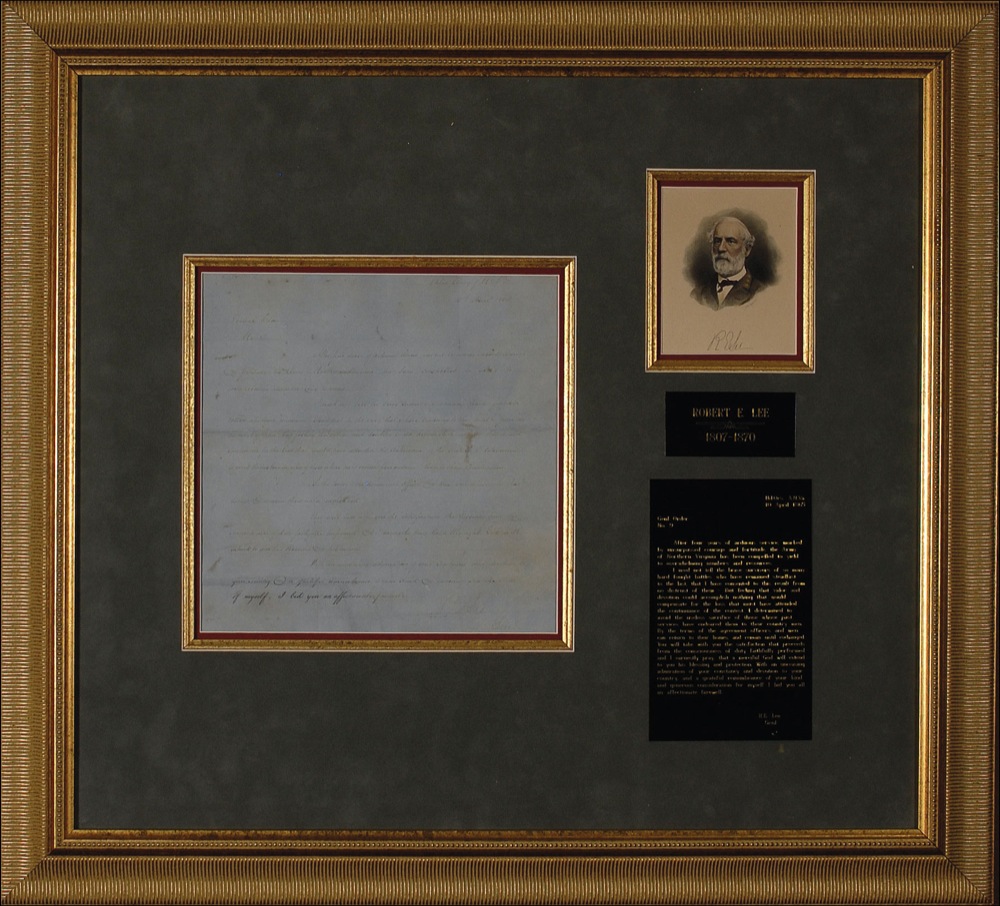 Lee’s historic 1865 Farewell Address and surrender—General Order No. 9—from the grounds of Appomattox Courthouse

Rare and desirable original manuscript DS, signed “R. E. Lee, Genl,” one page, 10.75 x 10.75, April 10, 1865. Headed at the top, “Hd. Qrs. Army of No. Va.,” and “Genl Order No. 9,” the document reads, in full: “After four years of arduous service marked by unsurpassed courage and fortitude, the Army of Northern Virginia has been compelled to yield to overwhelming numbers and resources.

I need not tell the brave survivors of so many hard fought battles who have remained steadfast to the last that I have consented to this result from no distrust of them. But feeling that valor and devotion could accomplish nothing that could compensate for the loss that must have attended the continuance of the contest, I determined to avoid the useless sacrifice of those whose past services have endeared them to their countrymen.

By the terms of the agreement, officers and men can return to their homes and remain there until exchanged.

You will take with you the satisfaction that proceeds from the consciousness of duty faithfully performed; and I earnestly pray that a Merciful God will extend to you his blessings and protection.

With an unceasing admiration of your constancy and devotion to your Country, and a grateful remembrance of your kind and generous consideration of myself, I bid you all an affectionate farewell.”

Double suede matted and framed with a hand-colored bust portrait of Lee, a name plate, and an engraved metallic transcript of General Order No. 9 to an overall size of 30.5 x 28. Most of the text and signature is quite light, but still fairly legible, intersecting folds, one through a single letter of signature, and scattered toning and soiling, otherwise very good condition.

An amazing document that became a part of history, this page—an original, official message from the commanding general to his Confederate troops, signed by Lee on April 10—was posted to a tree outside the Appomattox Courthouse. General Lee had hoped that this General Order No. 9 would alleviate the South’s humiliation and overwhelming sense of loss that came with the surrender, and show his respect. Confederate forces had held the general in such high regard and respected him so much that they would have gladly continued to fight...following him to certain death.

Lee, however, cared too much about his men to sacrifice them to what was now a lost cause. “I need not tell the brave survivors of so many hard fought battles who have remained steadfast to the last that I have...no distrust of them,” he states. But “determined to avoid the useless sacrifice of those whose past services have endeared them to their countrymen,” Lee assures them that they will take with them “the satisfaction that proceeds from the consciousness of duty faithfully performed” and his “unceasing admiration of your constancy and devotion to your Country.” Having delivered the message and with almost every major Southern city had fallen to advancing Union forces, Lee knew the war was over, and reluctantly accepted Grant’s terms for surrender.

To ease the sense of defeat, Charles Marshall, Lee’s aide-de-camp—who had drafted terms for the surrender of the Army of Northern Virginia—was instructed by Lee to prepare a statement ‘in which his feelings toward his men were strongly expressed.’ Lee edited the first draft, making a few minor changes and striking out a paragraph which he felt would keep alive the current hostilities between the North and South. Marshall rewrote the order and gave it to a clerk to be copied by hand and distributed to Corps commanders and other members of the army staff. Each of these copies was personally signed by Lee that April day. This particular order was given to the family of General J. J. Archer, who was taken prisoner of war at the Battle of Gettysburg—the first general officer captured from the Army of Northern Virginia. Archer was exchanged late in the summer of 1864, but died of ill health shortly thereafter. Truly remarkable in content and its role in history. Oversized. Pre-certified John Reznikoff/PSA/DNA and RR Auction COA.