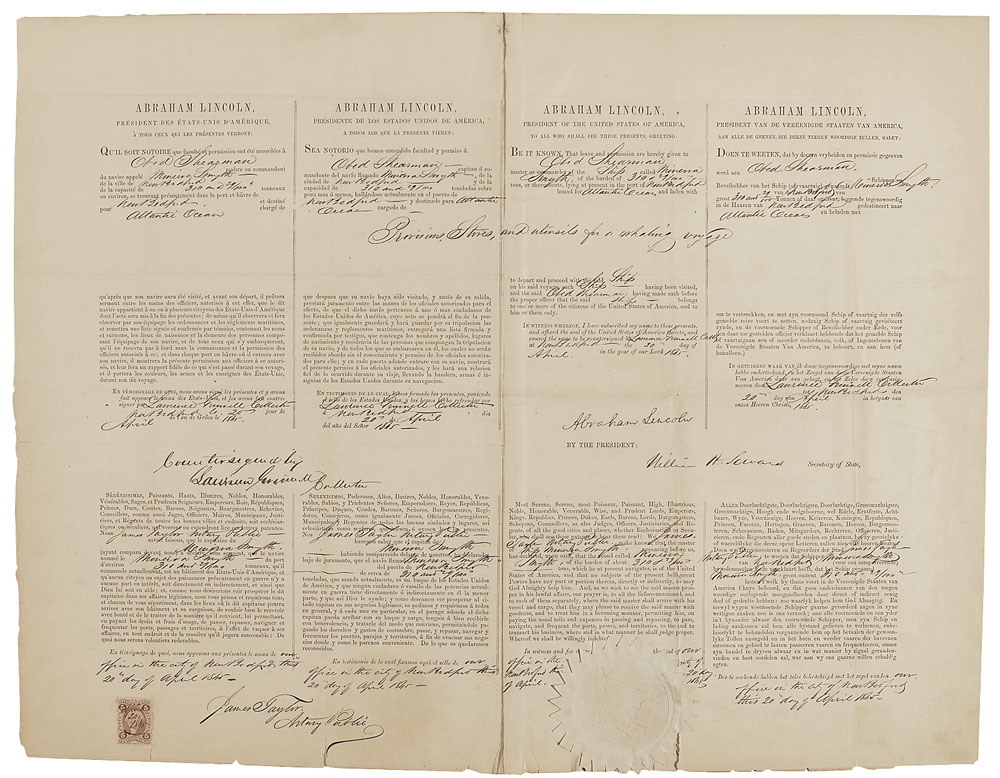 Intriguing and desirable partly-printed DS as president, one page, 22.75 x 17, April 20, 1865. Four language ship’s paper issued to “Obed Shearman, master or commander of the Ship called Minerva Smyth…lying at present in the port of New Bedford bound for Atlantic Ocean and laden with provisions, stores, and utensils for a whaling voyage.” Signed in the center by Lincoln, “Abraham Lincoln,” and countersigned by Secretary of State William H. Seward. Paper also bears a five cent revenue stamp to lower left. Intersecting folds (one passing through a single letter of the signature), partial separations along central vertical fold (old reinforcement on the reverse), and slight chipping along bottom edge, otherwise fine condition. The white wafer seal is lightly toned but intact, and Lincoln’s signature is bold.

This document was, obviously, signed in advance of Lincoln’s fatal April 14 journey to the theater, and subsequently issued to captain of the Minerva Smyth before the vessel set sail. On April 20—the date that the commander of the Minerva Smyth received these posthumous orders—the War Department announced that it was offering a $100,000 reward for the capture of John Wilkes Booth, who was still at large. The day after this document was issued, Lincoln’s body and the remains of his son, William Wallace Lincoln, were placed on a train, which left Washington, D.C. headed for a presidential burial in Springfield, Illinois. A remarkably scarce document, unusual on many levels. Oversized.

This item is listed online only and does not appear in our print catalog. Pre-certified John Reznikoff/PSA/DNA and RRAuction COA.