Colt Model 1860 Army revolver captured by a Confederate trooper, plus his knife and belt rig 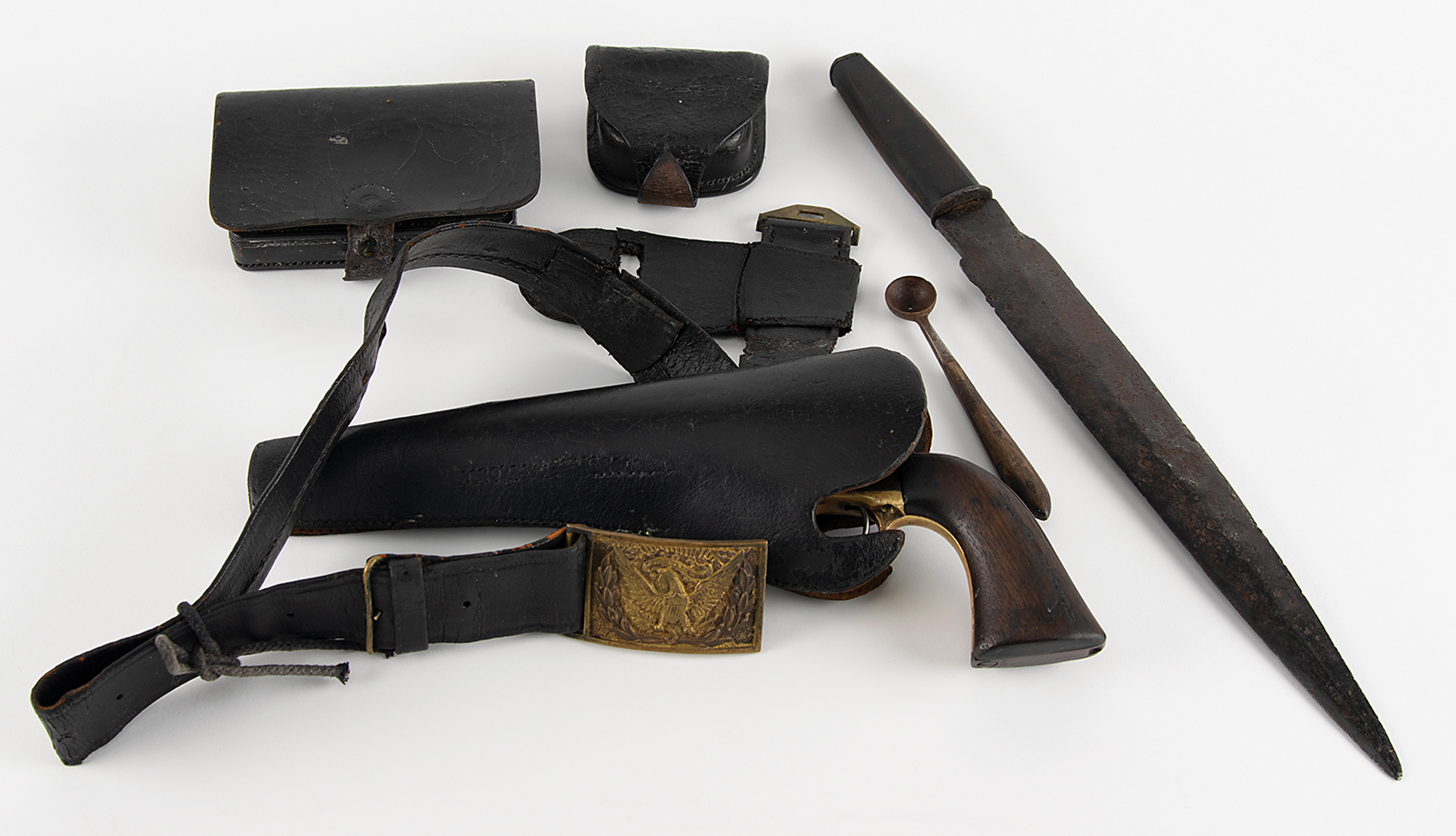 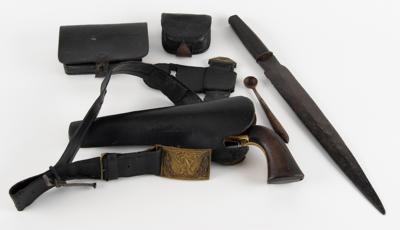 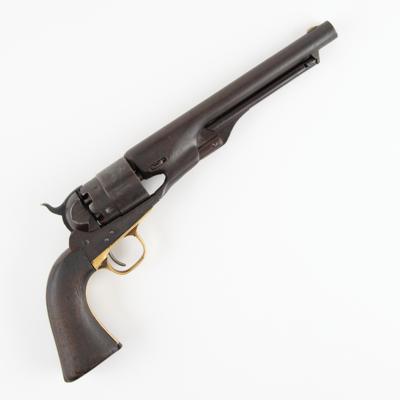 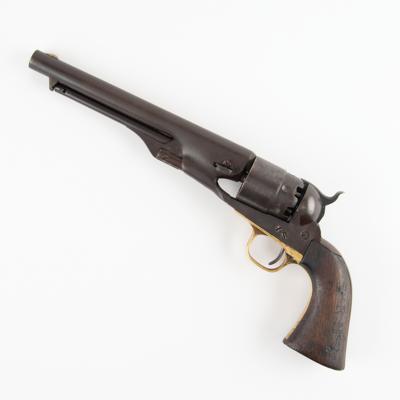 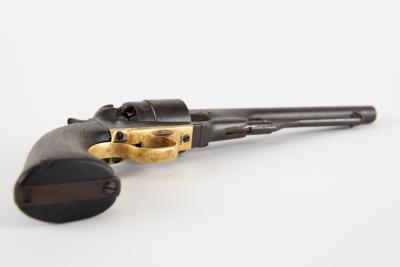 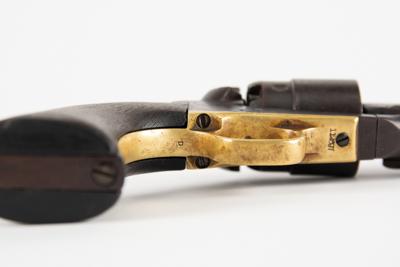 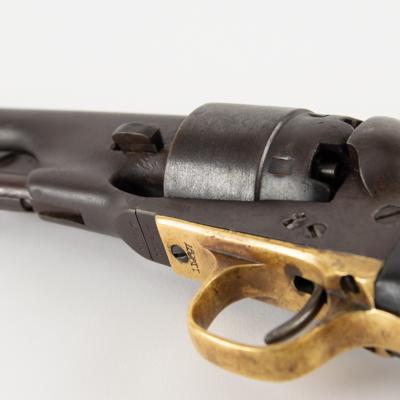 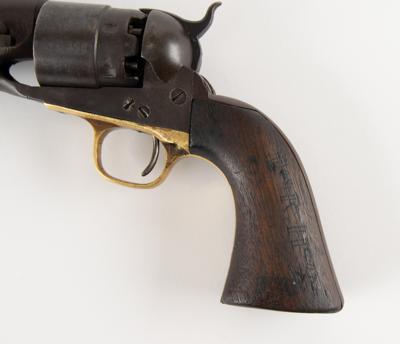 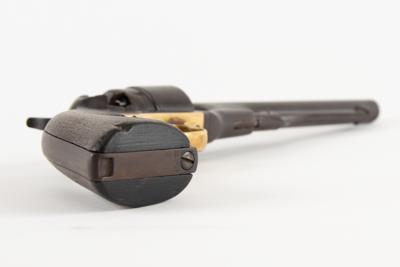 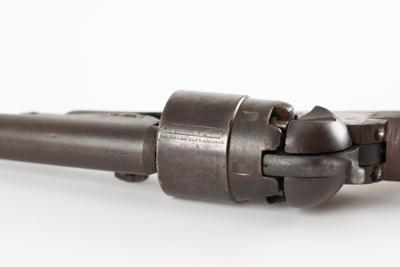 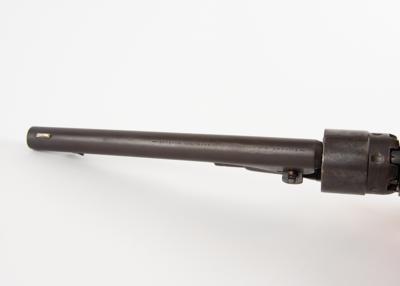 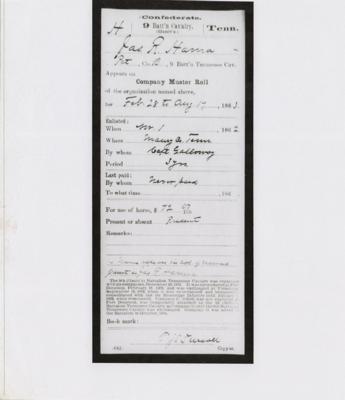 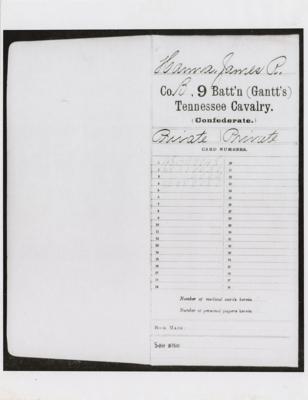 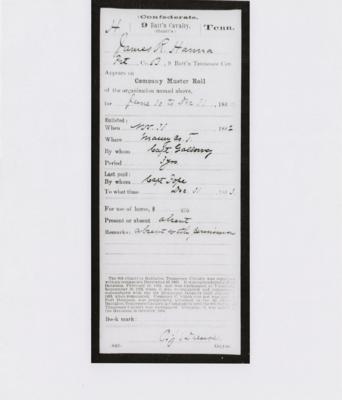 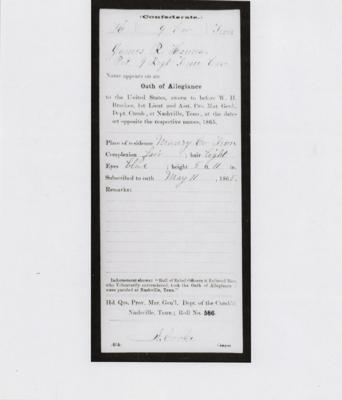 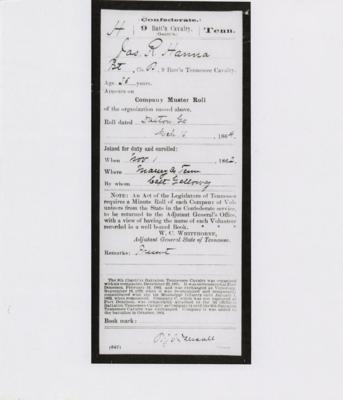 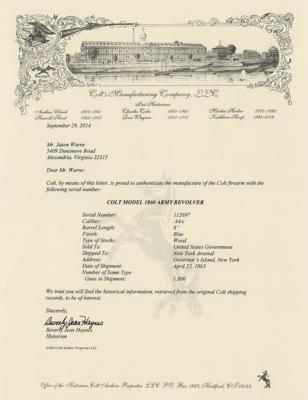 Colt Model 1860 Army revolver captured by a Confederate trooper, plus his knife and belt rig

Splendid grouping of Civil War items belonging to Private James R. Hanna, a trooper in Lt. Colonel George Gantt’s battalion of Tennessee volunteer cavalry, consisting of a Colt Model 1860 Army revolver, wrought iron bowie knife, and belt rig. The revolver is serial #112697 in .44 Caliber, with an 8" barrel having a very good bore that has some dark pitting within the grooves. The revolver has all-matching numbers, including the wedge and cylinder arbor, with the metal having an overall plum-brown patina with thin, pinprick pitting evenly distributed across the entire surface. The brass trigger guard has a pale yellow-ochre patina with dark brown mottling in spots as well. The walnut grip is worn but is in very good shape overall. Additionally, a visible, but illegible, U.S. inspector’s cartouche is present at the butt on the left side. Also present on the left side is Hanna’s name carved in a neat mixture of block capitals and script: "Jas. R. Hanna." According to Colt records, this revolver was one of 1,000 shipped to the U.S. Arsenal on Governor’s Island, NY, on April 23, 1863, and was captured by Hanna sometime after that. The lock-up and timing are good, and the action is fully functional.

The large bowie knife measures 18 1/4" overall with a 13 5/8" leaf-shaped, double-edged blade, wrought iron blade with a pronounced, square-shaped ricasso. The metal has an overall blue-black patina with a heavily pitted and oxidized surface. The hilt has a tapered walnut grip with the same carved name on the obverse: "Jas. R. Hanna." The grip has no guard or quillons but instead has an oblong iron cap at the ricasso, and a small squared pommel cap with a visible capstan rivet. The knife is fairly crudely made and could be the product of a local blacksmith, or it could well be a repurposed early war Confederate militia pike head. Some Southern states contracted for pikes and spears early on in the war, fearing a shortage of firearms for their volunteer militias. When it became clear that there was no place for such anachronistic weapons on the mid-19th century American battlefield, many were converted into belt knives. The revolver and knife are accompanied by an 1850 pattern officer’s waist belt with US two-piece cast brass American eagle belt plate. The characteristically delicate belt has an old repaired break near the tag end and has both a non-issue type open-top holster and a teardrop-shaped leather pass-through frog for the knife. Both the holster and frog are in very good condition, while the belt has flaking at the edges and some minor crazing in addition to the aforementioned break. An unmarked pistol cartridge box also accompanies the group, as does a captured, U.S.-issued musket cap box with a faint "H.W. OLIVER / PITTSBURGH" maker’s stamp between the belt loops on the reverse. The cap box is in about good condition with crazing of the leather throughout, and the wool lining and vent pick are no longer present. Finally, a small powder measure with a wooden handle is included.

James R. Hanna was a 26-year-old resident of Maury County, TN, when he enlisted in Co. B, 9th Battalion, (Gantt’s) Tennessee Cavalry on November 1, 1862. The 9th Battalion was originally formed in December of 1861 and was assigned to the Western Department under the overall command of Gen. Albert Sidney Johnston. The battalion was commanded by Lt. Col. George Gantt and was part of Nathan Bedford Forrest’s cavalry force during the Battle of Fort Donelson in February of 1862. All but a single company were captured by Grant’s troops and the battalion was held in captivity until exchanged in September 1862. Hanna joined the battalion as it was reconstituted following its release. From then on the battalion conducted operations as a part of the Department of Mississippi and East Louisiana, then the Department of Alabama, Mississippi, and East Louisiana, and finally as part of the Confederate Army of Tennessee. The unit took part in Confederate defensive operations during the Atlanta Campaign, however, James Hanna was shown as "Absent with permission" on June 30, 1864, prior to the fall of the city. No more mention is made of him until May 11, 1865, when he is listed as having formally signed an Oath of Allegiance to the United States of America following the end of the war. This is a splendid lot of items that belonged to a Confederate cavalry trooper and would make a wonderful addition to any collection of Civil War artifacts.