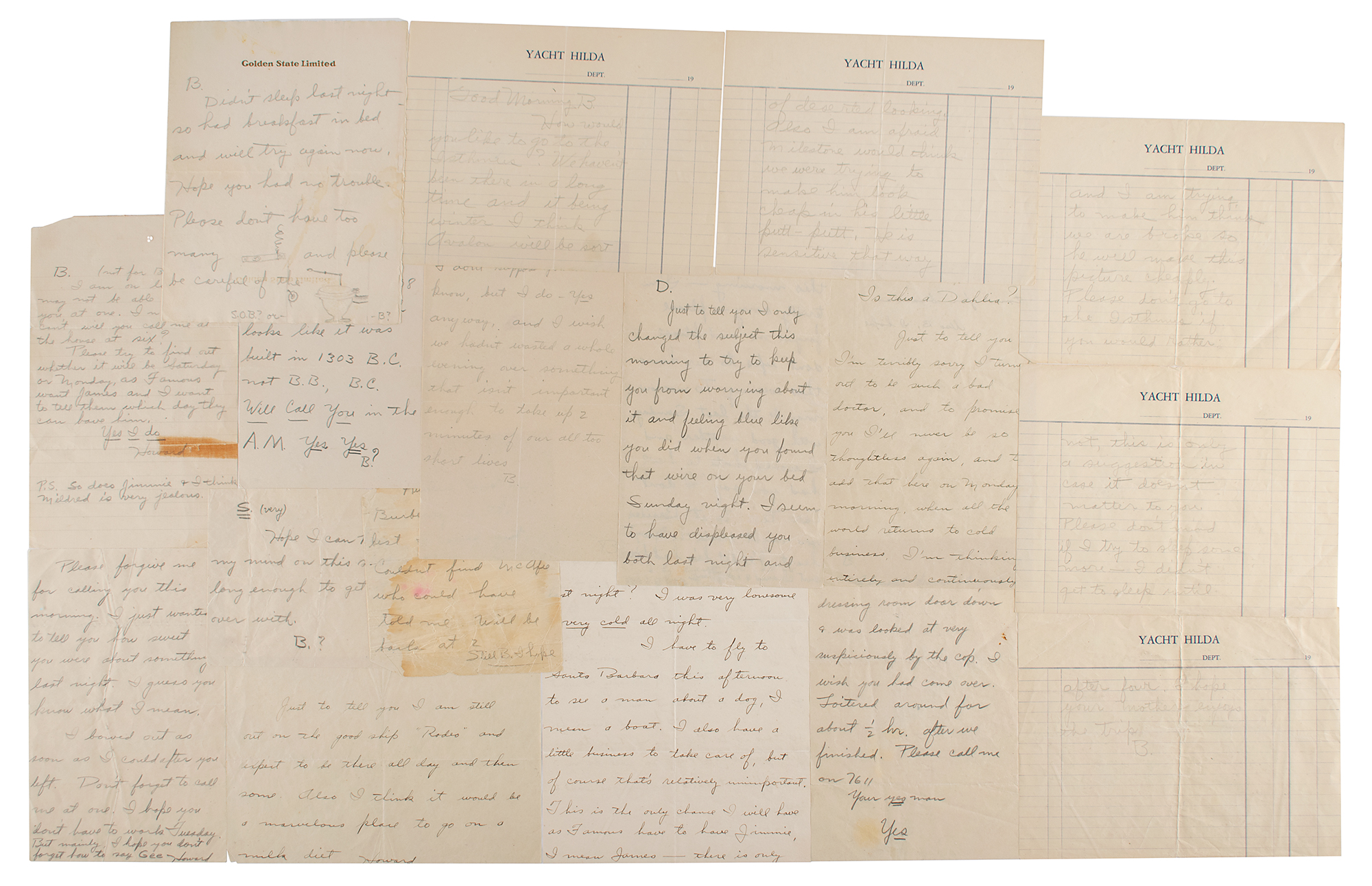 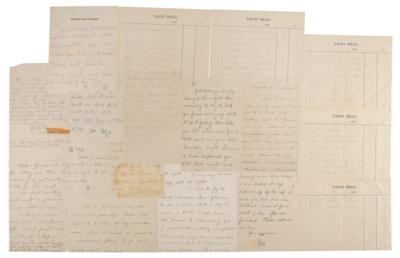 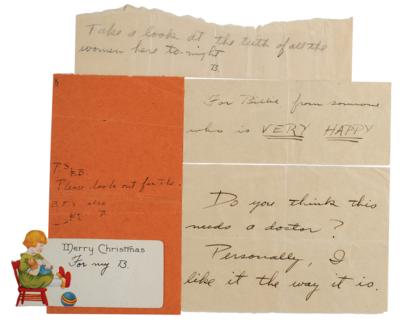 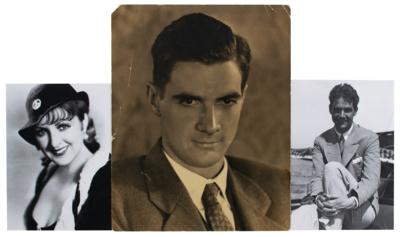 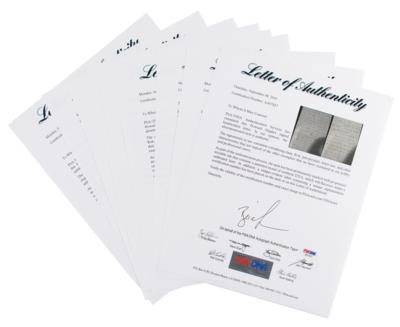 Rare collection of 13 handwritten letters sent by Howard Hughes to his girlfriend, silent screen star Billie Dove, consisting of 19 total pages, ranging in size from 5.5 x 4.75 to 7 x 9.25, none dated but circa 1929 to 1932, with four signed as “Howard,” and the balance signed either as “Yes” or “B.” The majority of the letters are written in pencil, with Hughes addressing the salutation to either “B,” “Bum,” or “D.” Quotidian in nature, the letters offer a glimpse into the tender three-year romance shared between Hughes and Dove, with the former routinely sweet and apologetic, his hectic lifestyle a pointed strain on their relationship and his own health and sleeping habits. Highlights include:

“Almost knocked your dressing room door down & was looked at very suspiciously by the cop. I wish you had come over. Loitered around for about ½ hour after we finished. Please call me on 7611.”

“I don’t suppose you want to know, but I do—Yes, anyway, and I wish we hadn’t wasted a whole evening over something that isn’t important enough to take up 2 minutes of our all too short lives.”

“I only changed the subject this morning to try to keep you from worrying about it and feeling blue like you did when you found that wire on your bed Sunday night. I seem to have displeased you both last night and this morning—I’m terribly sorry—please forgive me and please don’t ups to our home this evening.”

“Just to tell you I’m terribly sorry I turned out to be such a bad doctor, and to promise you I’ll never be so thoughtless again, and to add that here on Monday morning, when all the world returns to cold business, I’m thinking entirely and continuously about B, which does not stand for business.”

“Didn’t sleep last night so had breakfast in bed and will try again now. Hope you had no trouble. Please don’t have too many [Hughes draws a cigarette sketch] and please be careful of the [sketch of a toilet].”

“Just to tell you I am still out on the good ship ‘Rodeo’ and expect to be there all day and then some. Also I think it would be a marvelous place to go on a milk diet.”

“Why didn’t you call me last night? I was very lonesome & very cold all night. I have to fly to Santa Barbara this afternoon to see a man about a dog, I mean a boat. I also have a little business to take care of, but of course that’s relatively unimportant. This is the only chance I will have as Famous have to have Jimmie, I mean James—there is only one Jimmie, and I hope he won’t be lonely Sunday…Naturally I won’t go if you don’t want me to.”

“Please forgive me for calling you this morning. I just wanted to tell you how sweet you were about something last night. I guess you know what I mean…Don’t forget to call me at one. I hope you don’t have to work Tuesday. But mainly, I hope you don’t forget how to say Gee.”

Also included with the correspondence: several pages of handwritten notes in Dove's hand regarding her first meeting with Hughes and other precious memories; five telegrams from Hughes to Dove, dating to 1932 and 1936; an Xmas gift tag annotated by Hughes: “For my B”; a group of four notes penned in Hughes’s hand, including: “Take a look at the teeth of all the women here to-night” and “Do you think this needs a doctor? Personally, I like it the way it is”; a typed poem entitled “I Feel like You Feel”; an unsigned typed letter from Hughes to Dove dated October 17, 1931; an original Xmas card from Hughes; a vintage matte-finish portrait of Hughes; and two original negatives of Hughes on a boat (with matching glossy photos). In overall very good to fine condition. Accompanied by numerous original mailing envelopes, as well as full letters of authenticity from PSA/DNA for all 13 of Hughes’s letters.

One of Hollywood’s biggest stars of the Silent Era, actress Billie Dove (1903-1997) married director Irvin Willat in 1923, and soon thereafter became a household name with films like The Black Pirate (1926), The Marriage Clause (1926), The American Beauty (1927), and The Painted Angel (1929). A 24-year-old Howard Hughes entered the scene at the same time Dove and Willat’s six-year marriage was drawing to a close. Following a chance encounter at the Biltmore Hotel in Los Angeles, and despite both being married, Hughes and Dove began a passionate three-year affair that became the talk of Hollywood. Reportedly, Hughes paid off his wife Ella with a $1.25 million divorce settlement, bought Dove’s contract from First National Pictures, and then paid Willat the sum of $325,000 in $1,000 bills to divorce Dove. Despite both now being free to marry, Hughes and Dove’s relationship never went any further, and they eventually parted ways in 1932.