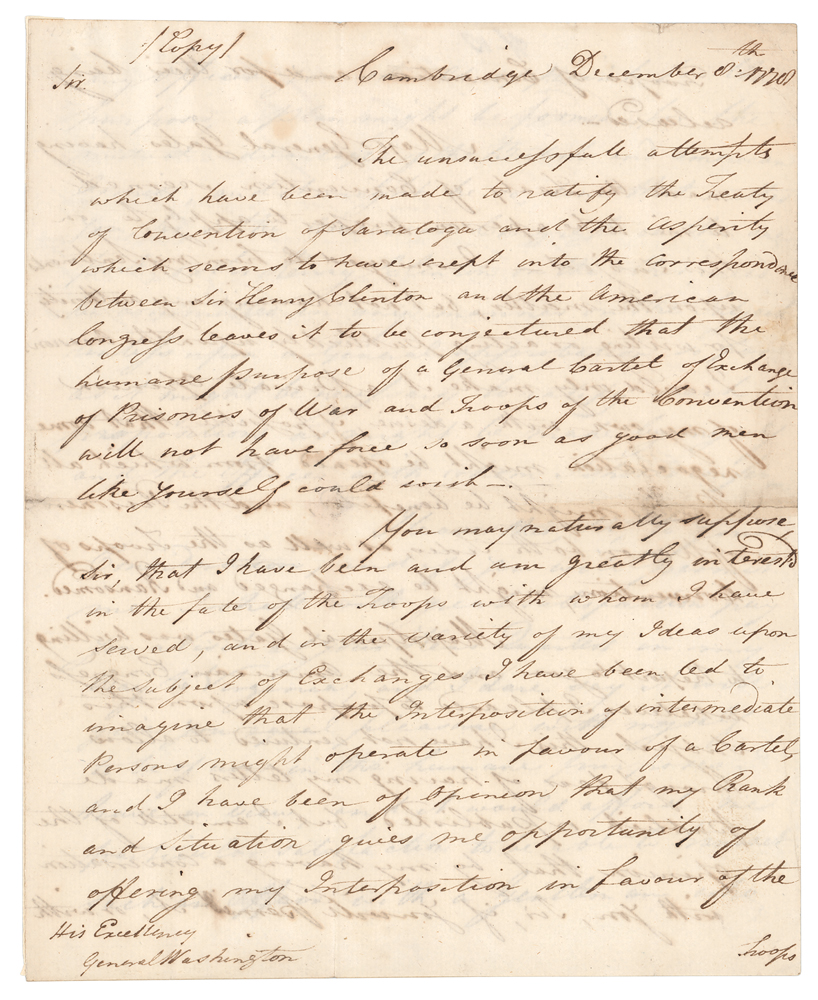 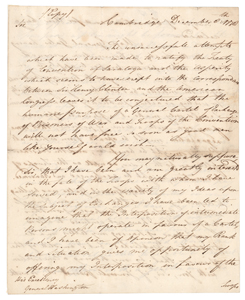 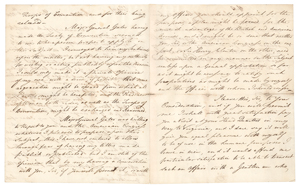 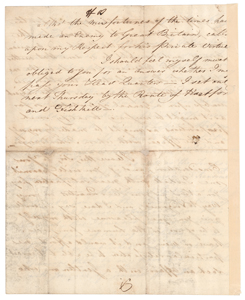 Contemporary copy of a letter to General George Washington, likely in the hand of British Commander-in-Chief Sir Henry Clinton's aide William Collier, four pages on two adjoining sheets, 7.25 x 9, December 8, 1778. A letter proposing a secret plan to meet and negotiate a prisoner exchange. In full: "The unsuccessful attempts which have been made to ratify the Treaty of Convention of Saratoga and the Asperity which seems to have crept into the Correspondence between Sir Henry Clinton and the American Congress leaves it to be conjectured that the humane purpose of a General Cartel of Exchange of Prisoners of War and Troops of the Convention will not have force so soon as good men like yourself could wish.

You may naturally suppose, Sir, that I have been and am greatly interested in the fate of the Troops with whom I have served, and in the vanity of my ideas upon the subject of Exchanges I have been led to imagine that the interposition of intermediate Persons might operate in favor of a Cartel and I have been of opinion that my Rank and Situation gives me opportunity of offering my Interpretation in Favour of the Troops of Convention and for their being released.

Major General Gates having made the Treaty of Convention seemed to me to be a person proper to apply to on this subject. I conveyed to him my sentiments upon the matter, but not having any authority for writing or acting publicly upon the occasion, I could only make a Private Opinion of my own, if possible, that some negotiation might be opened from which all Parties might be benefited, and the Prisoners of War on both sides, as well as the Troops of Convention, might be exchanged and Ransomed.

Major General Gates was willing to report to you and the American Congress whatever I pleased to propose upon this subject, this I have not ventured to allow through fear of having my letters made public or published, but I am still of the opinion that by my having a conversation with you, Sir, if you will permit it, or with an officer you should appoint for the purpose, a plan might be formed for the mutual advantage of the British and American Armies, and it might be done so that neither you, Sir, or the American Congress on the one part, or Sir Henry Clinton on the other, need be committed in any manner on the subject unless upon a General approbation so far as it might be necessary to ratify such propositions as might be made by myself and the Officers with whom I should confer.

I leave this, Sir, to your consideration, and if you will permit me I shall with great satisfaction pay a Visit at your Head Quarters in my way to Virginia, and I dare say it will give you equal pleasure with myself to be of use in the human purposes I have in view, and it would afford me particular satisfaction to be able to transact such an affair with a Gentleman who, altho' the misfortunes of the times has made an enemy to Great Britain, calls upon my Respect for his private virtue. I should feel myself much obliged to you for an answer whether I may pass your Great Quarters—I set out next Thursday by the Route of Hartford and Fishkill." The letter is marked, "His Excellency General Washington," in the lower left of the first page. In fine condition, with a strip of mounting tape along the edge of the last page, and writing showing through from opposing sides. The treaty negotiated with Horatio Gates following Burgoyne's surrender at Saratoga would have allowed the captured troops to return home to Great Britain on the condition that they remain there. Washington, along with the Continental Congress, believed that soldiers would violate the terms of this parole and return to battle. Congress revoked the agreement and held the so-called 'Convention Army' as prisoners of war until 1783, with the exception of a few specific officer exchanges. An interesting letter offering tremendous historical insight.