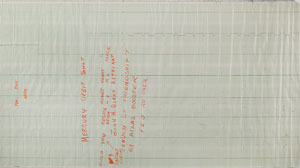 Extraordinary original EKG-style readout that monitored Pilot John Glenn's heartbeat, respiration, and spacecraft forces at Cape Canaveral during his Mercury-Atlas 6 flight aboard the Friendship 7 on February 20, 1962, measuring approximately 106″ x 16″ (about 9 feet by 1 and 1/3 feet), contemporaneously annotated at the bottom in orange crayon: "Mercury Orbit Shot…John Glenn Astronat [sic], Launch of Friendship 7 by Atlas Booster, Feb 20, 1962." The five lines track the capsule forces "Pitch" and "Yaw," "Respiration," "Heart (LV)," "Heart (RV)," and "G Force." The course of the readout bears annotations during the launch which indicate the time and key events, ranging from "T-18 sec from Launch" to "Payload Separates from Atlas." In between these are the flight's milestones: "Booster Engines Cut Off," "Booster Section Dropped Off 1st Stage," "Sustainer Engine Shut Off," and "Vernier Engines Shut Off." Rolled and in very good condition, with scattered creasing, a few tears, and larger areas of loss to the fragile paper which have been professionally restored and reinforced. Original documents from the Mercury Program are extremely rare.

The consignor notes: "The owner's maternal uncle, Jack Farris, was a technician at NASA during launch. He lived in a town called Rockledge, FL, at the time. During the launch, as paper bunched in the printer, someone tore it out of the printer and threw it out. Jack saved it and later gave it to his sister, Julie (nee Farris) Bennett, who passed it on to her daughter, Janice (Bennett) Molinelli. The owner remembers taking it to grade school for a ‘show and tell.’ She remembers their cat jumping on the document and tearing it (cause of the tears)."

This remarkable, one-of-a-kind document chronicles the launch of America's first orbital spaceflight in a tangible manner. Astronaut John Glenn's pulse rose to a relatively modest 110 beats per minute at launch. As the spacecraft passed through max q—maximum dynamic pressure—the point at which the airframe undergoes maximum mechanical stress—Glenn reported, 'It's a little bumpy about here.' This 'bumpiness' is witnessed in the jagged peaks and valleys on this chart, as the mission's elapsed time passes from around "+60 Sec" to "+120 Sec." After reaching max q, the flight smoothed out, and at 2 minutes and 14 seconds after launch, the booster engines cut off and dropped away—as annotated in the right margin of this chart. Three minutes later, the payload—Glenn's Friendship 7 capsule—separated from the Atlas and was inserted into Earth orbit. Glenn made three successful orbits of Earth before safely splashing down in the North Atlantic.