Spectacular correspondence from Jackie to her interior designer 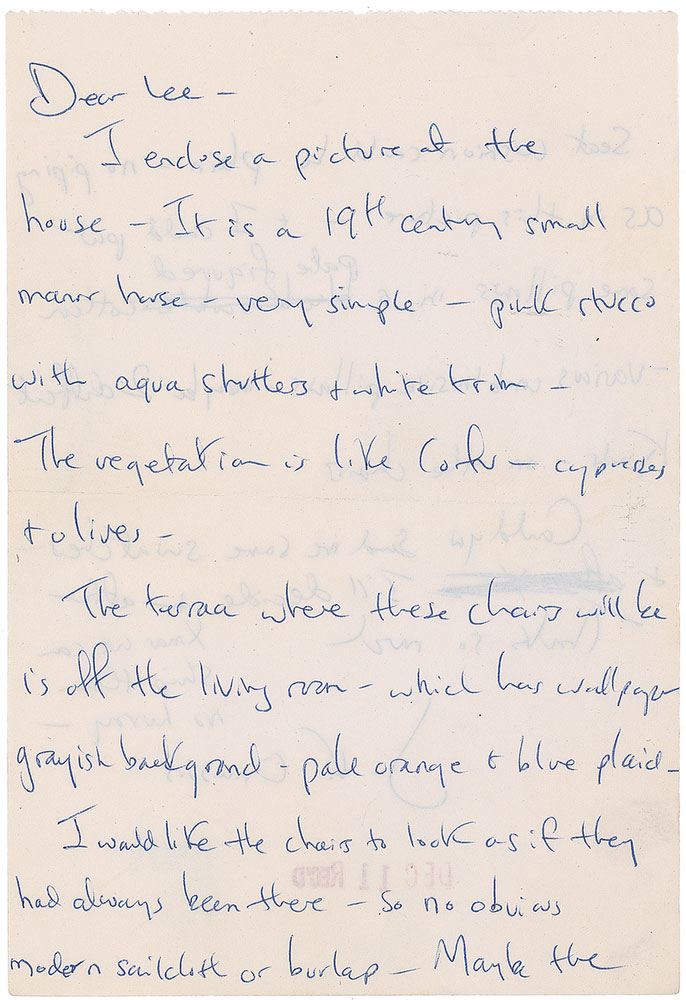 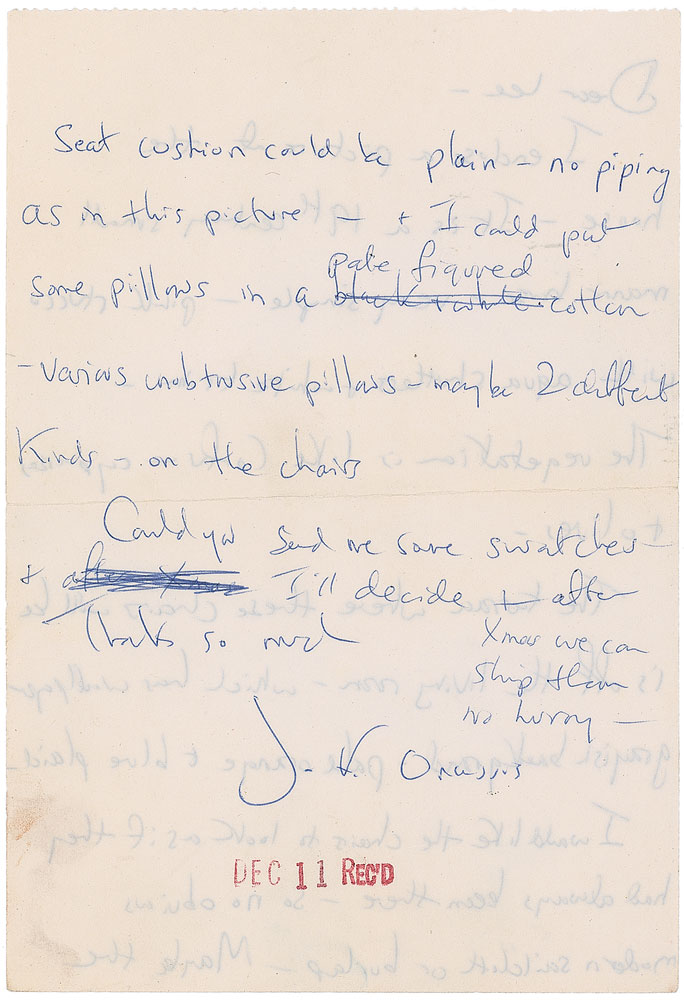 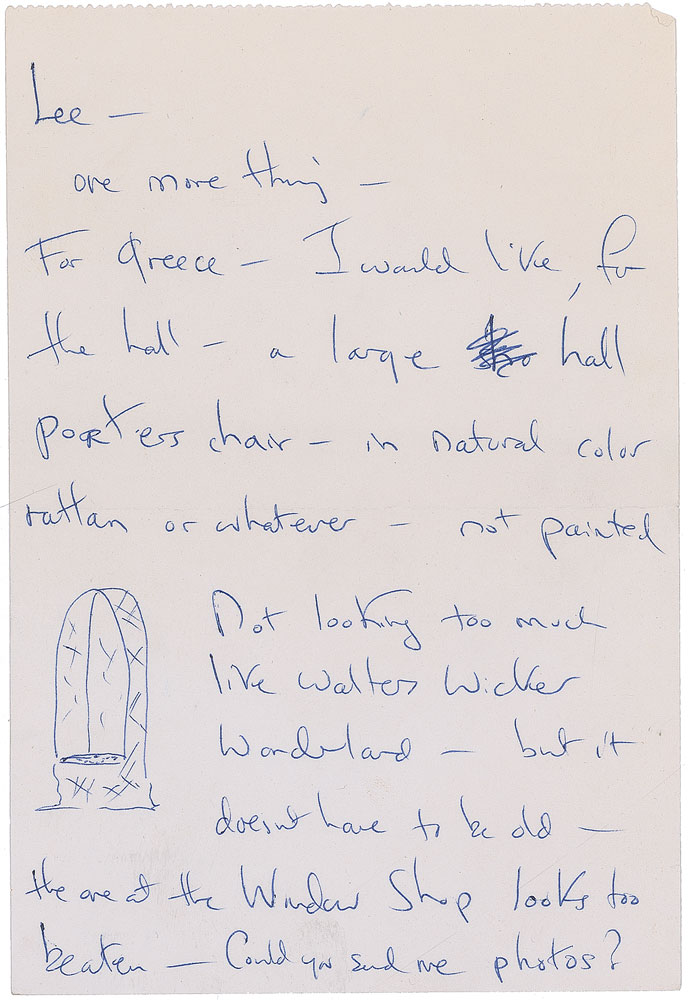 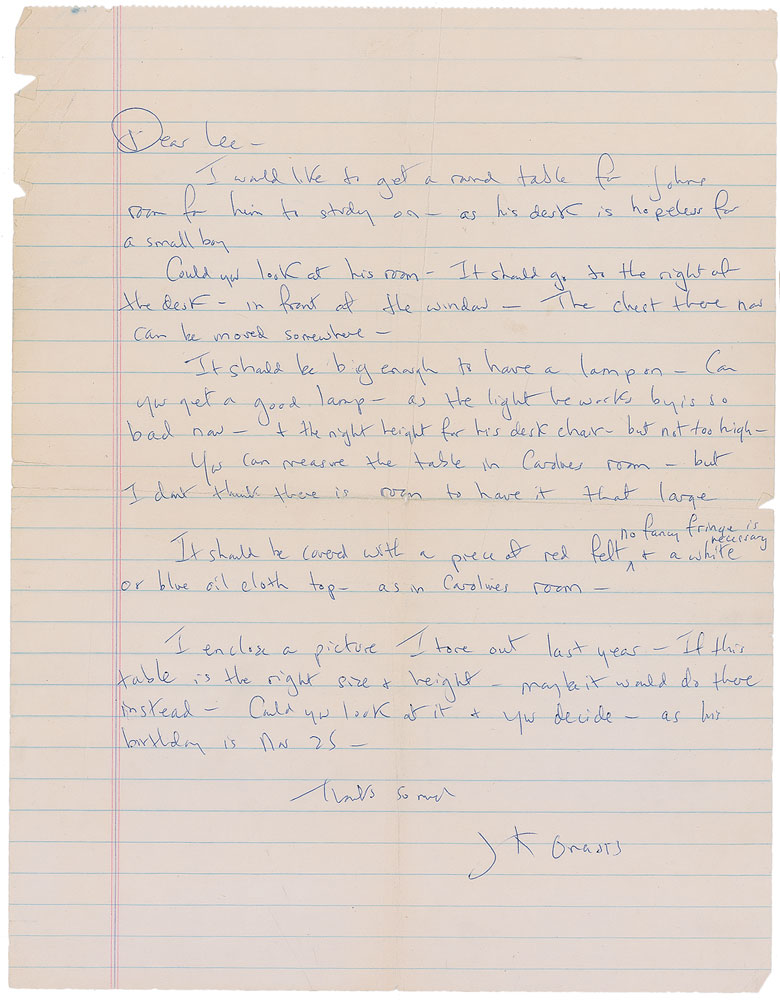 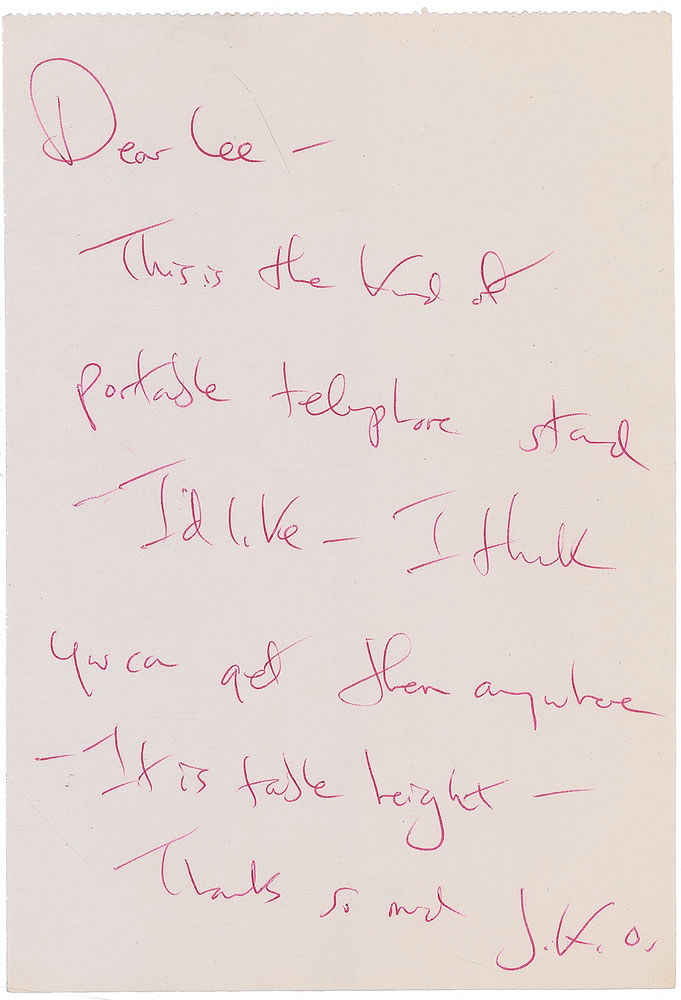 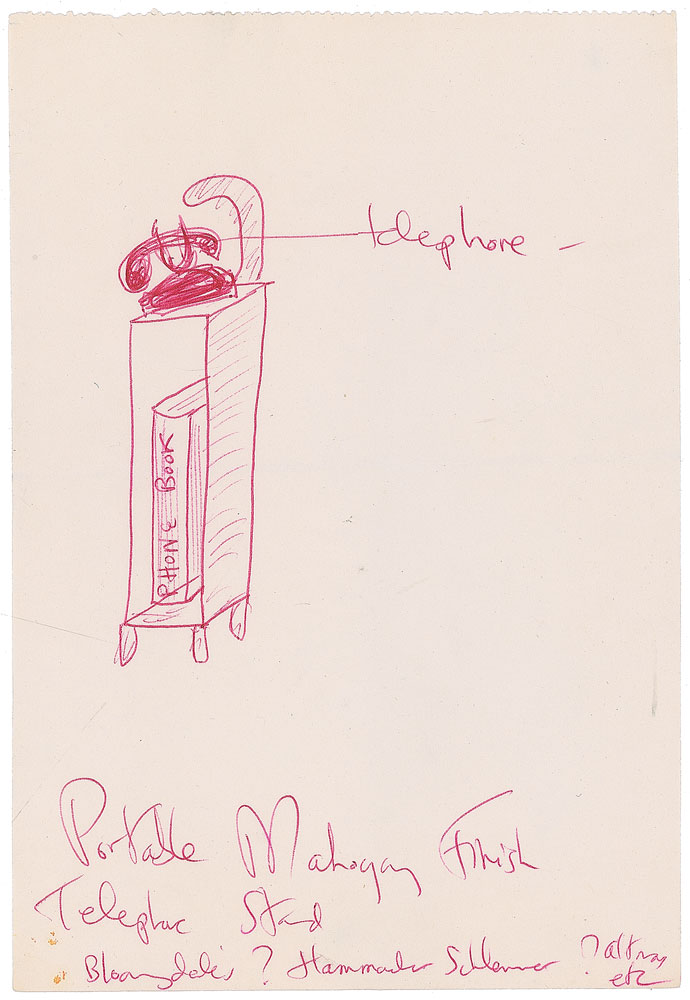 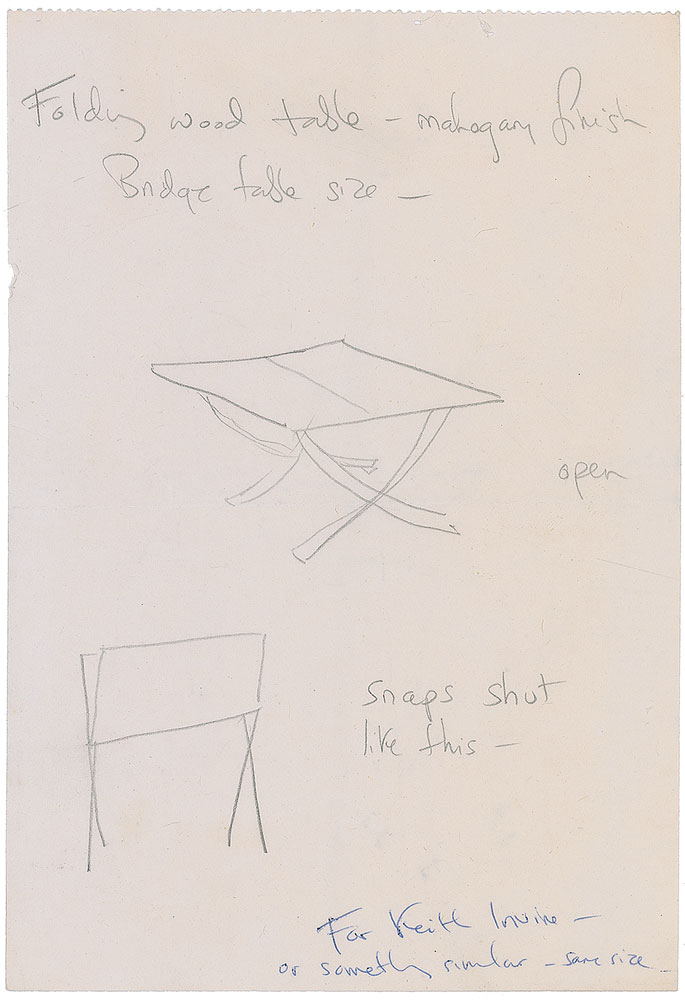 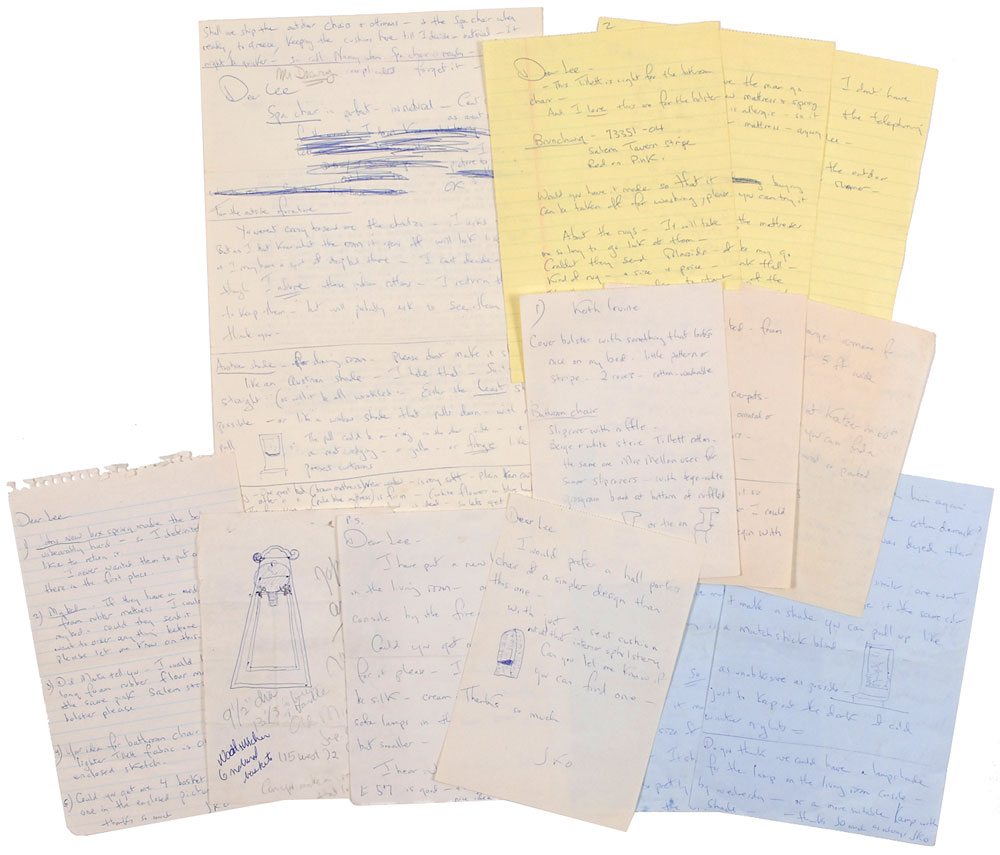 Spectacular correspondence from Jackie to her interior designer

Amazing archive of correspondence from Jacqueline Kennedy Onassis to Lee Onthank Barrett, her interior designer, including 12 handwritten letters, some with well-done sketches of her own ideas, undated but spanning about 1968 to 1970. One is signed "Jacqueline Onassis," two signed "J. K. Onassis," six signed "J. K. O.," and three unsigned. A selection of the most interesting letters as follows:

A two-page ALS describing a desired piece of furniture and enclosing a conceptual sketch, in full: "This is the kind of portable telephone stand I'd like—I think you can get them anywhere—It is table height." On the second page, Kennedy draws a detailed sketch of the design: a thin stand with the telephone set on top and cubby for a phone book below, which she captions: "Portable Mahogany Finish Telephone Stand. Bloomingdale's? Hammacher Schlemmer?" The fine sketch Jackie includes demonstrates her artistic skill, and she was truly an artist at heart—her first professional job was as a photojournalist, she painted, sketched, wrote poetry, and of course had a renowned eye for fashion.

A lengthy one-page ALS about redecorating her children's rooms, in part: "I would like to get a round table for John's room for him to study on—as his desk is hopeless for a small boy…It should be big enough to have a lamp on—can you get a good lamp—as the light he works by is so bad now—& the right height for his desk chair—but not too high—You can measure the table in Caroline's room—but I don't think there is room to have it that large. It should be covered with a piece of red felt, no fancy fringe is necessary, & a white or blue oil cloth top—as in Caroline's room."

A two-page ALS regarding 'The Pink House' on Skorpios, in part: "I enclose a picture of the house—It is a 19th century small manor house—very simple—pink stucco with aqua shutters & white trim…The terrace where the chairs will be is off the living room—which has wallpaper grayish background—pale orange & blue plaid—I would like the chairs to look as if they had always been there—so no obvious modern sailcloth or burlap." Skorpios was the private island owned by Aristotle Onassis and where he and Jackie had their wedding. The pink villa was built especially for her and offered an amazing view of the island’s coast from the living room.

Two one-page letters include descriptions and small sketches of a chair she wants for the Pink House. One, in part: "For Greece—I would like for the hall—a large hall porters chair—in natural color rattan or whatever—not painted. Not looking too much like Walter Wicker Wonderland—but it doesn't have to be old."

In a three-page ALS she describes the qualities of new mattresses she is seeking for herself and John, Jr., in part: "Mattresses—Will you please have the man go ahead & make new mattress & spring for John. He is allergic—so it must be foam rubber mattress—anyway not feathers & wood. My mattress—The trouble is buying a mattress—before you can try it out. Can I try one of the mattresses your man suggests?" She continues discussing the beds in a couple additional letters, as well as designs for chairs and window shades, a pattern for a quilt, and various related subjects. Also included are two pages of sketches: one with two pencil sketches by Kennedy of design for a table she would like; and the other with a ballpoint sketch of a mirror, possibly drawn by Kennedy, described by Kennedy in pencil below.

In overall very good to fine condition. Accompanied by seven original transmittal envelopes addressed in Kennedy's own hand. This is an amazing collection related to Jacqueline Kennedy's status as an international style icon, known for her fashionable elegance and tasteful decorating sensibilities. After leaving the White House she worked with Lee Onthank Barrett, a valued associate with the internationally renowned Manhattan interior design firm Keith Irvine and Thomas Fleming, Inc., who helped her to maintain the glamorous, upscale lifestyle and surroundings that she had become accustomed to. In addition to working for Jackie, Barrett worked on projects for other family members such as Ted and Joan Kennedy, Patricia [Kennedy] Lawford, Eunice and Sargent Shriver, and Jean and Stephen Smith. These letters present a wonderful inside look at Kennedy's thoughtful process in decorating, giving a sense of her wants, needs, and stylistic values. Her artistic abilities are also on display in the sketches she provides to Barrett of various types of furniture. This archive is unlike any we have encountered and offers an excellent portrayal of Jackie O.'s refined sense of design, one of her lasting American legacies. RR Auction COA.