Exceedingly rare summons signed as sheriff, Masterson compels a man to appear in "Dodge City on the 16th day of May 1878" 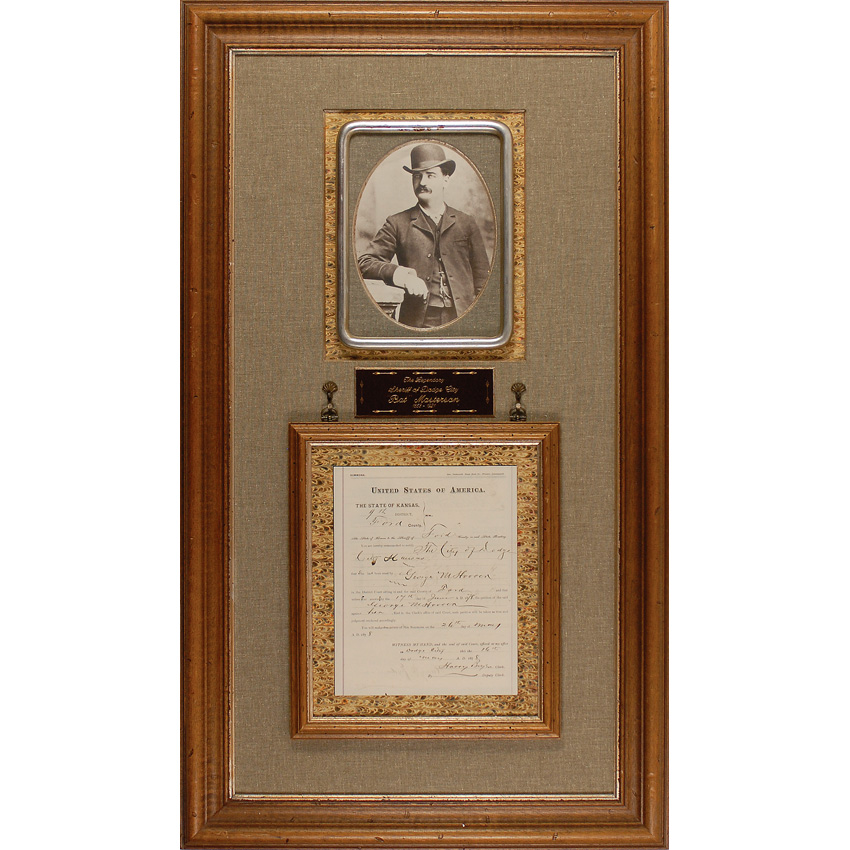 Exceedingly rare summons signed as sheriff, Masterson compels a man to appear in "Dodge City on the 16th day of May 1878"

Rare partly-printed DS, signed “W. B. Masterson,” one page both sides, 8 x 10, May 16, 1878. Summons to Dodge City reads, in part: “The State of Kansas to the Sheriff of Ford County…You are hereby commanded to notify The City of Dodge City Kansas that she has been sued by George M. Hoover.” Reverse bears an endorsement which reads, “As commanded by this writ, I summoned the within named City of Dodge City on the 16th day of May 1878, by delivering to E. F. Colburn to clerk of said city a certified copy of the within Summons and of the indorsement thereon.” Signed at the conclusion by Masterson as Sheriff, with a charge of $65 noted to the left of his signature, Further notation at the bottom states “Suit brought for recovery of damages; amount claimed $600.” Matted and framed, so both sides may be viewed, to an overall size of 11.5 x 14. The frame, in turn hooks onto a framed display with a portrait of Masterson, a name plaque, and a printed biography, to an overall size of 21.5 x 37.5. A central vertical fold, two horizontal folds, scattered light toning, and slight show-through from writing on reverse, otherwise fine condition.

At the request of Chief Deputy Marshal Wyatt Earp, Bat Masterson arrived in Dodge City in 1877 to help gain control of the lawless, gunslinging cowboys and buffalo hunters that gave the city its reputation as ‘Hell on the plains.’ He joined his two brothers on the force, taking a position as a sheriff’s deputy. Within a few months, he was elected Sheriff of Ford County. Though he received great recognition for his actions as Sheriff, he remained quick to draw and responded with deadly force on the turn of a dime. A month before signing this summons, Masterson’s brother Ed, Marshal of Dodge City, was shot and killed in the line of duty; Bat watched from across the street and immediately opened fire on the shooter and his boss, killing one and severely injuring the other. This incident marked the beginning of the end for the group of famous Dodge City lawmen. Bat was voted out of office in 1879 and headed west, making a living as a drifting gambler once again before joining Earp and Holliday in their new lives in Tombstone.

This incredibly rare document, signed during his brief period as sheriff, marks the height of Dodge City’s legendary history. It captures an illustrious time in which the core figures of America’s Old West – Wyatt and James Earp, all three of the Masterson brothers, Doc Holliday and Big Nose Kate – could all be found in one rough-and-tumble city.