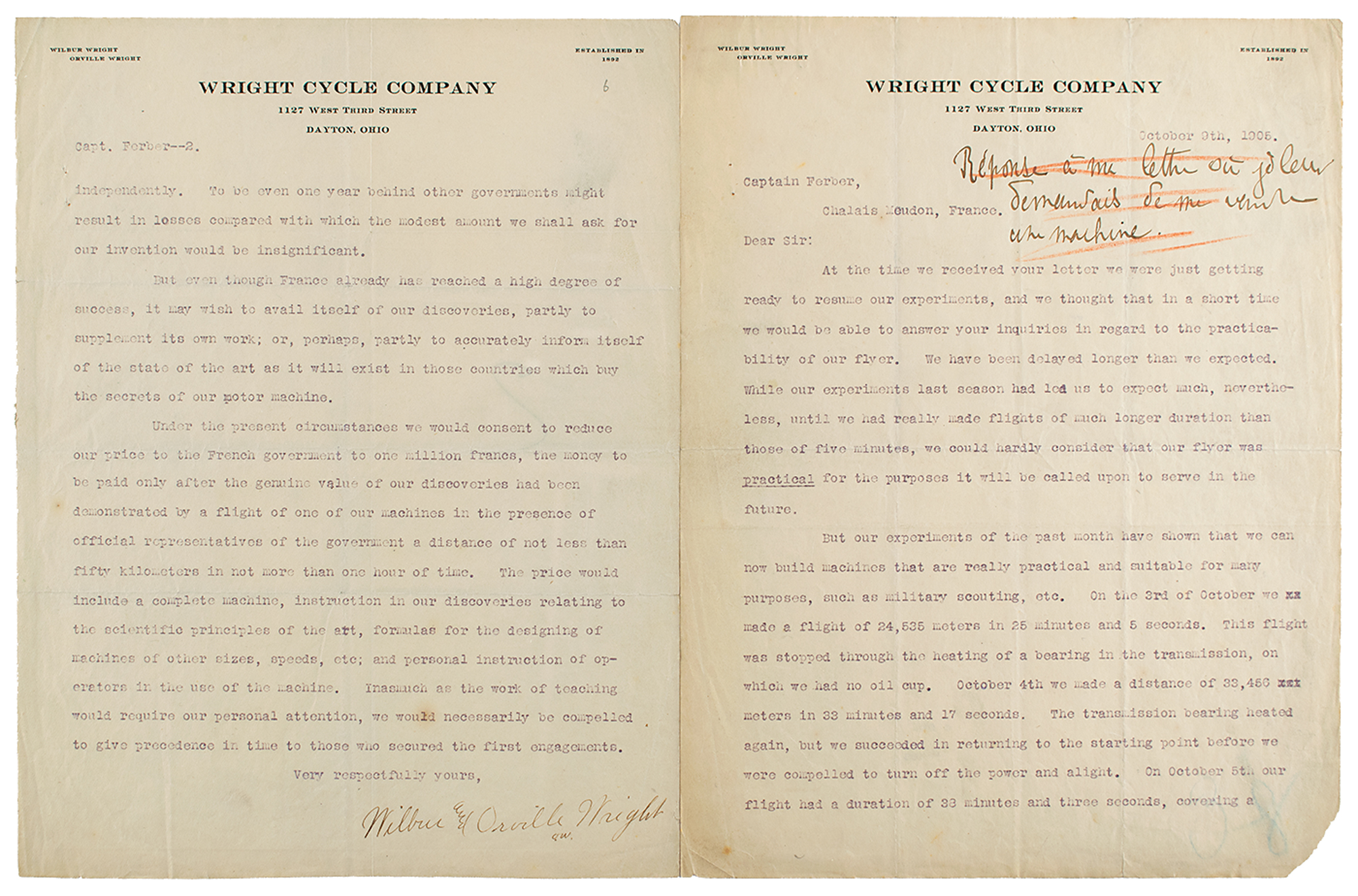 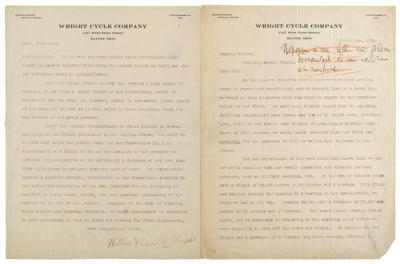 Partial TLS signed for both by Orville, "Wilbur & Orville Wright, O. W.,” one page, 8.5 x 11, Wright Cycle Company letterhead, [November 4, 1905]. The concluding page of a two-page letter to renowned French aviation pioneer Captain Ferdinand Ferber, in full: "…independently. To be even one year behind other governments might result in losses compared with which the modest amount we shall ask for our invention would be insignificant. But even through France already has reached a high degree of success, it may wish to avail itself of our discoveries, partly to supplement its own work; or, perhaps, partly to accurately inform itself of the state of the art as it will exist in those countries which buy the secrets of our motor machine. Under the present circumstances we would consent to reduce our price to the French government to one million francs, the money to be paid only after the genuine value of our discoveries has been demonstrated by a flight of one of our machines in the presence of official representatives of the government a distance of not less than fifty kilometers in not more than one hour of time. The price would include a complete machine, instruction in our discoveries relating to the scientific principles of the art, formulas for the designing of machines of other sizes, speeds, etc; and personal instruction of operators in the use of the machine. Inasmuch as the work of teaching would require our personal attention, we would necessarily be compelled to give precedence in time to those who secured the first engagements."

Also includes the unsigned first page of a letter from the Wrights to Ferber from one month earlier, dated October 9, 1905, which also contains exceptional aviation content, in full: “At the time we received your letter we were just getting ready to resume our experiments, and we thought that in a short time we would be able to answer your inquiries in regard to the practicability of our flyer. We have been delayed longer than we expected. While our experiments last season had led us to expect much, nevertheless, until we had really made flights of much longer duration than those of five minutes, we could hardly consider that our flyer was practical for the purposes it will be called upon to serve in the future.

But our experiments of the past month have shown that we can now build machines that are really practical and suitable for many purposes, such as military scouting, etc. On the 3rd of October we made a flight of 24,535 meters in 25 minutes and 5 seconds. This flight was stopped through the heating of a bearing in the transmission, on which we had no oil cup. October 4th we made a distance of 33,450 meters in 33 minutes and 17 seconds. The transmission bearing heated again, but we succeeded in returning to the starting point before we were compelled to turn off the power and alight. On October 5th our flight had a duration of 38 minutes and 3 seconds, covering a…” In very good to fine condition, with light creasing, intersecting folds, and loss to the lower right corner of the first page. Ferber was an officer in the French Army who—despite the fact that his own attempts at building aircraft were largely unsuccessful—proved to be a major influence in the development of aviation in France by publicizing the work of the Wright Brothers and raising public interest in manned flight. Ferber had written to the Wrights in May of 1905 to request details about purchasing one of their machines; still conducting tests on the flyer at that time, they were not yet prepared to discuss their plans for production and sales. At the time of this letter just six months later, the brothers were beginning negotiations with the United States, British, and French governments regarding a contract for military airplanes. An incredible letter from a supremely important time in the history of flight.

The 'second halves' of these letters were sold in 2014, and can be read in our past auction database at https://www.rrauction.com/PastAuctionItem/3334295