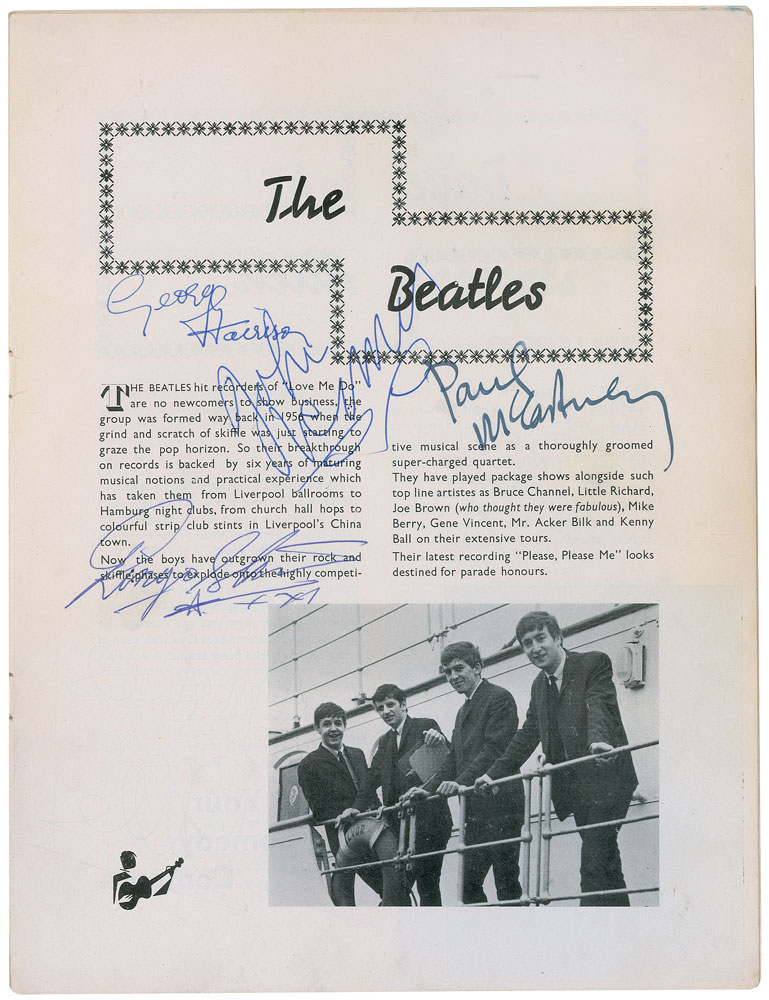 Very rare program for the Beatles’ first nationwide tour of the United Kingdom, headlined by Helen Shapiro, February 2–March 3, 1963, 8 x 10.5, signed inside in blue ballpoint and fountain pen by John Lennon, Paul McCartney, George Harrison, and Ringo Starr. Also signed on the front cover by Helen Shapiro, and inside by Danny Williams, Kenny Lynch, and Dave Allen. Scattered creases, otherwise fine condition. Accompanied by a letter of authenticity from noted Beatles expert Frank Caiazzo, in part: “These signatures date precisely from the time of this tour, and in fact this program was signed by the Beatles on February 7, backstage following the evening show at the Regal Cinema, Wakefield in Yorkshire, England....This was an exciting time for the Beatles, as they were beginning to build some great momentum while touring throughout Great Britain for the first time and their first album ‘Please Please Me’ was recorded 9 days after the tour commenced. This is one of the best examples of this extremely rare signed program in existence.”

This was the Fab Four’s very first UK nationwide tour, and they were fourth on an eleven-act bill headed by the 16-year-old Londoner Helen Shapiro. The set list for this tour was a selection of very early songs as follows: ‘Chains’, ‘Keep Your Hands Off My Baby’, ‘A Taste of Honey’, ‘Please, Please Me’, ‘Love Me Do’, and ‘Beautiful Dreamer’. They left the tour on February 10, and in one marathon day recorded most of their first album Please Please Me at Abbey Road. During the day of recording on February 11, the group missed performing in Peterborough, a venue which they had already played in December 1962—at Brian Epstein’s request for a nationwide tour, promoter Arthur Howes had them backing Frank Ifield to less than stellar reviews. Fortunately, this led to Howes placing them in the more suitable, Helen Shapiro headlined, pop hit tour early in the following year. Within three months of Please Please Me’s release on March 22, 1963, the Beatles were touring with Roy Orbison and launched into international stardom. This is an excessively rare program in itself, and thus incredibly desirable as a fully signed, uninscribed piece of Beatles memorabilia from a critical turning point in music history.