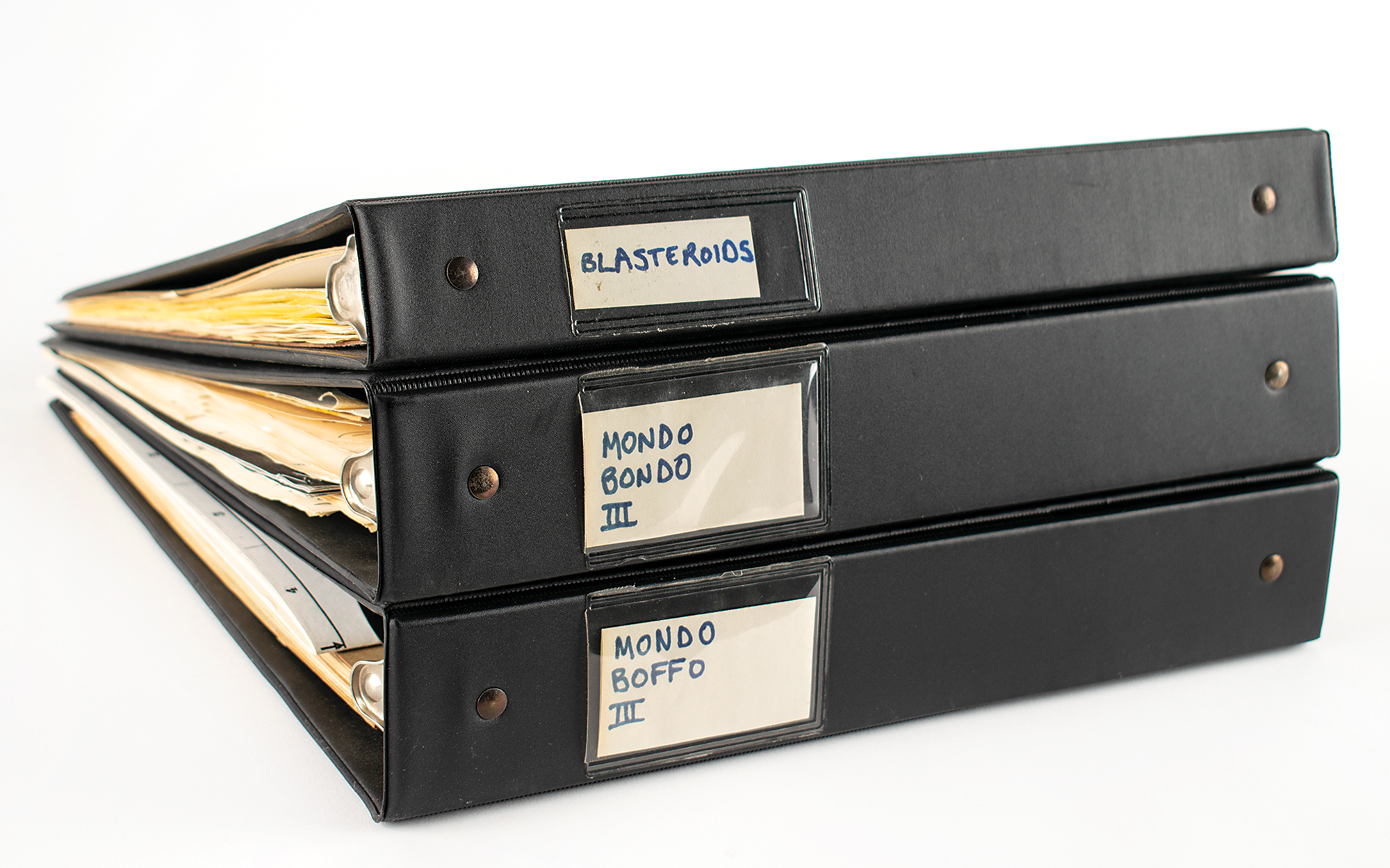 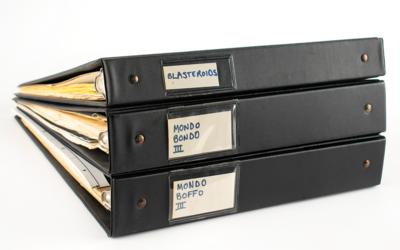 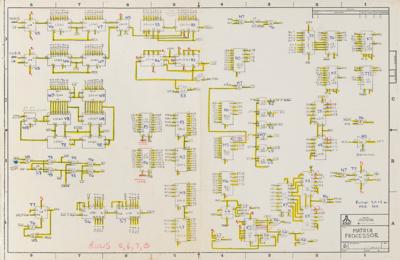 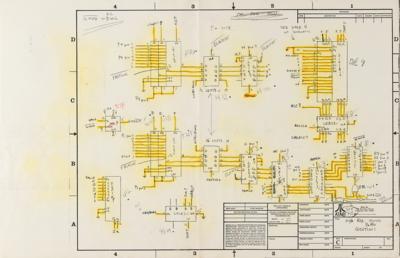 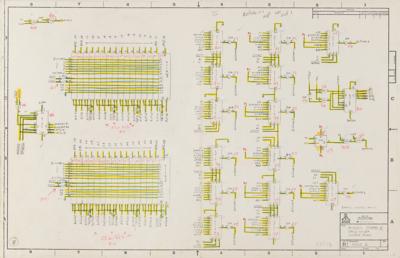 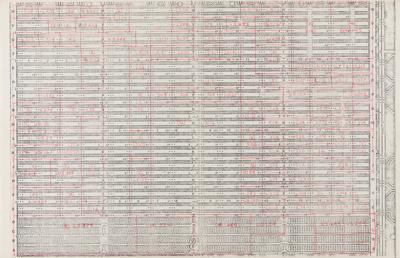 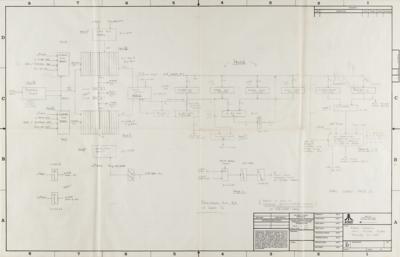 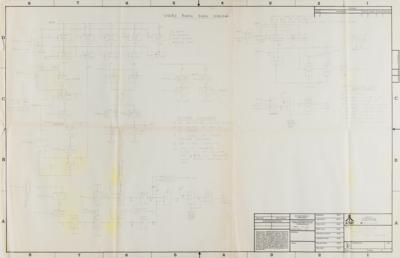 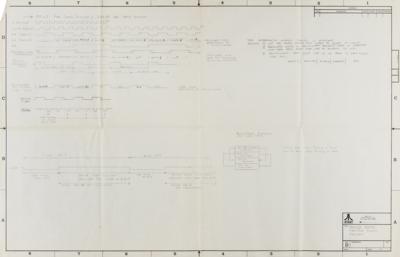 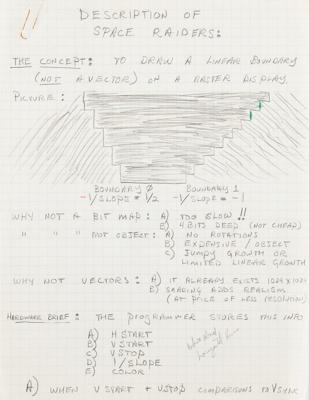 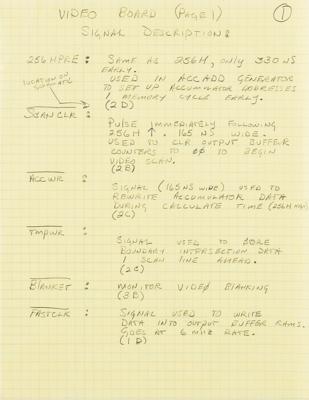 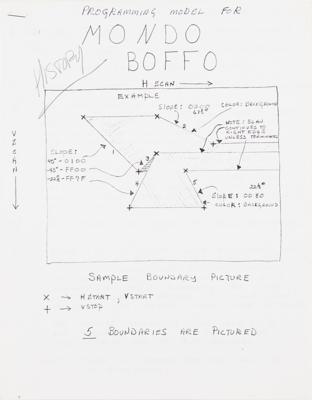 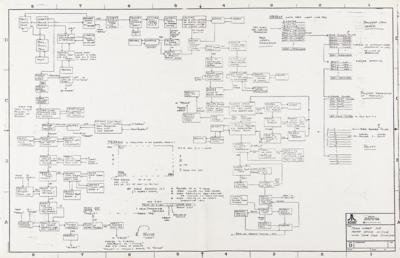 Extensive archive of development material related to the Atari, Inc. video processor project ‘Mondo Boffo’ and the 3-D processor project ‘Mondo Bondo,’ deriving from the personal collection of hardware designer David Sherman, who worked on these processors between 1980 and 1983 during Atari’s graphical evolution. The archive, which contains an abundance of schematics and hand-annotated worksheets and diagrams that Sherman used to lay the programming foundation for Atari games like Space Raiders, Blasteroids, and I, Robot, has been divided into the following bundles and binders:

A “Mondo Boffo” hardware bundle file:
- A 5-page programming model packet for Mondo Boffo, featuring basic features distributed to a few programmers for comment; a simple write-up of accumulated boundary coordinates to delineate color regions
- An 11-page handwritten “Description of Space Raiders” packet, which Sherman recalls: ‘An original for an earlier version of the idea attached to a simple game idea called Space Raiders. I think the game was a first-person ‘Asteroids’ idea on a raster screen, so the extremely limited hardware could have been justified. The idea was dropped even though the game idea lived on and was used in some documentation.’
- Schematics for simple proposed “Test Patterns”
- A large vellum hand-drawn schematic marked “Mondo Boffo, Master Timing Diagram”
- A large vellum hand-drawn schematic marked “Block Diagram, Mondo Boffo, Alias ‘Space Raiders’”

Three-ring binder marked “Mondo Bondo III,” which contains the very first version of the 2901-based Mondo Bondo design with 265-x rams in the place of the u-code rooms, which allowed the new debug code to be quickly downloaded for the initial bring-up. Includes numerous hand-edited schematics and notebook pages. According to Sherman: ‘We expanded the depth as went to avoid a new wire wrap debug effort by simply pulling CE chip enables from rams soldered and stacked on top of each other to fit into the existing wire wrap sockets to get 512 and 1K depths. This schematic was ‘cobbled together’ from the Blasteroids schematic, new schematics designated Mondo Bondo III, and new development ram schematics simply called ‘Math Box Development Rams.’

Three-ring binder marked “Mondo Boffo III,” containing sundry hand-annotated schematics, diagrams, and programming instructions. According to Sherman: ‘This binder is still the 16K drams design (Mondo Boffo II). I believe it was labeled Mondo Boffo III because it was a new wire wrap board to support the bring-up of the Mondo Bondo III 3-D math processor. At the time, that eliminated confusion so techs and myself knew which wire wrap was which since the development was occurring with an overlap in time. The actual 65K dram system (actual Mondo Boffo III) first development schematics have not survived; surviving documents are of the first PCB set.’

Three-ring binder marked as “Blasteroids,” which was a very early code name for the hardware that was attached to a proposed first-person ‘Asteroids’ game on a raster display. The binder contains hand-drawn wire wrap instructions, as well as instructions and diagrams for an edge connection wiring harness. Sherman notes that this ‘probably does not match up with any existing wire wrap schematic.’ In overall fine condition.