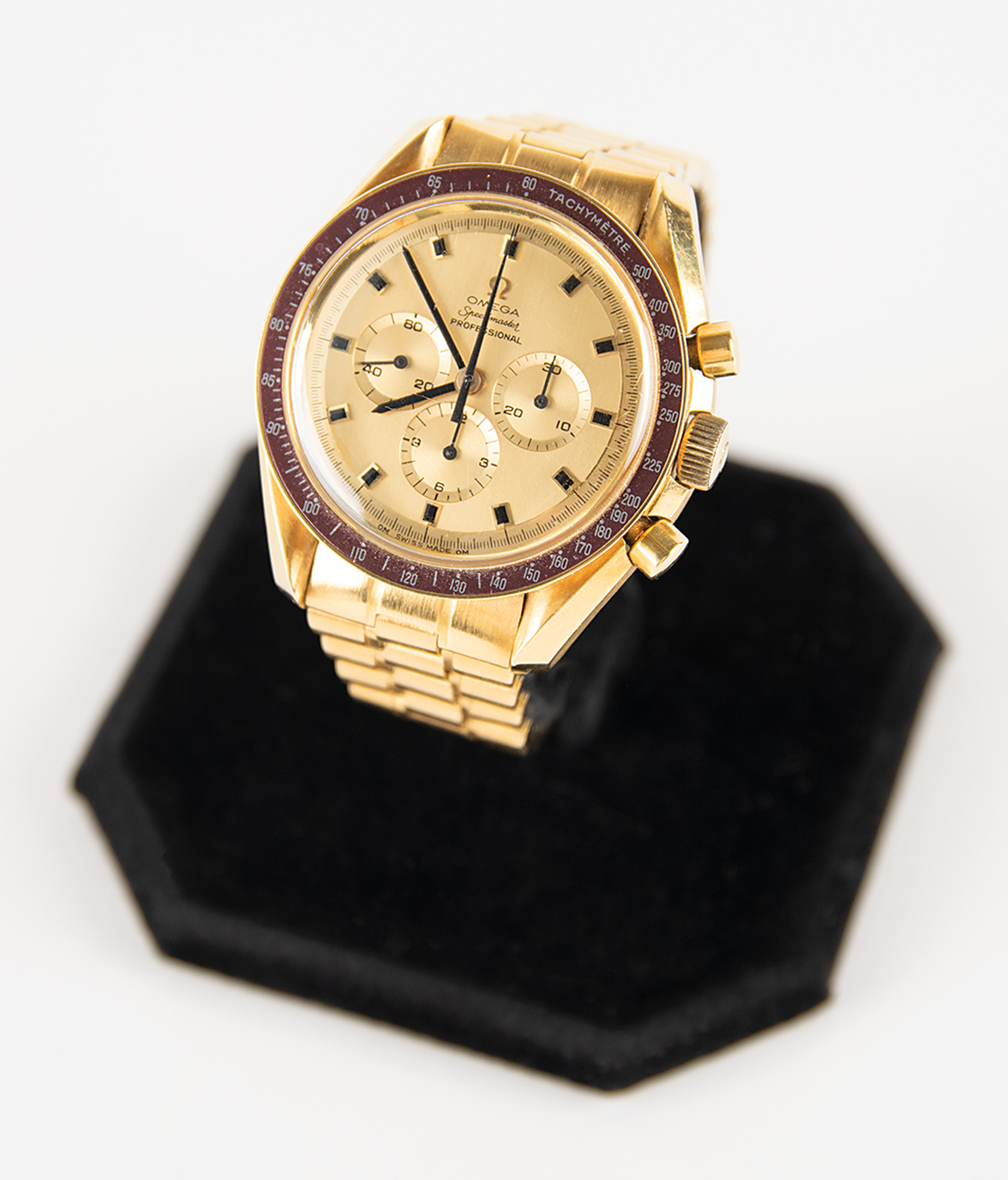 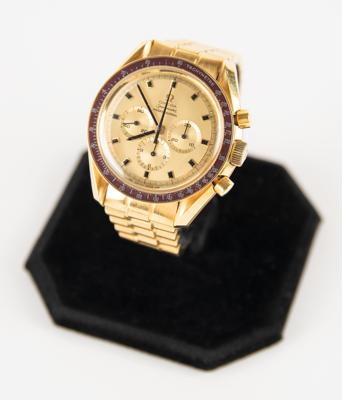 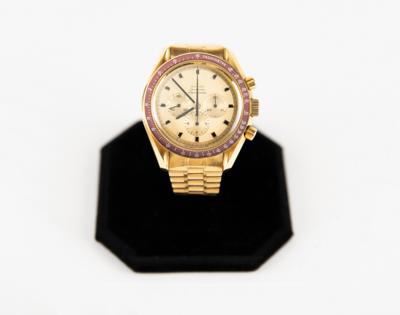 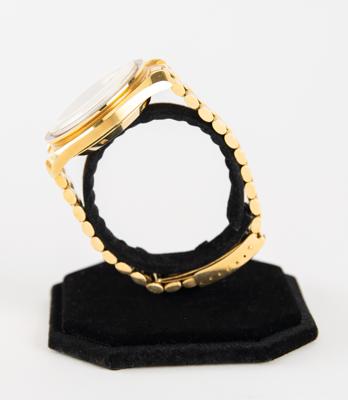 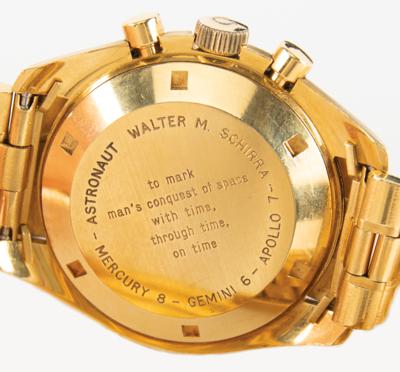 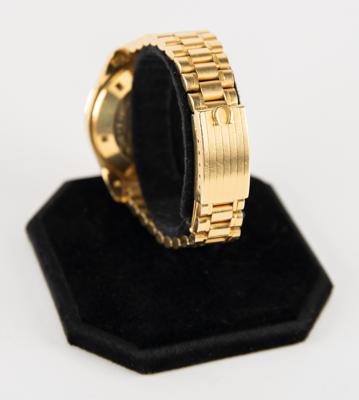 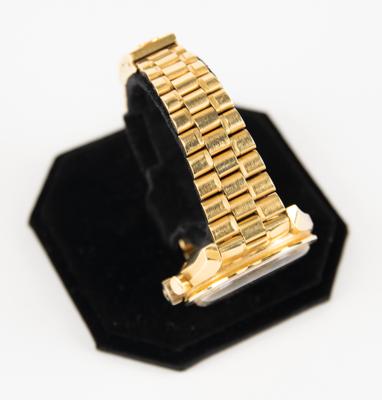 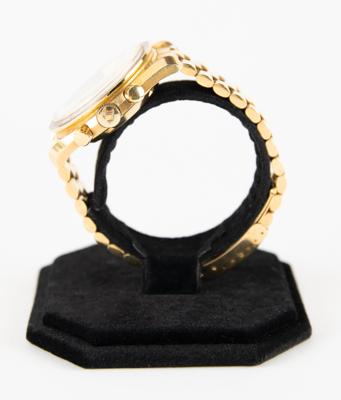 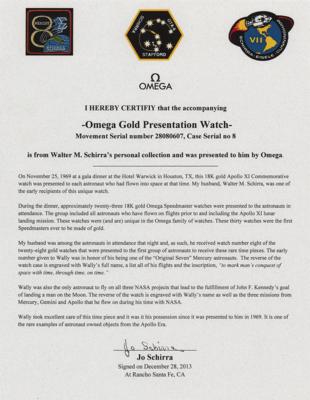 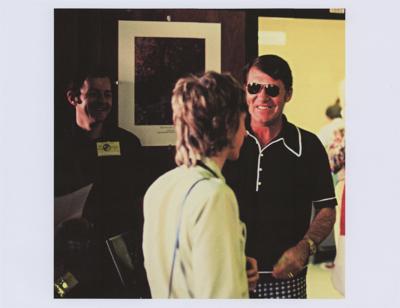 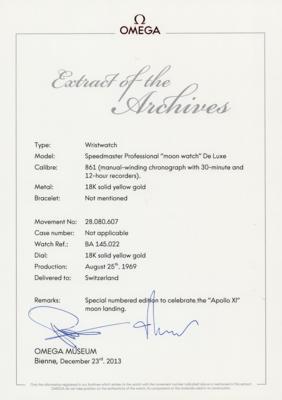 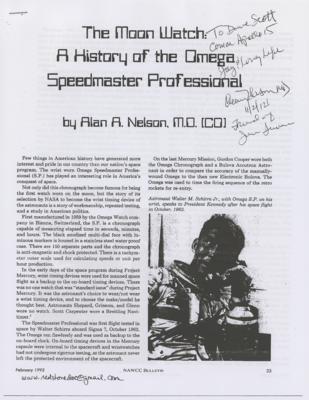 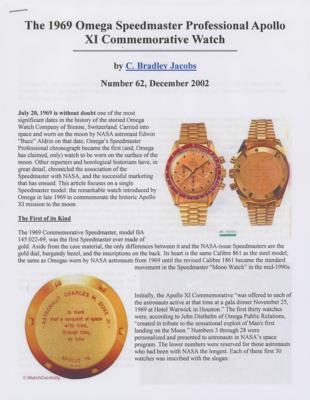 Wally Schirra’s personally-owned and -worn 18k solid yellow gold Omega Speedmaster Professional BA 145.022 watch that was presented to him at a special gala dinner on November 25, 1969, at the Hotel Warwick in Houston. Omega presented 26 of these gold commemorative watches—known as the ‘Tribute to Astronauts’ watch—to NASA astronauts alive and deceased, with the case back of each watch specially engraved with a quote, the name and missions of the astronaut, and a unique number relative to when the astronaut flew into space. This watch’s case back, issued as “No. 8,” is encircled, “Astronaut Walter M. Schirra, Mercury 8—Gemini 6—Apollo 7,” with the central quote reading: “To mark man’s conquest of space with time, through time, on time.” Schirra holds the unique distinction of being the only U.S. astronaut to fly on all three of NASA’s early space projects.

The first gold Speedmaster that Omega created, the watch features an 18K gold case with the same design cues and dimensions as the regular steel Speedmaster Professional. The gold bezel has a burgundy red aluminum inlay, with the famous ‘dot over ninety,’ and a special solid gold dial, indicated by the “OM” next to “Swiss Made,” which means ‘Or Massif’ or ‘solid gold.’ The hour markers are made of onyx, have two facets each, and are set in gold frames. The hands are black with gold centers and give wonderful contrast to the solid gold dial. The gold bracelet (1116/575) features hollow links and a small 14mm gold clasp with striping decoration. Inside the 18k gold 42mm case ticks the Lemania-based copper-colored chronograph caliber 861 with a steel brake; this caliber 861 has a ticking speed of 21,600vph and uses 17 jewels. In fine condition, with some wear to the presentation box.

Noted space collector Larry McGlynn purchased this watch directly from the Schirra family after Wally’s death. He had the watch professionally cleaned but not restored, with the exception of adding a new rubber gasket and an original 1969 burgundy bezel obtained directly from the Omega factory in Bienne, Switzerland (Schirra lost his original burgundy bezel). All other parts are original to the timepiece. Includes a square Omega Speedmaster box with a design of the cratered lunar surface (this box was provided with the steel version of the anniversary watch), as well as a black replacement bezel that Schirra procured as a replacement to the lost burgundy bezel.

Accompanied by an ‘Extract of the Archives’ document package from the Omega Museum, with remarks citing it is a “Special numbered edition to celebrate the ‘Apollo XI’ moon landing,’ an image of Schirra wearing the offered watch, and a detailed letter of authenticity signed by Schirra’s wife Jo, who writes: “I hereby certify that the accompanying Omega Gold Presentation Watch, Movement Serial number 28080607, Case Serial no 8, is from Walter M. Schirra’s personal collection and was presented to him by Omega. November 25, 1969, at a gala dinner at the Hotel Warwick in Houston, TX, this 18K gold Apollo XI Commemorative watch was presented to each astronaut who had flown into space at that time. My husband, Walter M. Schirra, was one of the early recipients of this unique watch.

During the dinner, approximately twenty-three 18K gold Omega Speedmaster watches were presented to the astronauts in attendance. The group included all astronauts who have flown on flights prior to and including the Apollo XI lunar landing mission. These watches were (and are) unique in the Omega family of watches. These thirty watches were the first Speedmasters ever to be made of gold.

My husband was among the astronauts in attendance that night and, as such, he received watch number eight of the [twenty-six] gold watches that were presented to the first group of astronauts to receive these rare timepieces. The early number given to Wally was in honor of his being one of the ‘Original Seven’ Mercury astronauts. The reverse of the watch case is engraved with Wally’s full name, a list of all of his flights and mission and [an] inscription…

Wally was also the only astronaut to fly on all three NASA projects that lead to the fulfillment of John F. Kennedy’s goal of landing a man on the Moon…Wally took excellent care of this timepiece and it was in his possession since it was presented to him in 1969. It is one of the rare examples of astronaut-owned objects from the Apollo Era.”