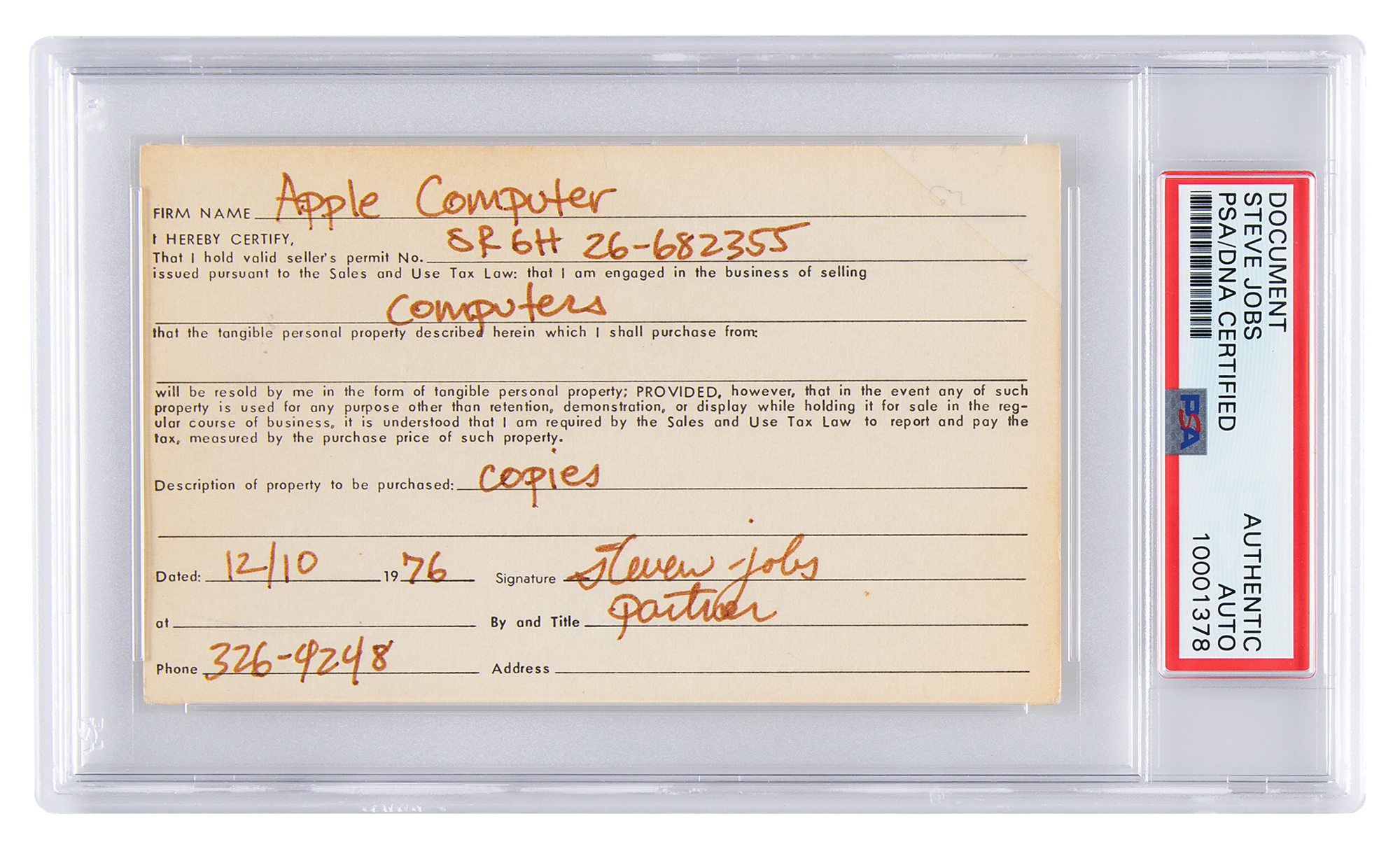 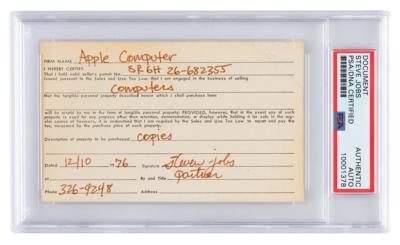 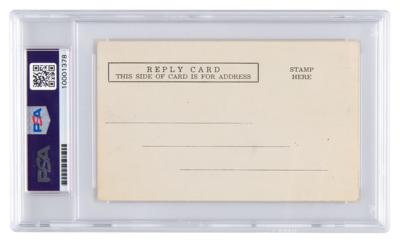 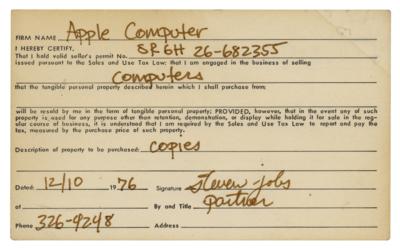 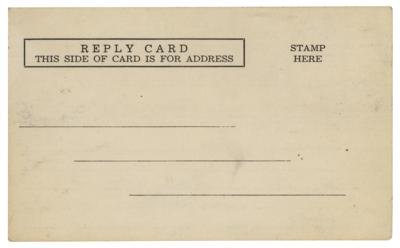 Partly-printed DS, signed “steven jobs,” one page, 5 x 3, December 10, 1976. Remarkable sales tax exemption card submitted by Steve Jobs to Village Copy Corner at the end of Apple Computer Company's first year in business. Jobs fills out the card in his own hand, notably writing out "Apple Computer" as his firm's name, and "computers" as its product. The document reads, in part: "I hereby certify, That I hold valid seller's permit No. SR6H 26-682355 issued pursuant to the Sales and Use Tax Law: that I am engaged in the business of selling computers." He affirms that the purchased "copies" will "be resold by me in the form of tangible personal property." At the bottom, Jobs adds his title, "partner," as well as Apple's first phone number, "326-4248." In fine condition, with a piece of clear tape to the upper right corner. Encapsulated in a PSA/DNA authentication holder.

The consignor notes that this was found in the home of his aunt, Elayne Zuber, who, with her husband Jim, owned Village Copy Corner in Los Altos. Located just four miles down the street from the Jobs family home—the site of the garage where Steve Jobs and Steve Wozniak famously developed the Apple-1—the shop was evidently frequented by Jobs for all his print-and-copy needs. A signed Steve Jobs check made payable to the copy shop, dated July 14, 1976, is also featured in this sale as Lot #5008.

It is probable that this card pertains to an order for the Apple-1 Operation Manual or the Apple Cassette Interface manual, as copies of corporate files or promotional brochures would not have been tax exempt. To our knowledge, the only "copies" that Apple would have purchased for resale in 1976 are those two manuals—both of which are very much 'local copy shop' affairs, printed on plain paper with simple, stapled bindings. It was not until the Apple II that the company produced a more refined, high-end manual, complete with a slick color cover and spiral binding.

Little did the Zubers know that the 21-year-old ordering copies in their corner shop would revolutionize communication forever, effectively putting them out of business in the process. The advent of desktop publishing, made practical by products like the Macintosh computer and LaserWriter printer, reduced demand for local copy shops. Then, the onset of the internet rendered the printing industry virtually obsolete.

On December 8, 1999, the Los Altos Town Crier announced the shop's closure amidst the headwinds brought about by their Silicon Valley neighbors: "After 22 years of serving the Los Altos community, Jim and Elayne Zuber will close their Village Copy Corner at 300 S. San Antonio Road this Friday. Chalk up the closing to a sign of the times as a business centered on paper became a victim of an increasingly paperless culture. 'Our biggest competitor is the consumer,' said Elayne Zuber. 'They can print things right at their desk from the computer or put their business on the Internet. Technological advances in software, fax machines, color copies and scanning machines have decreased our business to the point of not being worth continuing.'"