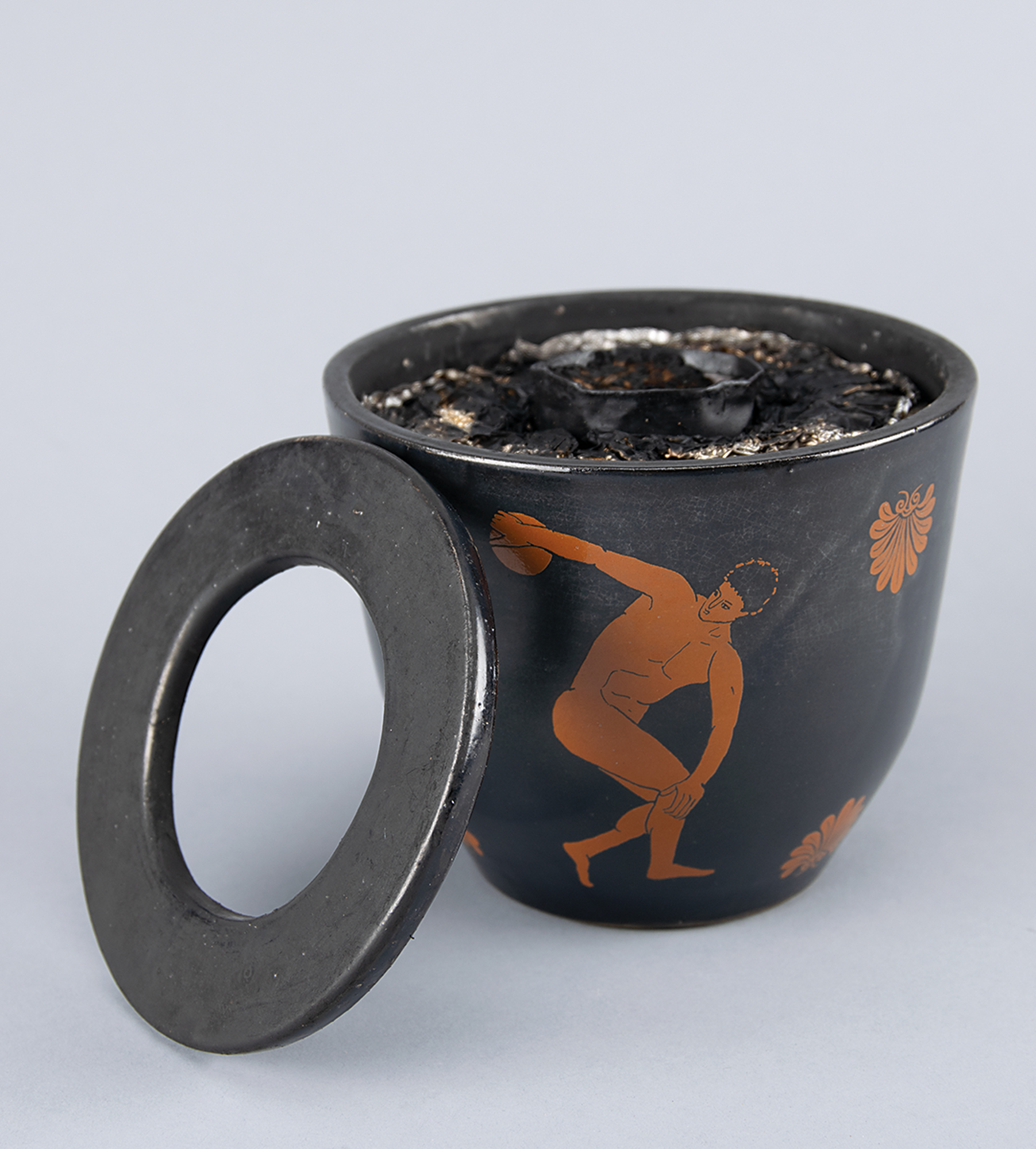 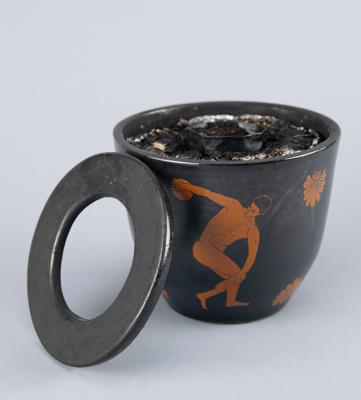 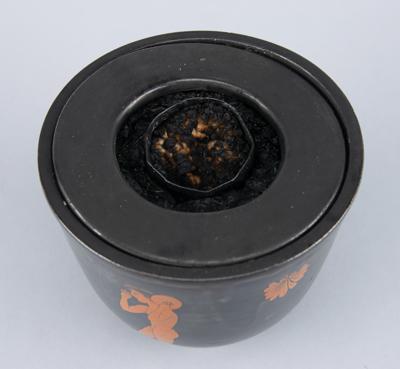 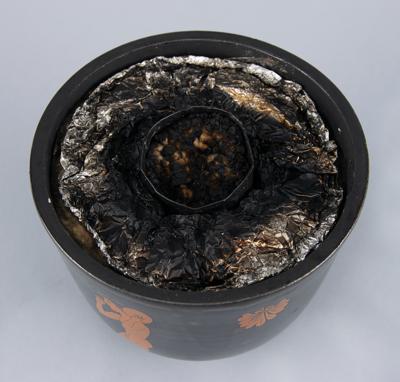 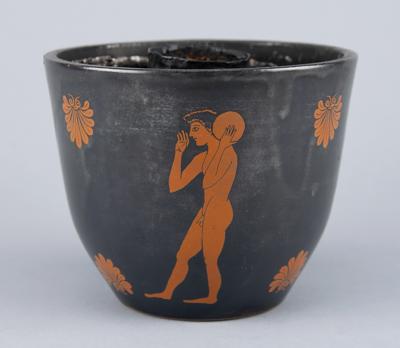 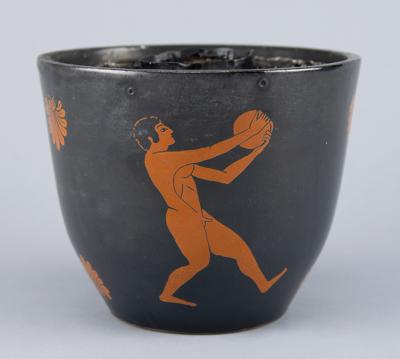 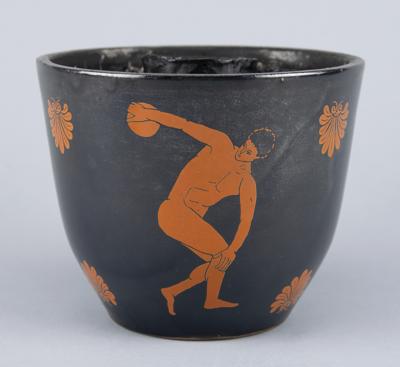 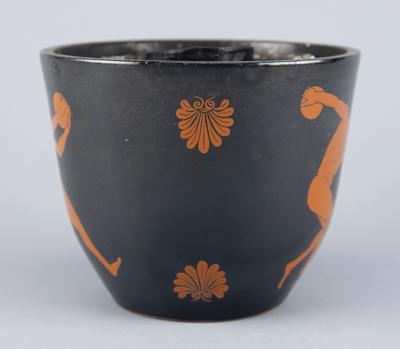 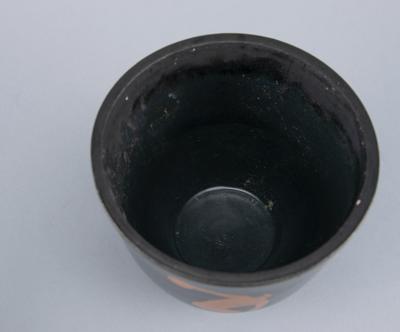 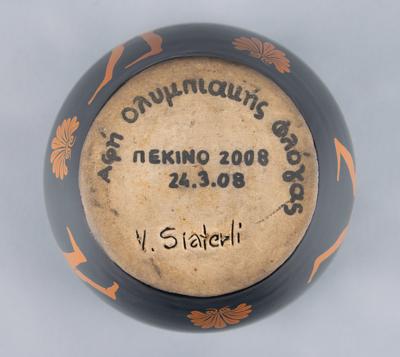 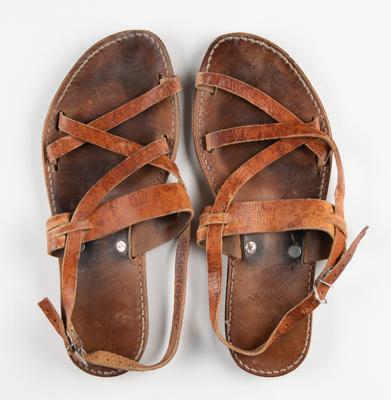 Exceedingly rare Greek lekythos ceramic bowl used in the official flame lighting ceremony of the Beijing 2008 Summer Olympics, which was held at the birthplace of the Olympic Games in Olympia, Greece on March 24, 2008. The glazed black bowl measures 6″ in diameter and 5″ in height, and features three hand-painted figures of nude discus throwers; the underside of the base is marked in Greek, “Torch Lighting Ceremony, Beijing 2008, 24. 3. 08,” and is engraved by the bowl’s artist, “V. Siaterli.” The bowl contains its original burner and ceramic ring.

As a rare addition, also included with the bowl is the official wardrobe worn by the High Priestess of the Beijing 2008 flame lighting ceremony, which is composed of a beautifully hand-made heavy fabric dress with its matching cloth belt and a pair of leather sandals.

The duty of the High Priestess in Olympia is to perform the lighting of the Olympic flame by utilizing the power of Apollo, the Greek god of sun and light. Among the pillars, in the ruins of the temple of Hera, beneath Kronos Hill, a reflective bowl is used to catch the rays of the sun and to spark a flame, igniting the Olympic torch held by the High Priestess. From this torch, the flame is passed, or kissed, to the lekythos bowl, which is carried into the ancient stadium and used as a conduit to light the first torch of the Olympic relay. From there, the Olympic flame was carried across the globe by a total of 21,800 torchbearers. Over the course of 130 days, the flame traversed over 85,000 miles, passing through every continent sans Antarctica, and even made its way to the summit of Mount Everest in a specially designed safety lamp. A one-of-a-kind artifact from the sacred Olympic flame lighting ceremony of the 2008 Summer Olympiad.