Theodore Roosevelt on Americanism: "I am concerned only with the honor and the spiritual greatness and national well-being of America; I don't care a snap of my fingers about threats from German-Americans, English-Americans, or the representative of any other hyphenated Americanism" 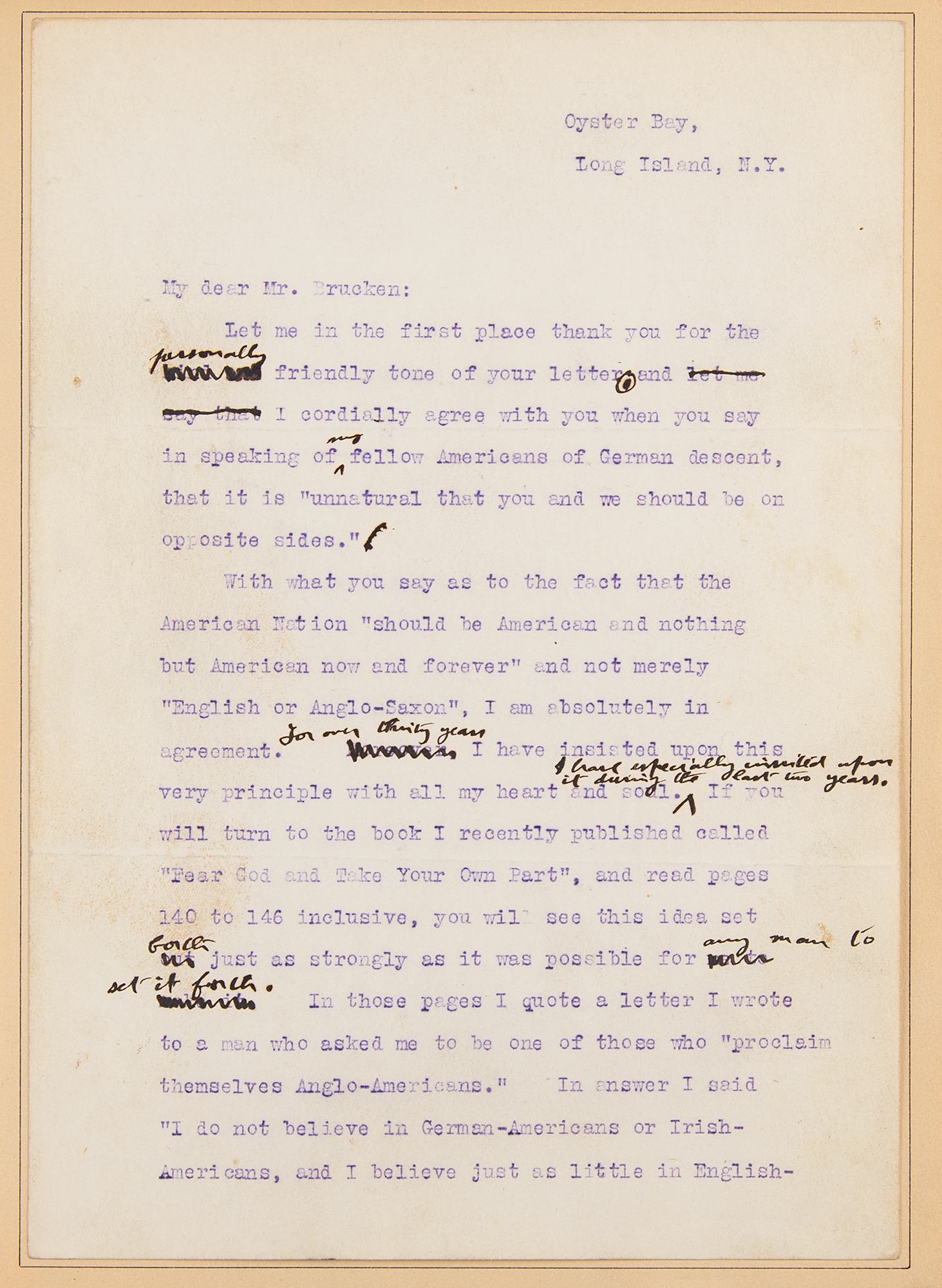 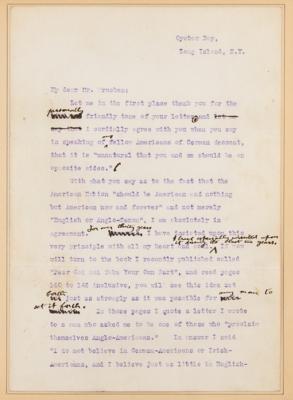 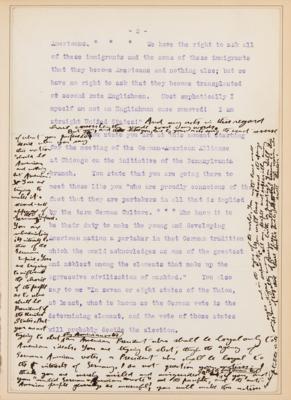 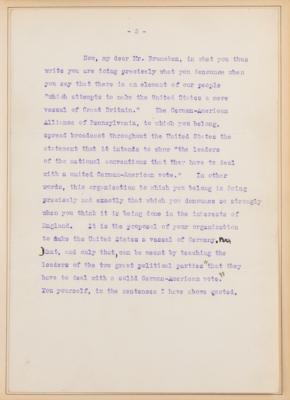 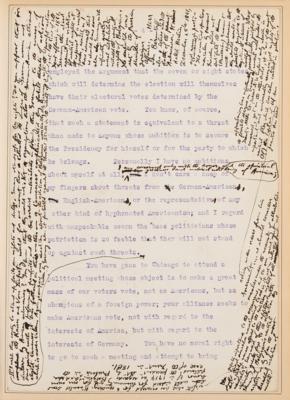 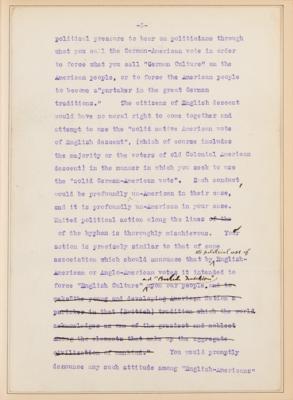 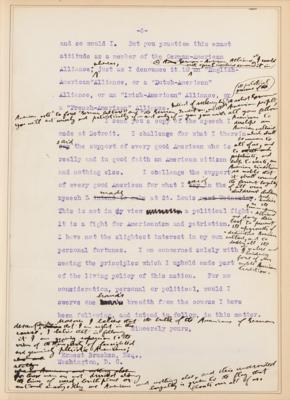 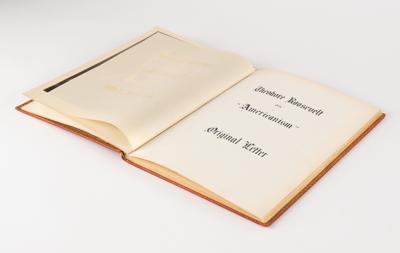 Theodore Roosevelt on Americanism: "I am concerned only with the honor and the spiritual greatness and national well-being of America; I don't care a snap of my fingers about threats from German-Americans, English-Americans, or the representative of any other hyphenated Americanism"

Extraordinary typed draft of a letter with extensive handwritten corrections by Theodore Roosevelt, totaling over 700 words in his hand, six pages, 7 x 10, no date but circa early 1916. Roosevelt writes on his concept of "Americanism" to Ernest Brucken of the German-American Alliance amidst World War I. He passionately outlines and defends his definition of American ideals, railing against "base politicians," "professional pacifists," and "sordid materialists." He also poignantly lashes out against the appearance of foreign influence in American politics, responding to Brucken's efforts to consolidate a block of pro-German voters in America.

In small part: "I cordially agree with you when you say in speaking of my fellow Americans of German descent, that it is 'unnatural that you and we should be on opposite sides.' With what you say as to the fact that the American Nation 'should be American and nothing but American now and forever' and not merely 'English or Anglo-Saxon,' I am absolutely in agreement. For over thirty years I have insisted upon this very principle with all my heart and soul. I have especially insisted upon it during the last two years…I do not believe in German-Americans or Irish-Americans, and I believe just as little in English-Americans. We have the right to ask all of these immigrants and the sons of these immigrants that they become Americans and nothing else; but we have no right to ask that they become transplanted or second rate Englishmen. Most emphatically I myself am not an Englishman once removed! I am straight United States!"

Here, Roosevelt hand-writes a passionate passage in the margins, in part: "You and those like you are doing the exact reverse of what you profess to desire when you say this nation 'should be American and nothing but American.' You are trying to make it a second-rate appendage of the German Empire. You are subordinating its interests to those of the German Empire. You are trying to influence the choice of the people as to who shall be President of the United States. But you are not trying to elect by American votes an American President who shall be loyal only to American ideals. You are trying to elect, through the agency of German-American votes, a President who shall be loyal to the interests of Germany. I do not question your motives. I think you are merely misled and misguided. But the fact remains that if your 'united German-American vote' and the pacifists and the anti-American people generally are successful, you will make this national contemptible in its own eyes and in the eyes of the world. You will have made its own citizens despise it…You will have been guilty of moral treason to this Republic and to all the men and women who dwell therein."

He continues in type, going on to address Brucken's political threats: "It is the proposal of your organization to make the United States a vassal of Germany. That, and only that, can be meant by teaching the leaders of the two great political parties 'that they have to deal with a solid German-American vote.' you yourself, in the sentences I have quoted, employed the argument that the seven or eight states which will determine the election will themselves have their electoral votes determined by the German-American vote. You know, of course, that such a statement is equivalent to a threat when made to anyone whose ambition is to secure the presidency for himself or for the party to which he belongs. Personally, I have no ambitions about myself at all, I am concerned only with the honor and the spiritual greatness and national well-being of America; I don't care a snap of my fingers about threats from German-Americans, English-Americans, or the representative of any other hyphenated Americanism; and I regard with unspeakable scorn the base politicians whose patriotism is so feeble that they will not stand up against such threats. I wish this country to stand up for its own rights and duties."

In a long handwritten passage, he alludes to continuing German submarine attacks on non-military vessels, asking: "Do you suppose that the Kaiser or Von Terpitz would for a moment have tolerated the murder of German women and children by American submarines? You know they would not let organizations like the German-American Alliance [to] have joined with professional pacifists and the sordid materialists in forcing this government to the course of abject tameness it has followed." Seeking a parallel, he draws upon the Trent Affair of 1861 and quotes from a letter by the Prussian Minister protesting the American seizure of the English vessel.

In conclusion, he says: "This is not in my view a political fight. It is a fight for Americanism and patriotism. I have not the slightest interest in my own personal fortunes. I am concerned solely with the principles which I uphold made part of the living policy of this nation. For no consideration, personal or political, would I swerve one hand's breadth from the course I have been following, and intend to follow, in this matter."

Each page is affixed by its edge to a slightly larger sheet, and bound together within a handsome custom-made red morocco binding; page one is detached from the binding, and several have edge splits which could be easily repaired. Also bound in are two matte-finish portraits, a calligraphic title page, and a complete typed transcript. In fine condition. A remarkable, lengthy exposition of Roosevelt's steadfast commitment to American ideals.