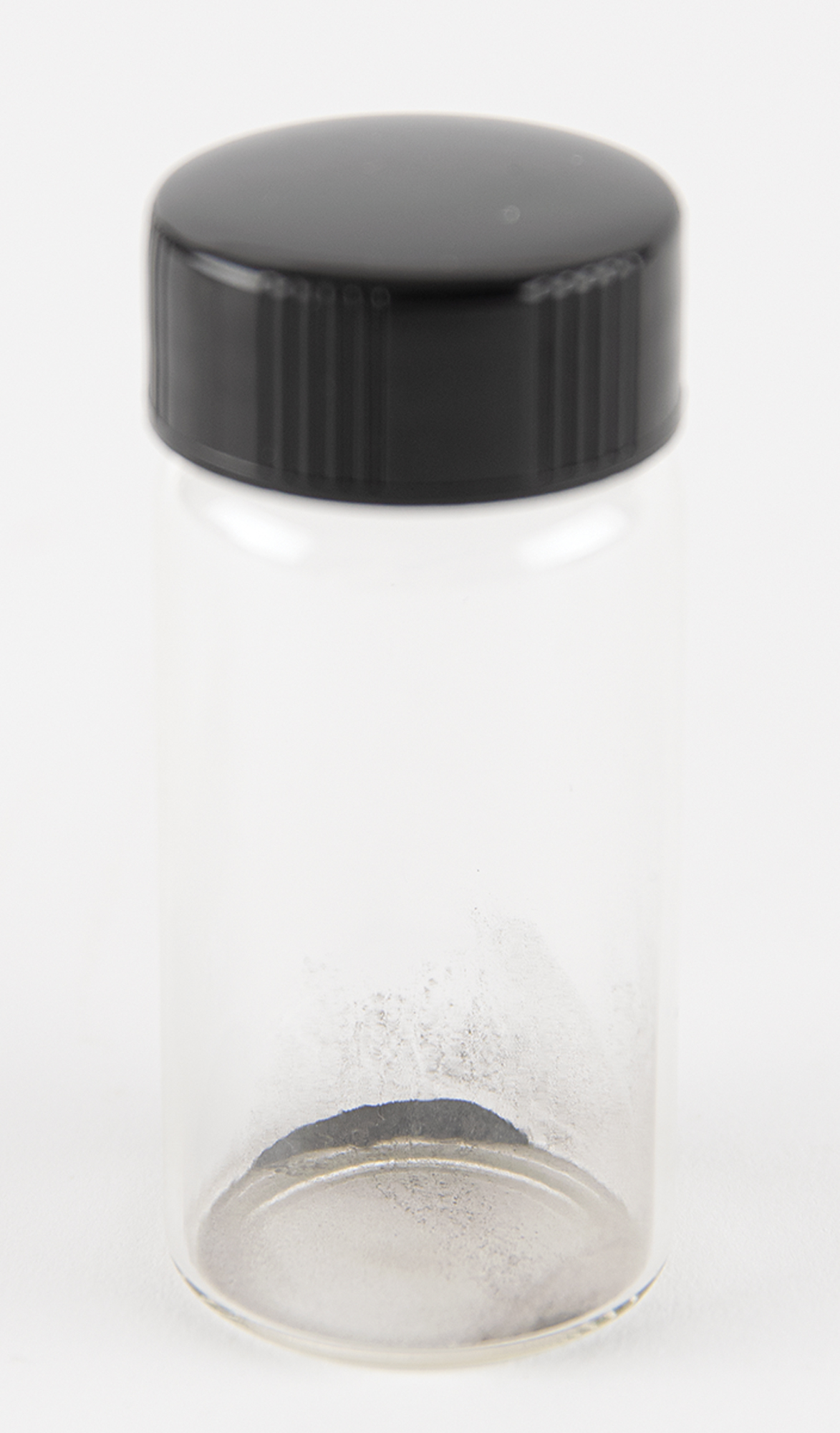 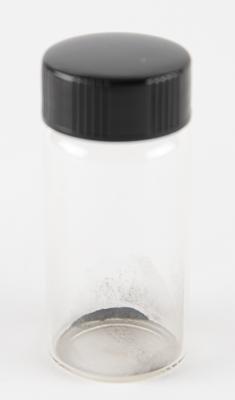 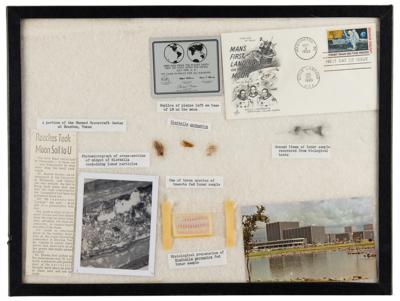 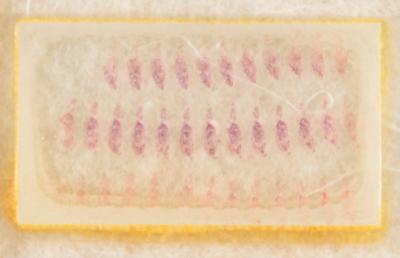 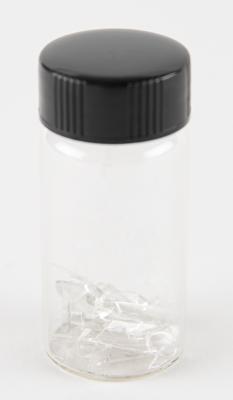 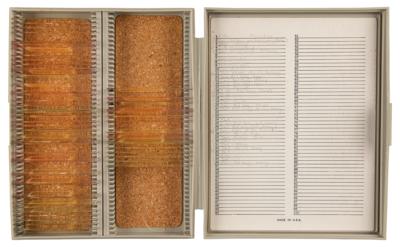 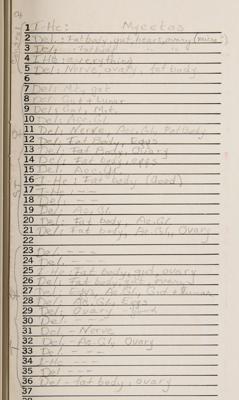 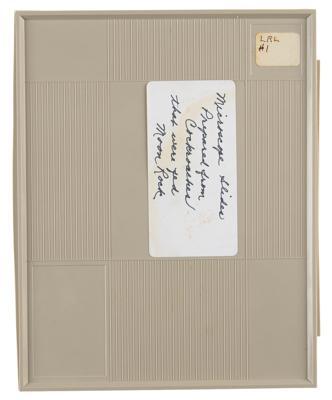 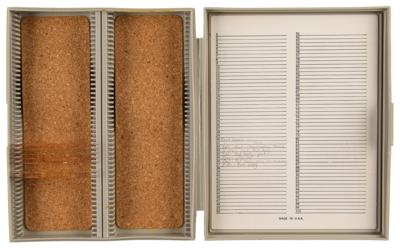 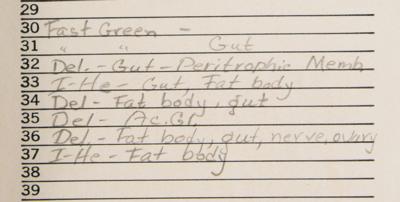 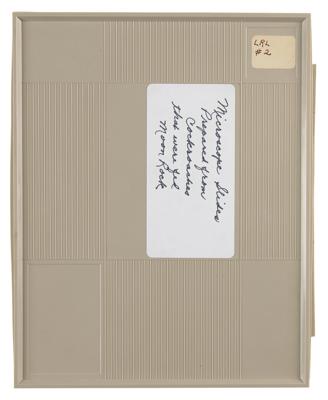 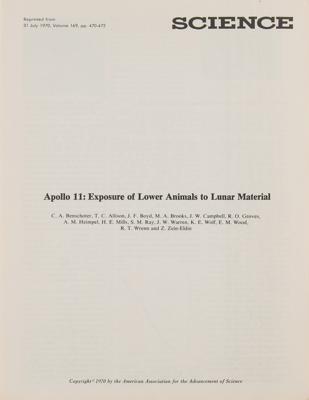 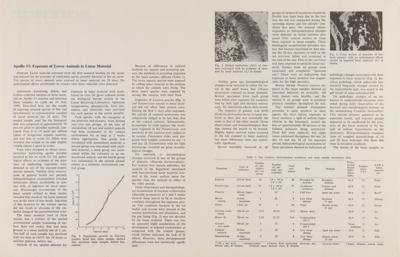 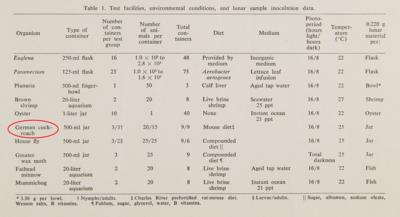 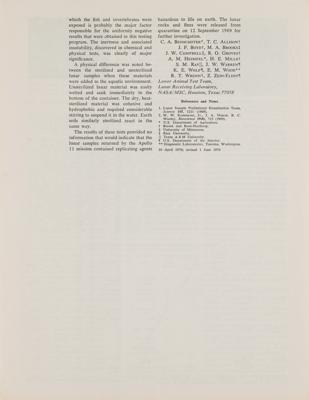 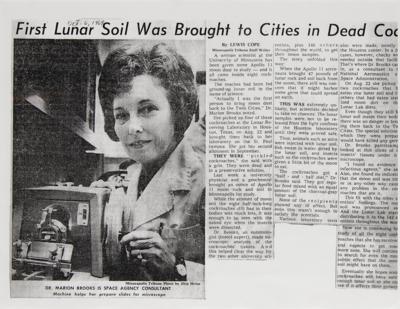 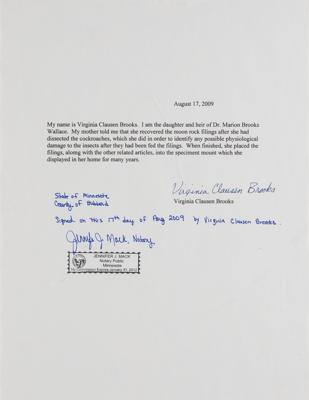 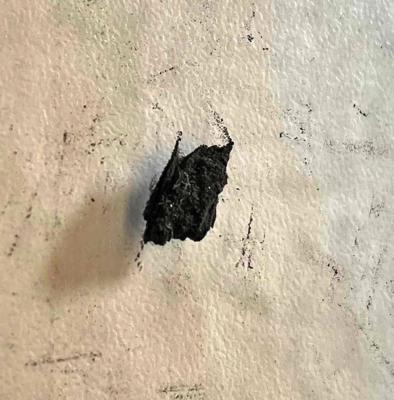 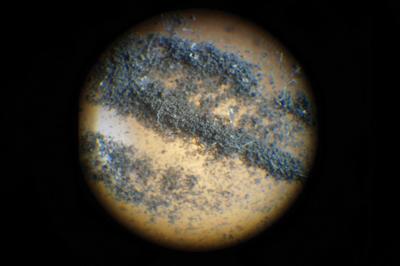 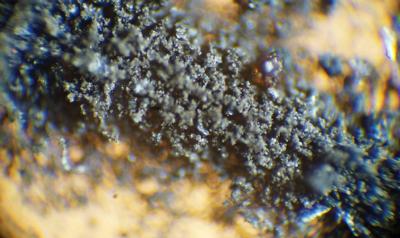 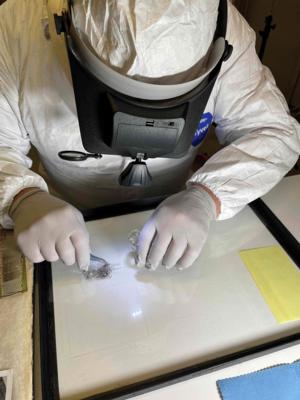 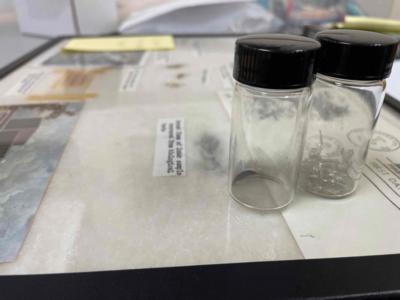 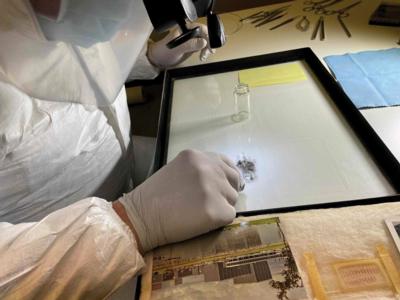 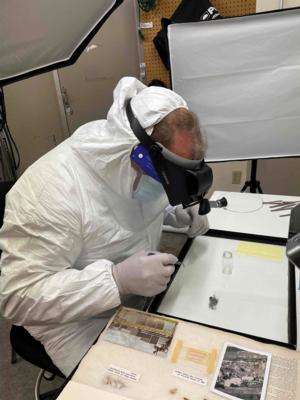 Extraordinary specimen display from an Apollo 11 lunar dust experiment, in which German cockroaches (among other lower creatures) were fed lunar soil material in order to observe potential pathological effects. The display housed a vial of ground fines of material extracted from the cockroaches following the biological tests, three of the preserved Blattella germanica cockroaches, and a glass slide containing a histological preparation of Blattella germanica fed the lunar sample, among several images and souvenirs associated with man's first moon landing. The original vial of extracted material was broken, spilling its contents into the display; the gray discoloration in the white batting is the result. The ground fines and glass shards were then meticulously separated into two larger glass vials. The material weighs approximately 40 milligrams (mg).

Also includes two cases of "Microscope Slides Prepared from Cockroaches that were fed Moon Rock," marked "LRL #1" and "LRL #2." Combined, the cases contain a total of 66 glass slides prepared with histological samples from the control and experimental groups. Contents of the slides are identified on tables inside the case lids, though they may no longer be arranged in the matching order.

These experimental samples originate from the collection of Dr. Marion Brooks, an entomologist from the University of St. Paul contracted by NASA to perform the experiment. Includes a letter of provenance from her daughter, as well as photocopies of documentation demonstrating her affiliation with NASA and contemporary reportage on her interesting work.

The article 'Moon Dust and Cockroaches,' published in Minnesota Science, describes the experiment at length: the Apollo 11 astronauts returned to Earth with some 47.5 lbs of moon rock, which was quarantined in a vacuum chamber for several weeks. The scientists studying invertebrate life then received about 4.5 pounds of the material, and ground it up into small particles for their studies on microscopic organisms, insects, and aquatic life. Insects were exposed to the lunar particles by mixing it with their food, and aquatic species had it introduced to their tanks. None of the individuals that died during the experiment met their demise as a result of lunar dust exposure. These experiments were carried out within the Lunar Receiving Laboratory (LRL).

Following this initial experiment, Dr. Brooks was tasked with dissecting the cockroaches to prepare histological sections on glass slides. She then examined them for evidence of pathological conditions caused by ingestion of the extraterrestrial material. She found no evidence of disease or pathogens, and was surprised to observe that the lunar particles caused no damage to the cockroaches' stomach cells. Includes an original offprint of the journal article 'Apollo 11: Exposure of Lower Animals to Lunar Material,' published by Brooks and colleagues in the July 31, 1970, issue of Science, discussing their findings.

NASA keeps famously close guard over lunar material returned by the Apollo missions, making it virtually impossible to obtain. In this instance, while still inside the LRL, the material was subjected to destructive experimentation as it was fed to the cockroaches. The dead cockroaches were then transferred to Dr. Brooks for further examination at the University of St. Paul. This cockroach experiment is known to exist in public, with several newspaper articles published over the years and a prior auction of this lot by Regency Superior (lot number 191, April 2010). Documentation is included on our website.

Taken from the bellies of Blattella germanica individuals, this material has been transformed from moon dust to cockroach chyme—a one-of-a-kind rarity in the space marketplace.