The 18-year-old Steve Jobs seeks employment as an 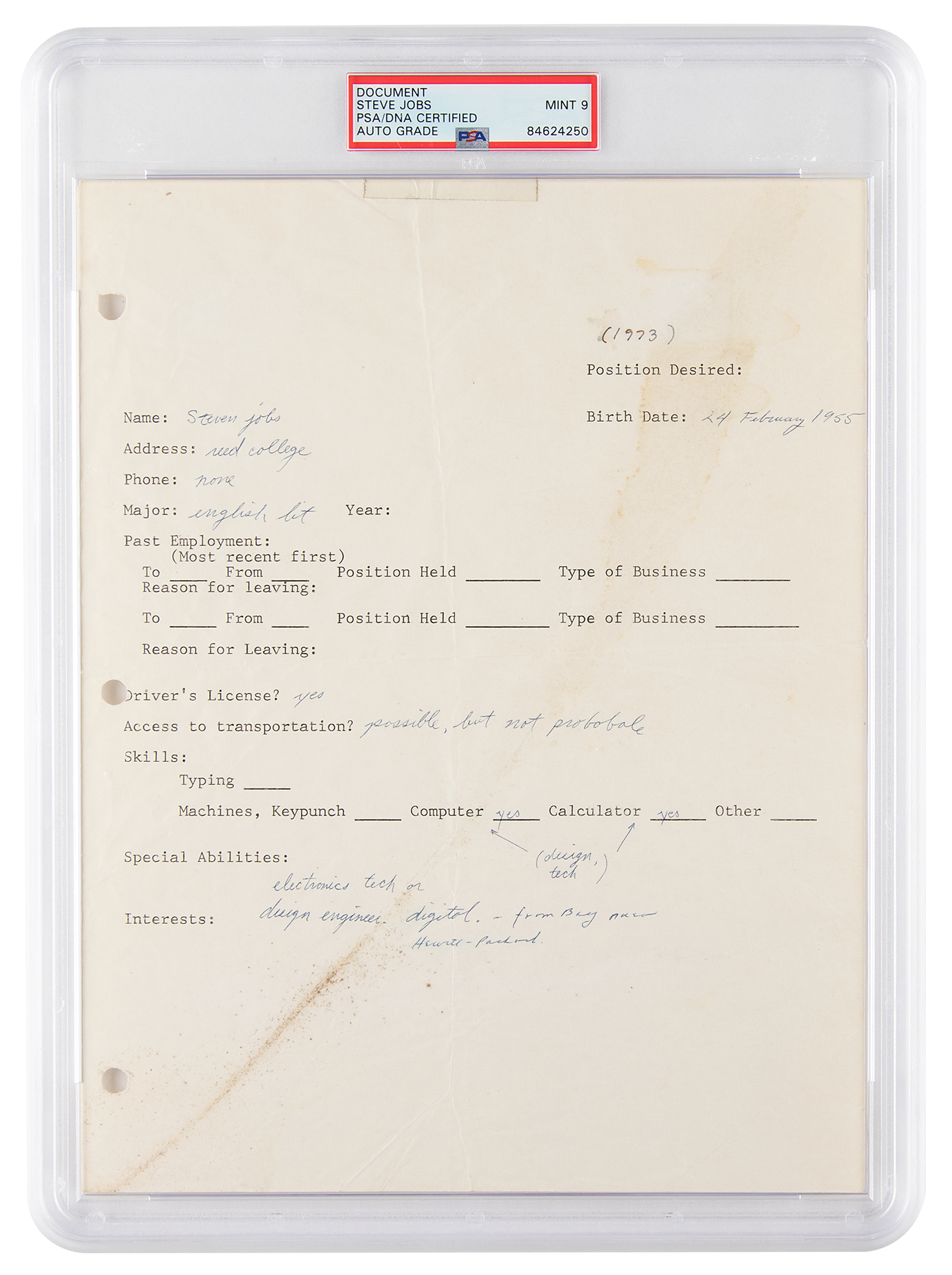 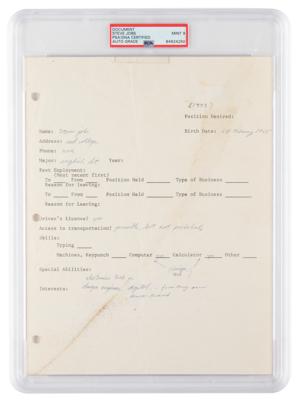 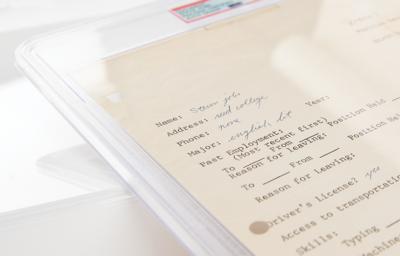 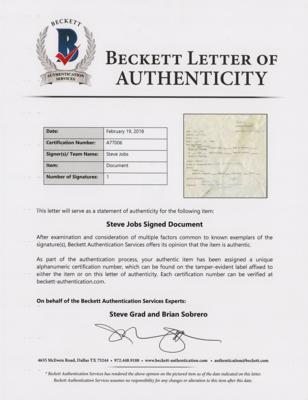 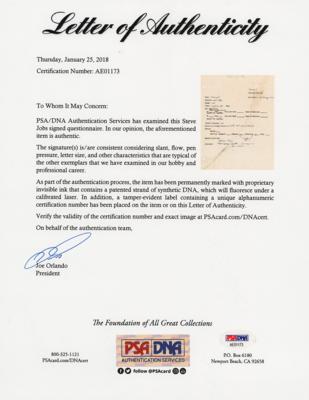 The 18-year-old Steve Jobs seeks employment as an

Incredible job application questionnaire filled out and signed by Steve Jobs, one page, 8.5 x 11, annotated 1973 in another hand. Jobs fills out the document with his name, "Steven jobs"; address, "reed college"; phone, "none"; and major, "english lit." In the middle section, he writes "yes" in response to 'Driver's License?' and "possible, but not probable," in reply to 'Access to transportation?' With regard to his skills, next to 'Computer' and 'Calculator,' he writes, "yes (design, tech)." At the bottom, he describes his 'Special Abilities' as "electronics tech or design engineer. digital.—from Bay near Hewitt-Packard [sic]." In very good condition, with intersecting folds, overall creasing, light staining, and some old clear tape to the top edge. Encapsulated and graded by PSA/DNA as "MINT 9," and also accompanied by full letters of authenticity from PSA/DNA and Beckett Authentication Services. In addition to the physical job application, the winning bidder will be transferred a minted NFT on the Ethereum blockchain that includes a high resolution image of the document.

There are multiple theories as to the origin of this particular job application. One is that Jobs used it to secure a job on campus in Reed's psychology department, repairing circuits in the equipment used for experiments with rats and pigeons. Another, recollected by Pong creator Al Alcorn, is that Jobs submitted it to Atari to obtain his position as a technician. Either way, the application is of enormous importance and represents a transformative moment in the life of Steve Jobs.

Jobs enrolled at Reed College for the fall semester in 1972, but dropped out after just six months to preserve his parents’ meager funds. However, he hung around campus for a year and a half to audit creative courses, including classes on Shakespeare, dance, and calligraphy—these would help to shape his artistic worldview that influenced the innovation of the Macintosh computer. In his 2005 Stanford commencement speech, Jobs recalled: ‘If I had never dropped in on that single calligraphy course in college, the Mac would have never had multiple typefaces or proportionally spaced fonts.’

While at Reed in 1973, he got a part-time job repairing electronics for the psychology department, granting him access to a soldering iron and workbench. In an obituary published by Reed, Prof. Bill Wiest remembered: 'I’d walk in, and he’d have a project on the bench with switches and wires and circuits. He’d smile and say good morning, and we’d talk. He was always very polite, but was pretty vague about what he was actually doing—he’d just say he was just working on some experiments.'

In 1974, his technical skills now honed, Jobs was perusing the tech industry's help-wanted classifieds in the San Jose Mercury when an Atari headline caught his eye: 'Have fun, make money.' When the unkempt teen showed up in Atari's office—and refused to leave until they gave him a job—the personnel manager didn't know whether to let him in or call the cops. Knowing that the dropout youngster would be cheap to hire, Atari's chief engineer—Pong creator Allan Alcorn—said: 'Send him in!' Since Jobs knew how to solder and wire wrap, he was hired on as a technician.

At Atari, Jobs learned to keep user interfaces simple and intuitive—after all, the company's success was rooted in Pong's simplicity: 'Deposit Quarter, Avoid Missing Ball for High Score.' This sort of elegant user-friendliness would become a hallmark of Jobs's later products—from the one-button mouse to the touchscreen iPhone. He also refined his business acumen—Jobs famously farmed out the engineering of the Atari 'Breakout' prototype to his friend, Steve Wozniak, who implemented several innovative cost-savings circuit designs. Jobs earned a $5000 bonus for the project’s success and reportedly kept it a secret.

In 1976, Jobs and Woz set out on their own and founded Apple, introducing the personal computer to the masses. This remarkable employment questionnaire reveals Jobs's early aspiration to work in the fledgling tech industry, which he would soon revolutionize forever.