Immensely desirable 1908 handwritten letters from the Wright Brothers, dating to their important demonstration flights in Europe and the States 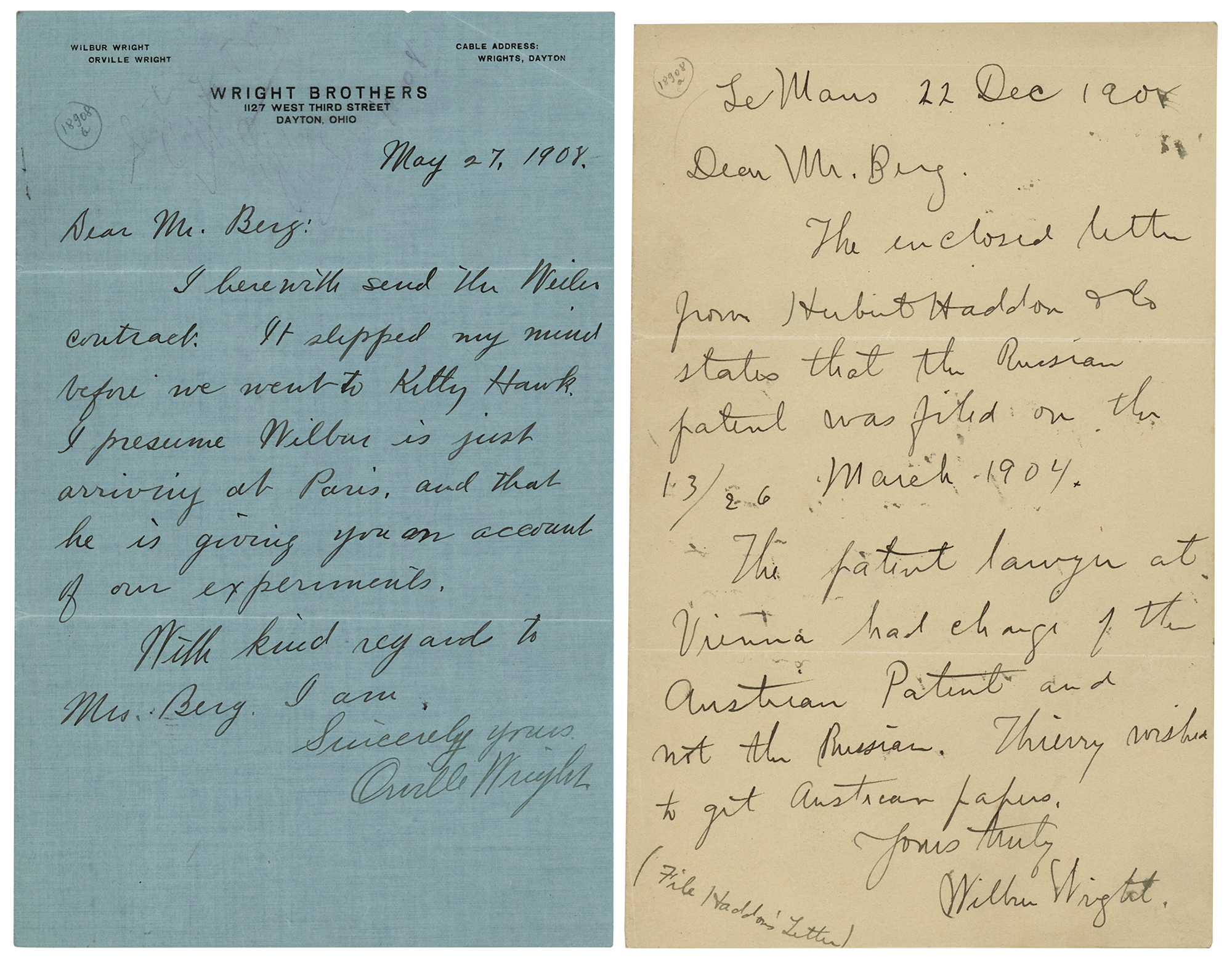 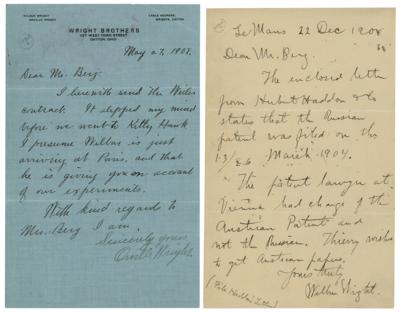 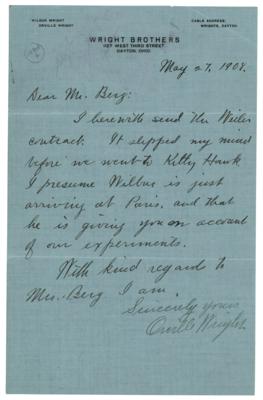 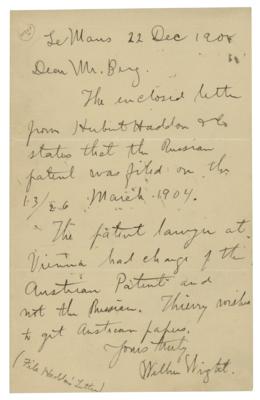 Immensely desirable 1908 handwritten letters from the Wright Brothers, dating to their important demonstration flights in Europe and the States

Hugely desirable pairing of ALSs from legendary aviation brothers Orville and Wilbur Wright, both one page, similarly sized at 5.5 x 8.5 and 5.25 x 8.5, and addressed to engineer and businessman Hart O. Berg, a Flint and Company representative contracted to help manage the Wright Brothers' business in Europe. Berg’s wife, Edith, became the first American woman to fly as a passenger in an airplane when she joined Wilbur for a two-minute and seven-second flight at Camp d'Auvours in Le Mans, France, on October 7, 1908.

Orville’s letter, handwritten on blue Wrights Brothers letterhead, dated May 27, 1908, reads: “I herewith send the Weiler contract. It slipped my mind before we went to Kitty Hawk. I presume Wilbur is just arriving at Paris, and that he is giving you an account of our experiments. With kind regard to Mrs. Berg.”

Wilbur’s letter, addressed from Le Mans on December 22, 1908, in full: “The enclosed letter from Hubert Haddon & Co., states that the Russian patent was filed on the 13/26 March 1904. The patent lawyer at Vienna had charge of the Austrian Patent and not the Russian. Thierry wishes to get Austrian papers.” Wilbur adds below, “(File Haddon’s Letter).” French patent agent Charles Thierry was the proxy for the Wright Brothers in 1908. Ostensibly half of the patent agency Mennons et Thierry, Thierry helped patent inventions made by Adolphe Francois Joseph Doutre, Preston Albert Watson, and, of course, the Wright brothers (Patent FR-1908-384124 and Patent FR-1908-384125). In overall fine condition.

The year 1908 was pivotal for the Wright Brothers, whose contracts with the U.S. Army and a French syndicate depended on successful public flight demonstrations. The brothers divided their efforts, with Wilbur sailing for Europe, and Orville presenting near Washington, D.C. Orville’s public showings were cut short following a disastrous crash at Fort Myer, Virginia, on September 17, which resulted in the death of his passenger, Lt. Thomas Selfridge—the first airplane fatality.

Undeterred, Wilbur’s record-breaking showcases in France simultaneously wowed spectators and stymied naysayers. On September 16, he set a new world record for distance and duration, flying 15.2 miles in 39 minutes, and later that day marked another first when he flew his first passenger, French balloonist Ernest Zens. He flew five test flights at Camp d'Auvours on October 5, and on December 8, he set a world endurance record of one hour and 31 minutes and 25 seconds over an estimated distance of 41 miles, a flight which won the Aero Club of France prize. On December 18, Wilbur flew his plane to an altitude of 115 meters (approximately 360 feet), setting a new altitude record, and on December 31st, he won the Michelin Prize of 20,000 francs for the longest flight of the year, which departed from Camp d'Auvours and lasted 2 hours, 18 minutes, and 53 seconds.