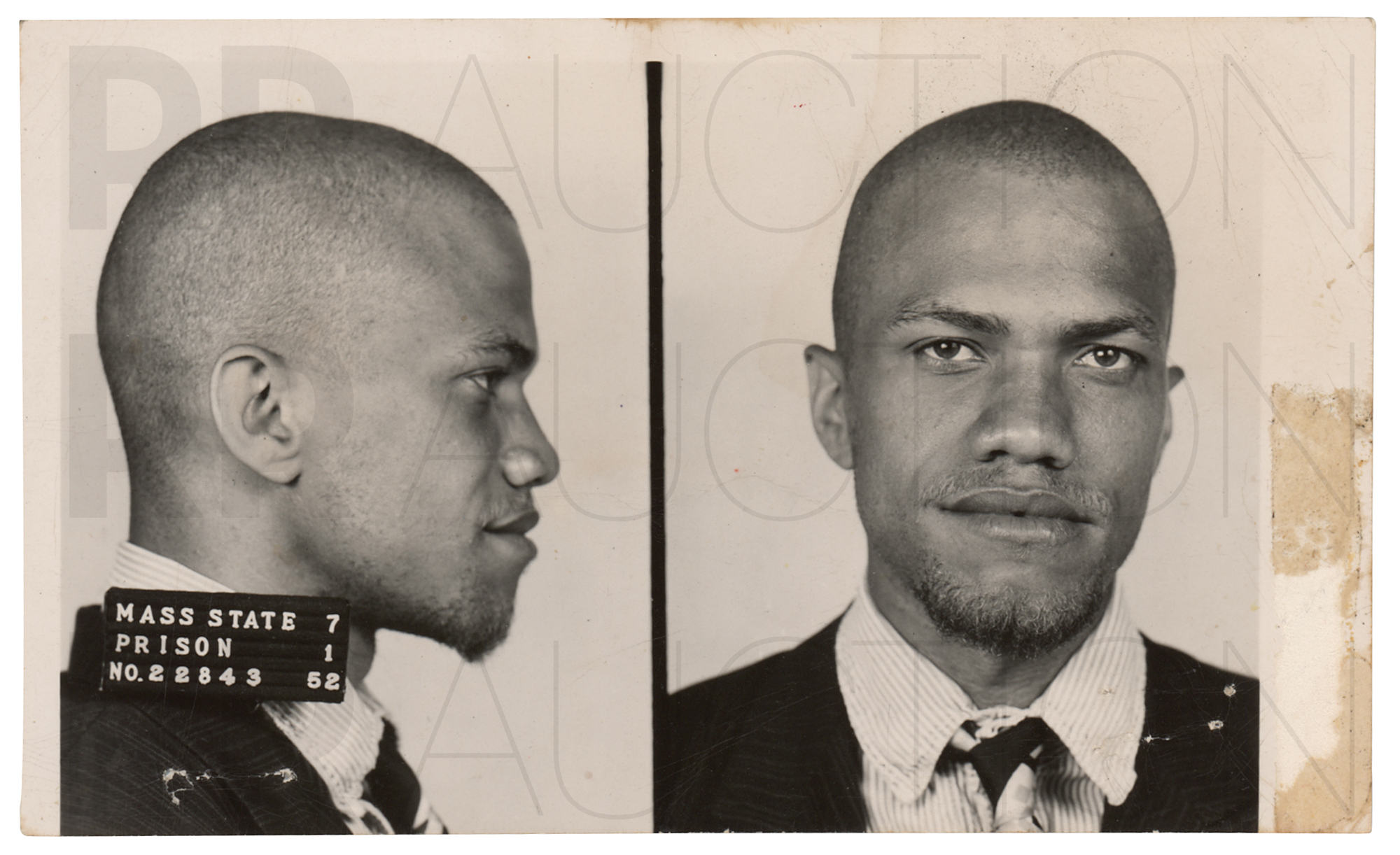 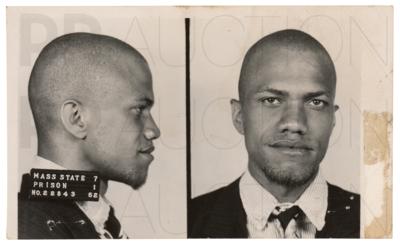 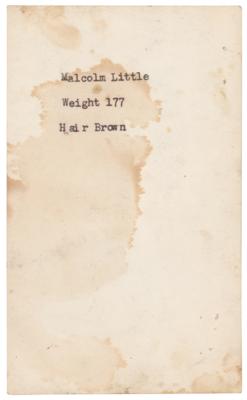 Sharp original vintage glossy 5.25 x 3 'mugshot' photograph of Malcolm Little taken on July 1, 1952, one month before his release from prison. Annotated in type on the reverse: "Malcolm Little, Weight 177, Hair Brown." In very good to fine condition, with creasing, emulsion irregularity, and an old tape stain and related surface loss to the right border.

Malcolm Little was found guilty of larceny and breaking and entering in 1946, and began serving his eight-to-ten year sentence at Charlestown State Prison in February. He made efforts to reform and educate himself while there, and with his sister Ella began a letter-writing campaign in hopes of getting transferred to the Norfolk Prison Colony (today known as MCI-Norfolk)—it offered broader educational opportunities that did not exist in Charlestown. He ultimately found success, and was transferred to Norfolk on March 31, 1948. In The Autobiography of Malcolm X, he described the colony as 'comparatively, a heaven, in many respects,' observing: 'Norfolk Prison Colony represented the most enlightened form of prison that I have ever heard of. In place of the atmosphere of malicious gossip, perversion, grafting, hateful guards, there was more relative ‘culture,’ as ‘culture’ is interpreted in prisons. A high percentage of the Norfolk Prison Colony inmates went in for ‘intellectual’ things, group discussions, debates, and such.' He joined the weekly debate team, where he honed his oratorical skill, and devoted much of his time to studying in the prison library. Most importantly, it was during this time that Malcolm discovered the Nation of Islam. It seems that he began to question authority after becoming involved with the Nation of Islam, and was shipped back to Charlestown State Prison for being 'undesirable.'

In this photograph, he stands on the precipice of freedom. Paroled on August 7, 1952, after seven years served, Malcolm Little left prison as Malcolm X, a devout member of the Nation of Islam and a committed disciple and pupil of Elijah Muhammad. He soon moved to Detroit and begin an intensive recruiting campaign for the Nation of Islam. Relying on the rhetorical skill honed during his time in prison, Malcolm X attracted new members wherever he spoke. Within a year, he would triple the membership of Detroit's Temple No. 1. Increasingly recognized as the public face of the Nation of Islam, he returned to the east coast in late 1953 and continued to grow the organization.