Lot #402
The Edinburgh Advertiser and The Salisbury and Winchester Journal 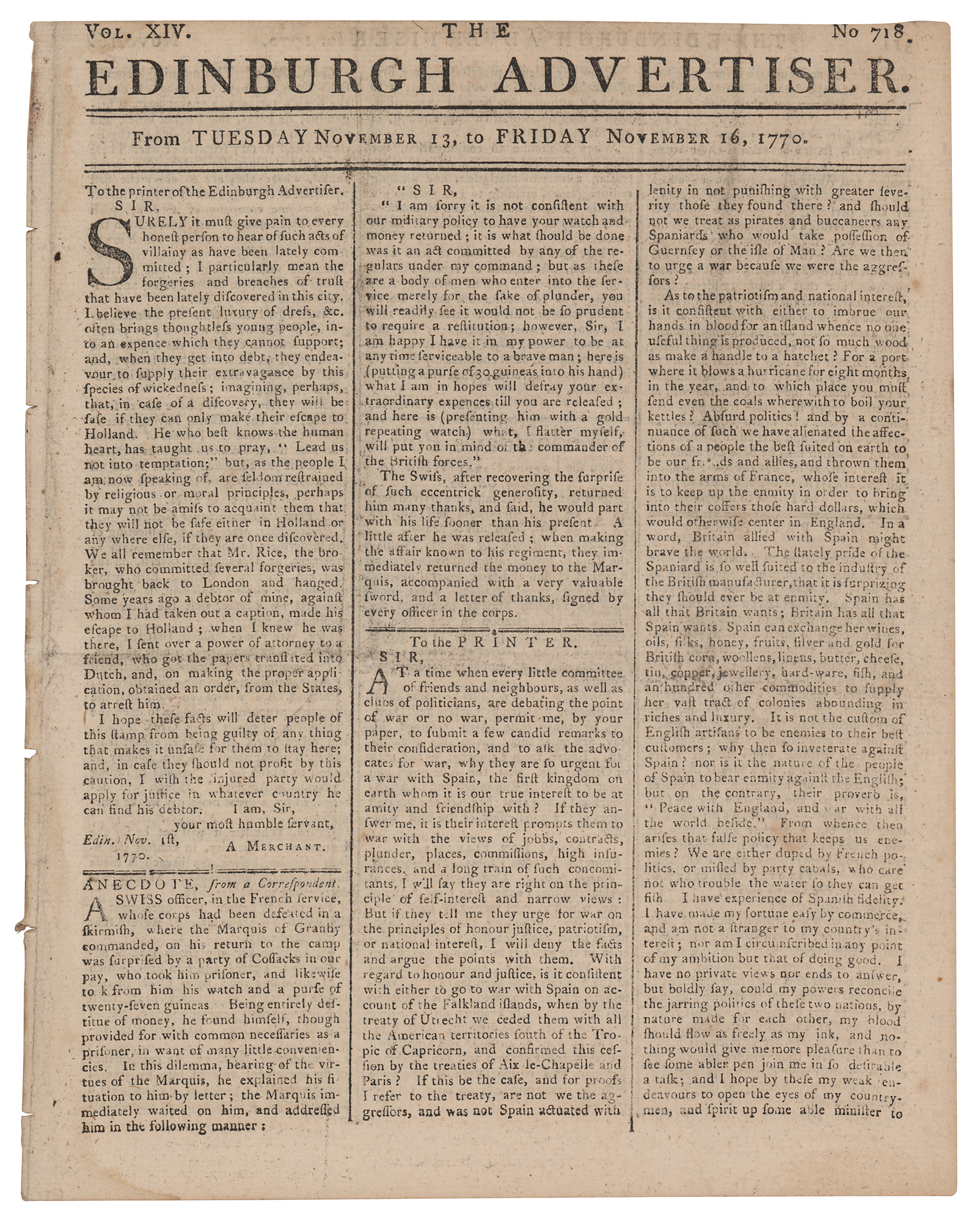 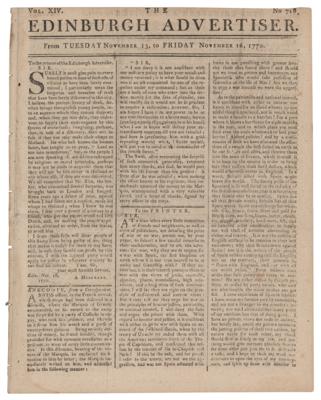 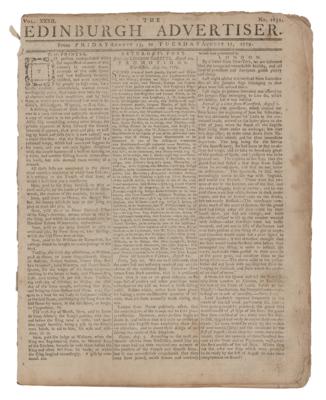 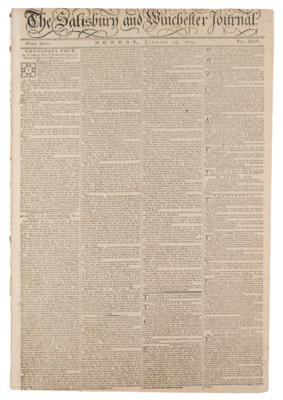 The Edinburgh Advertiser (November 13-16, 1770)
Scottish coverage of the 'Non-Importation Agreement'
The Edinburgh Advertiser, November 13-16, 1770, printed by Alexander Donaldson. Red tax stamp. Non-Importation Agreement—On September 24, 1770, a meeting of the subscribers of the non-importation agreement—chaired by Thomas Willing, Esq.—was held at Davenport’s tavern in Philadelphia, and a resolution was approved to alter the agreement, without consultation with the other colonies, “to open the importation of goods from Great Britain and other parts of Europe, except teas, and such other articles as are, or may be subject to duties for the purpose of raising a revenue in America.”

The Davenport tavern agreement, among “several importers of dry goods at Philadelphia,” was the subject of a “large body of inhabitants…at the State house," with Joseph Fox, Esq,. as chairman; it was resolved that there should have been consultation with the other colonies before any breach of the non-importation agreement; the inhabitants will join with the merchants; there should be no importation of goods from other colonies; the adoption of the Maryland agreement would be of advantage to Pennsylvania and “tend to keep up a harmony among the colonies and to procure a repeal of the offensive act”—likely the Revenue Act/Townshend duties. London Packet (Capt. James Cook) to be loaded with goods destined for Philadelphia as a consequence of the “confirmation of the account lately received of the merchants of that place having come to a resolution to import goods as usual (tea excepted).” Other reports about the dissolution of the non-importation agreement “in almost every province in North America.”

The Edinburgh Advertiser (August 13-17, 1779)
King George III orders a prayer to be read in all churches: "Turn, O Lord, the hearts of his rebellious subjects in America"
The Edinburgh Advertiser, August 13-17, 1779, printed by and for James Donaldson. Red tax stamp. Report from Report from Boston that “there were not above 100 armed men in that town, and those only militia…the inhabitants were in the greatest distress for every necessary of life, particularly the article of bread, which money could hardly purchase.” From the minutes of Congress, “the province of Maryland have refused to accede to the confederation of the rebel states.” Letter from Carolina reports the activities of British General Prevost, who called for a received a conditional surrender; however, Count Pulaski marched in a considerable reinforcement, and forbade the inhabitants fulfilling the terms of the capitulation, under the severest injunctions. In consequence of which General Prevost, not willing to run any hazard in investing the town with his present force, withdrew a few miles, without a single shot being fired on either side, in order to receive the promised reinforcement of 2500 men from St. Lucia, under the command of Gen. Medows.”

King orders prayer to be read in all churches which includes: “Turn, O Lord, the hearts of his rebellious subjects in America, and let neither our unhappy divisions, nor our other manifold sins and provocations, obstruct his designs for the public good, nor bring down thy judgments upon us…” Letters from Boston assert that the “alliance with France gave great disgust to every body.” Letters from New York indicate that the “rebel fort commanded by General McDougal was so strong, being situated in a mountainous and almost inaccessible country where there were no roads to bring wagons, stores or artillery, it was doubted if General Clinton would attack it. Washington had taken post in very strong ground, from which he could not be dislodged without great loss and difficulty. The accounts from the South said, that the reason of General Prevost’s retiring to John Island was that Polish Count Pulaski had thrown himself with considerable force in to Charlestown, while the rebel General Lincoln was advancing in the rear of General Prevost with a great army…”