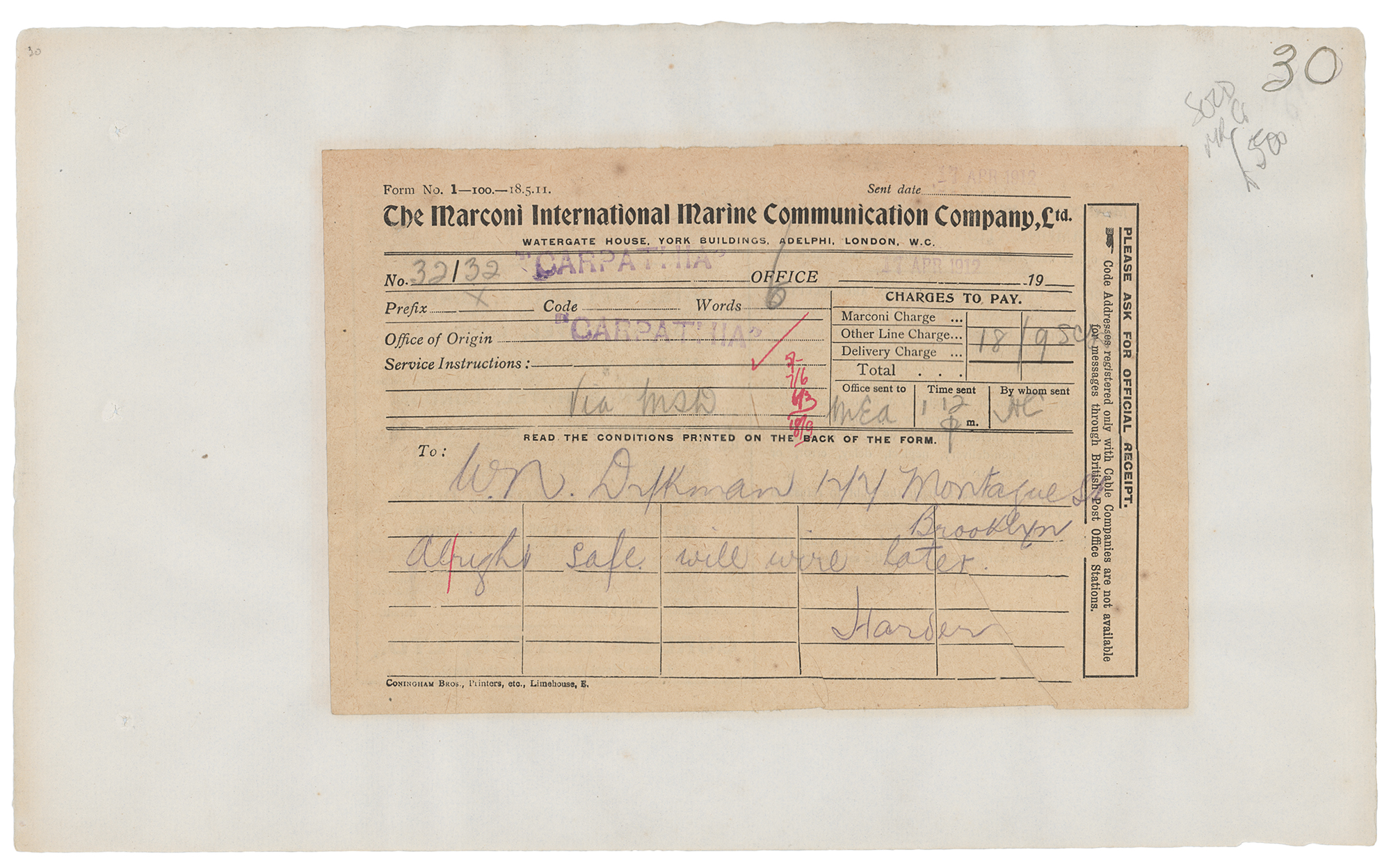 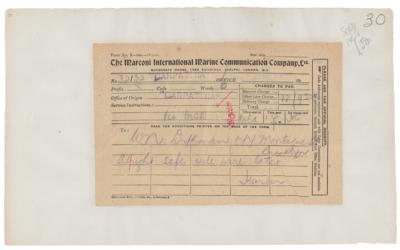 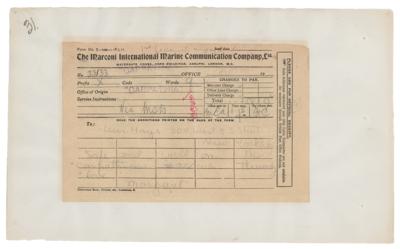 Two original Marconigrams sent on behalf of two survivors of the Titanic by operator Harold Cottam while aboard the Carpathia. Both are stamped “Carpathia,” dated to April 17, 1912, and affixed to opposite sides of a 13.75 x 8.25 album page, which was removed from an evidence book used by the British Enquiry during their investigation that was held between May and July 1912; these pages are accordingly numbered as 30 and 31.

The first is written in pencil on an 8.75 x 5.75 Marconi International Marine Communication Company telegram sheet, and reads: “To: W. N. Dykman 177 Montague St., Brooklyn / Alright safe will write later / Harder.” The sheet is numbered “32/32,” and was sent to “MEA” by “HC” [Harold Cottam] at 1:12 PM. The second, written in pencil on a telegram sheet, reads: “Mrs. Hays, 304 West 83 Street New York City / Safe and well on the Carpathian arrive Thursday, love, Margaret.” The sheet is numbered “33/33,” sent to “MEA” by “HC” at 1:15 PM. In overall fine condition. These documents were obtained by Titanic Historical Society members John and Vera Gillespie from John Booth, the author of the book, Titanic Signals of Disaster, published by White Star in 1993.

Telegraph operator Harold Cottam was a British wireless operator on the RMS Carpathia who fortuitously happened to receive the distress call from the sinking Titanic on April 15, 1912. His decision to awaken Captain Arthur Henry Rostron and relay the Titanic's message allowed the Carpathia to arrive at the scene hours before any other ship, consequently saving hundreds of lives.

First class passengers George A. Harder and his young bride, Dorothy, hailed from Manhattan, New York. After their rescue on Lifeboat No. 5 and safe return to America, the Harders were frequently asked to lecture about the Titanic disaster, but routinely refused. Like so many other men who escaped, George Harder found the stigma of surviving the Titanic disaster difficult to live down. He was one of several who later testified before the U.S. Senate Investigative Committee.

New York City resident Margaret Bechstein Hays was a first class passenger who survived the Titanic sinking after boarding the first lifeboat (No. 7), along with her two female cabinmates and her Pomeranian dog. Aboard the rescue ship, Miss Hays, fluent in French, volunteered to care for two young French boys who spoke no English and had been unclaimed by an adult relative. The boys were Michel and Edmond Navratil, whose late father Michel Sr. had been trying to take them to America after kidnapping them from their mother. They stayed in Miss Hays home, under the supervision of the Children's Aid Society, until the children's mother was located and brought to America to claim them.