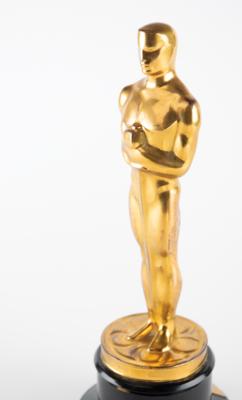 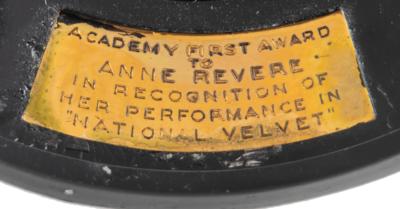 
Iconic original statuette awarded to actress Anne Revere for her role as Mrs. Araminty Brown in the 1944 MGM film National Velvet, starring the young Elizabeth Taylor, Mickey Rooney, and Donald Crisp. The award trophy measures 13.25? tall, weighs six pounds, and features an engraved plaque on the base, "Academy First Award to Anne Revere, In Recognition of Her Performance in 'National Velvet.'" A small plaque on the rear of the base is dated "1945." In very good to fine condition, with wear to the plaques and reverse of the statuette (mostly to reverse), and felt pad worn through on the base.

Anne Revere was nominated three times in the Best Supporting Actress category, recognizing her strong, matriarchal roles—as Jennifer Jones' mother in The Song of Bernadette (1943), Elizabeth Taylor's in National Velvet (1944), and Gregory Peck's in Gentleman's Agreement (1947). This trophy, awarded for her part in the classic horse racing film, represents her only win. A direct descendant of the patriot Paul Revere, she was steadfast in her ideals and stood in vocal opposition to the House Un-American Activities Committee—a stance that effectively ended her career in movies. After 1951, her place on the Hollywood blacklist denied any chance at another prize.

These award trophies are arguably the most coveted of all Hollywood collectibles, and they are very rarely available to the public at large. As the most famous and recognizable award in all of entertainment, this would be the pinnacle of any pop culture collection.