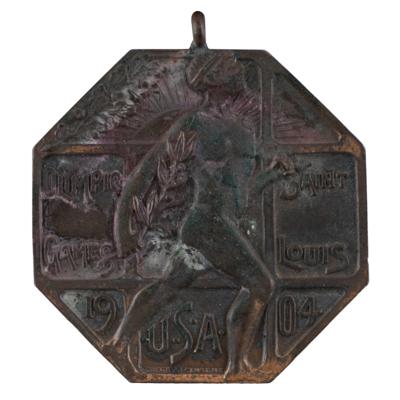 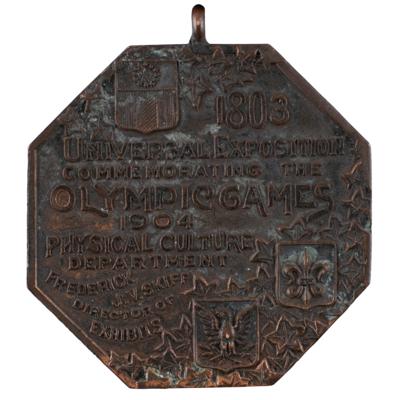 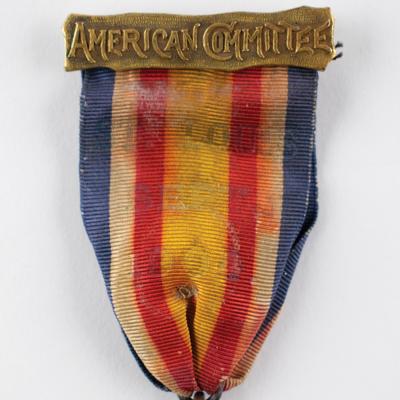 Extremely rare official's participation medal issued for the St. Louis 1904 Olympics. Copper, 40 mm, 30 gm (37 gm with ribbon), by Dieges & Clust, New York. The front, inscribed, "Olympic Games, St. Louis, USA, 1904," features an idealized nude athlete mid-stride with a laurel branch in his hand; the reverse features the lengthy text, "1803, Universal Exposition Commemorating the Olympic Games, 1904, Physical Culture Department, Frederick J. V. Skiff, Director of Exhibits," encircled by ivy leaves with the shield emblems of St. Louis, France, and USA. Issued only to officials to be worn as a badge, the medal is suspended from a multicolored ribbon faintly marked, “St. Louis, Sept. 1904,” with the upper badge bearing raised text: ”American Committee.” The medal features instances of discoloration, and the ribbon some slight staining. The 1904 St. Louis is the rarest and most coveted of all Olympic participation medals, with this example all the more desirable given the rare presence of its ribbon and badge.