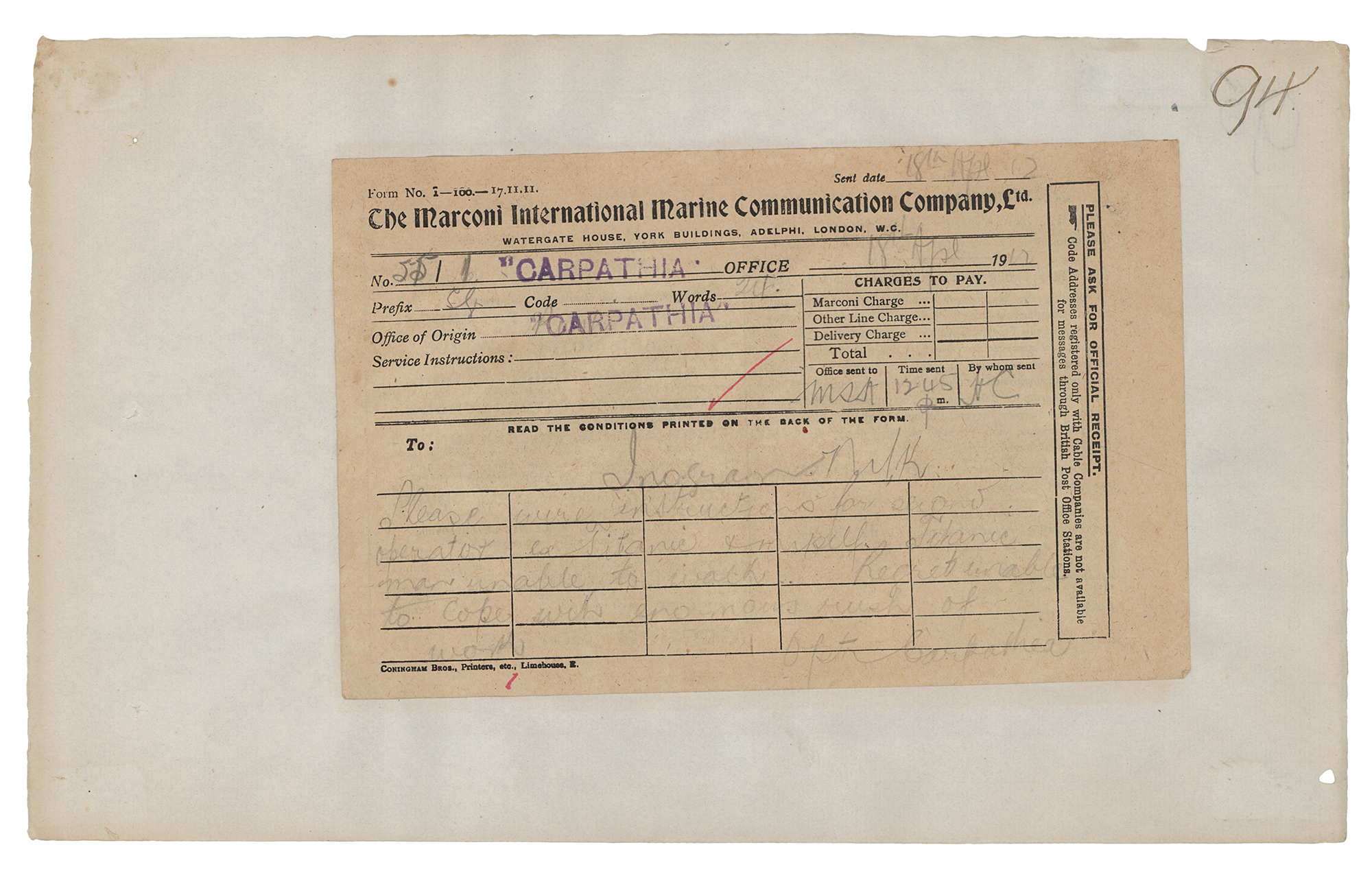 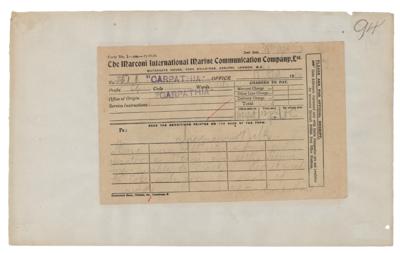 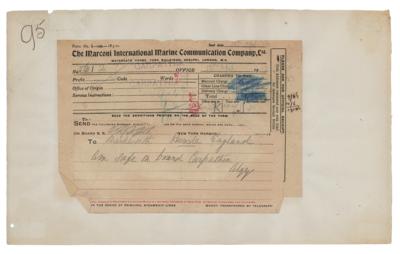 Two original Marconigrams sent on behalf of two survivors of the Titanic by operator Harold Cottam while aboard the Carpathia. Both are stamped “Carpathia,” dated to April 18, 1912, and affixed to opposite sides of a 13.75 x 8.5 album page, which was removed from an evidence book used by the British Enquiry during their investigation that was held between May and July 1912; these pages are accordingly numbered as 94 and 95. The first is written in pencil on an 8.75 x 5.75 Marconi International Marine Communication Company telegram sheet, and reads: “Please wire instructions for second operator ex Titanic & myself. Titanic man unable to walk. Regret unable to cope with enormous rush of work, Optr Carpathia.” The sheet is numbered “55/1,” and was sent to “MSK” by “HC” [Harold Cottam] at 12:45 PM.

Carpathia wireless operator Harold Cottam penned his own telegram hoping for relief from the immense workload. Here he alludes to Harold Bride, who survived as one of the Titanic’s telegraph operators and managed to assist with Cottam’s messages after being rescued aboard Carpathia, despite being unable to walk from frostbitten feet. Cottam fortuitously happened to receive the distress call from the sinking Titanic on April 15, 1912. His decision to awaken Captain Arthur Henry Rostron and relay the Titanic's message allowed the Carpathia to arrive at the scene hours before any other ship, consequently saving hundreds of lives.

The second, written in pencil on a New York Harbor Telegraph form, reads: “Barkworth, Hessle England, Am safe on board Carpathia, Algy.” This form is affixed to a Marconi sheet, numbered “56/2,” total charge of “19/10 ½,” sent by “MSK” to “HC” at 12:47 PM. First class passenger Algernon ‘Algy’ Henry Barkworth of Hessle, England, was a justice of the peace. As the ship sank deeper he pulled a heavy fur coat over his lifebelt, threw his briefcase into the water and jumped in, eventually swimming his way to the overturned collapsible lifeboat B. In overall fine condition, with light overall wrinkling.

These documents were obtained by Titanic Historical Society members John and Vera Gillespie from John Booth, the author of the book, Titanic Signals of Disaster, published by White Star in 1993; these pages, 94 and 95, are documented on pages 109 and 110 of the book.