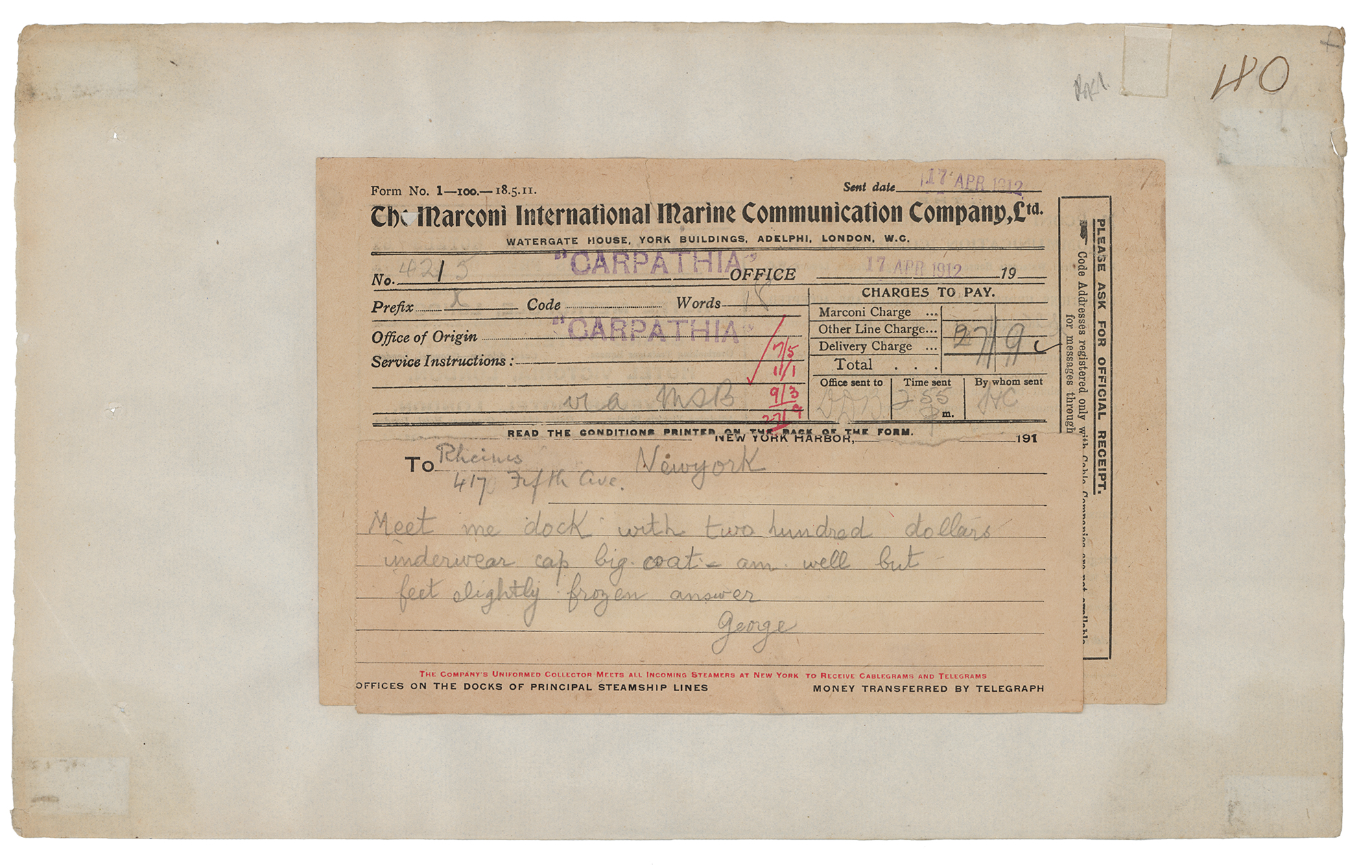 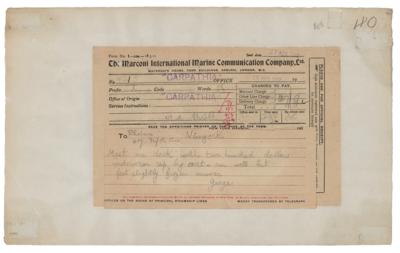 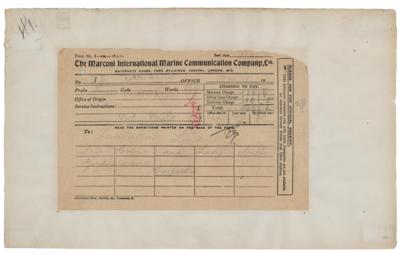 Two original Marconigrams sent on behalf of two survivors of the Titanic by operator Harold Cottam while aboard the Carpathia. Both are stamped “Carpathia,” dated to April 17, 1912, and affixed to opposite sides of a 13.75 x 8.5 album page, which was removed from an evidence book used by the British Enquiry during their investigation that was held between May and July 1912; these pages are accordingly numbered as 40 and 41. The first is written in pencil on a New York Harbor Telegraph form, which is affixed to an 8.75 x 5.75 Marconi International Marine Communication Company telegram sheet, and reads: “Rheims 417 Fifth Ave. New York, Meet me dock with two hundred dollars underwear cap big coat—am well but feet slightly frozen answer, George.” The Marconi sheet, numbered “42/5,” lists a charge total of “27/9,” with service instruction “Via MSB.” George Rheims was the president of a firm of Parisian milliners, who had escaped freezing death in the water by balancing on top of a waterlogged, upturned lifeboat.

The second, written in pencil on a Marconi form, reads: “Lucilation London, Sir Cosmo and Lady Gordon saved, Carpathia.” The sheet is numbered “43/6,” lists a charge total of “27/1,” with service instruction “Via MSB,” sent by “DDB” to “HC” [Harold Cottam]. Fashion designer Lucy Duff-Gordon and her husband Sir Cosmo Duff-Gordon, traveling first class, were a leading society couple of the day, and after rescue they were much criticized. During evacuation, the Duff-Gordons were lowered into a 40-man lifeboat holding just 12 people—most of them crewmen. Accusations were made that Sir Cosmo bribed sailors to ignore people in the water. Telegraph operator Harold Cottam was a British wireless operator on the RMS Carpathia who fortuitously happened to receive the distress call from the sinking Titanic on April 15, 1912. His decision to awaken Captain Arthur Henry Rostron and relay the Titanic's message allowed the Carpathia to arrive at the scene hours before any other ship, consequently saving hundreds of lives. In overall fine condition, with light overall wrinkling.

These documents were obtained by Titanic Historical Society members John and Vera Gillespie from John Booth, the author of the book, Titanic Signals of Disaster, published by White Star in 1993; these pages, 40 and 41, are documented on page 101 of the book.